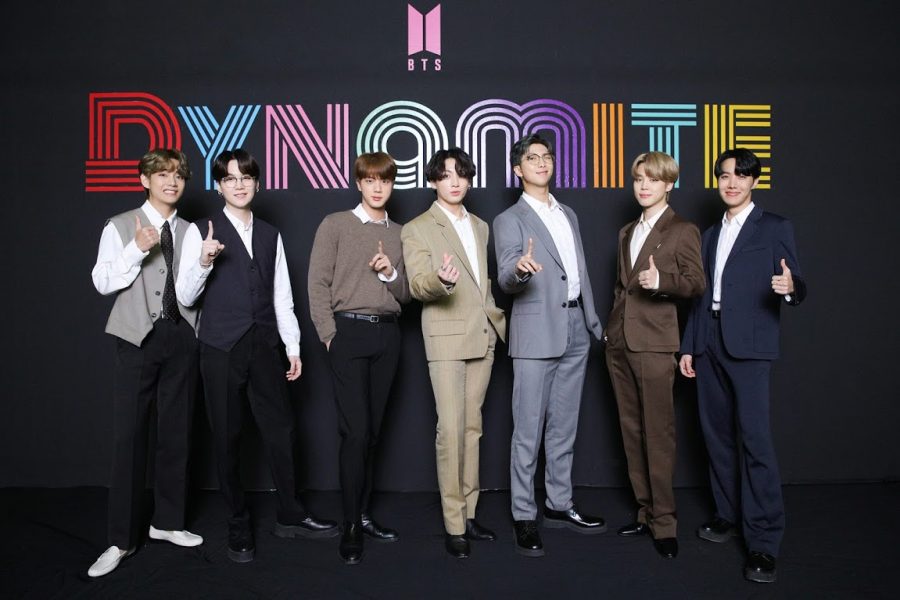 BTS after releasing their Grammy-nominated their first all-English hit "Dynamite" in 2020.

K-pop, South Korea pop music, has been around for more than two decades. Over the past five years, K-pop has gained a large global audience outside of South Korea. Top K-pop groups BTS and BLACKPINK have become synonymous with the genre, achieving great success in 2020 and propelling the industry to further heights for 2021.

Having debuted in 2013, BTS had their breakout in 2017 with their hits “DNA” and “Mic Drop.” The group consists of seven members: Jin, RM, J-Hope, Suga, Jimin, V, and Jungkook. They achieved huge successes with their albums Love Yourself: Answer (2018) and Map of the Soul: Persona (2019), which both topped Billboard 200. Army, the BTS fandom, has grown significantly over the years with fans from all over the world. Their 2019 collaboration with American singer Halsey “Boy With Luv” was also wildly successful.

BTS began 2020 with the release of their album MAP OF THE SOUL: 7 which also topped Billboard 200. The “7” in the title of the album represents the seven members of the group as well as the seven years they have spent together. Singles “Black Swan” and “ON” were widely successful, garnering millions of views on YouTube, while “Boy With Luv” continued its success. The latter two singles achieved Top 10 status on Billboard Hot 100 as well. The fourth single “Make It Right” featuring American artist Lauv also charted. The album’s themes touch on mental health and personal strength, and the members drew inspiration from the songs from their own lives.

Although the coronavirus pandemic forced them to cancel their Map of the Soul 2020 World Tour, BTS released their album BE in November. The headlining single “Dynamite,” released in August before the full album, debuted at number 1 on Billboard Hot 100. The fully English song was the first release by a fully South Korean act to top the chart, beating PSY’s “Gangnam Style” which peaked at number 2 in 2012. The song’s music video also broke and currently holds the record for the most-viewed YouTube video in 24 hours. The full album, released in November, also immediately found success, debuting at the top of Billboard 200. The album’s second single “Life Goes On” also debuted at the number 1 spot on Billboard Hot 100, making BTS the only act other than Taylor Swift to have releases simultaneously debut at the top spot of both Billboard Hot 100 and Billboard 200 charts.

Written during the thick of the pandemic, BE reflects life during quarantine and the current world situation with the presence of COVID-19. Most notably, the songs “Life Goes On” and “Fly To My Room” capture being at home while “Blue & Grey” focuses on mental health. Jin described the album as a “’page in our diary’” of the present times. He said, “’The album title Be represents ‘being’ and captures the honest thoughts and emotions we are feeling at the moment.”

Perhaps the most exciting milestone achieved by BTS in 2020 was their first Grammy nomination. The 7-member group was nominated in the “Best Pop Duo/Group Performance” category for “Dynamite.” They have already won multiple American Music Awards and Billboard Music Awards. If they win, they will become the first South Korean group to win all three major music awards in the US.

In 2021, V plans to release his solo mixtape. “’I’m exploring many different genres at the moment,’” he told Rolling Stone India. “’I’m trying out different styles within a deeper and wider range, so there will be songs with more depth as well as styles you haven’t seen from me before.’” An unreleased clip posted on Twitter in September (now deleted) delighted fans with a preview of the singer’s upcoming solo music.

Suga learned how to play the guitar during the quarantine. “I’m not trying to limit myself to a specific genre,” he said. “I simply want to be able to sing while playing guitar when I get older. That’s all.” Suga also releases solo music under the name Agust D and will likely release new music in 2020. Solo or not, music featuring Suga playing the guitar is highly anticipated.

If BTS releases new music in 2021 as a group, there is no doubt that they will continue to reach new heights. They have attracted millions of fans across the globe despite the language barrier. The group’s messages in their music also embody positivity, something much needed during this time.

Made up of members Rosé, Jisoo, Jennie, and Lisa, BLACKPINK has also attracted millions of fans across the globe, known as Blinks. The girl group debuted in 2016 and has since found great success in South Korea and now the rest of the world.

In 2020, BLACKPINK released THE ALBUM, their second studio album. Peaking at number 2 on Billboard 200, THE ALBUM features eight songs including collaborations with American artists Selena Gomez and Cardi B and three singles. “Ice Cream” featuring Selena Gomez peaked at number 13 on Billboard Hot 100 while “How You Like That” achieved Top 40 status. The “How You Like That” music video also briefly held the record for the most-viewed YouTube video in 24 hours before being topped by BTS’s “Dynamite.”

THE ALBUM showcases Rosé, Jennie, and Jisoo’s powerful vocals as well as Jennie and Lisa’s terrific rapping. Each song embodies sweet and charming elements that have a unique edge, perfectly representing the group’s name (“pink” meaning they look sweet, “black” meaning they act fierce despite looking sweet). With three out of the four members fluent in English, many of the songs on THE ALBUM contain many English lyrics as well.

TWICE, a girl group consisting of nine members, ended 2020 as the third most-streamed K-pop artist according to Spotify Wrapped, just behind BTS and BLACKPINK. Their most recent album Eyes Wide Open peaked at number 72 on Billboard 200. Listen to the album’s lead single “Cry for Me” here.

Stray Kids, a boy-group consisting of eight members, ranked fourth as the most-streamed K-pop artist according to Spotify Wrapped. At the beginning of 2020, Stray Kids kicked off their first-ever world tour, performing in New York, Los Angeles, Miami, Phoenix, San Jose, Atlanta, Dallas, and Chicago before the coronavirus pandemic halted them. They also released English versions of their songs “Double Knot” and “Levanter.” In March 2020, they also made their Japanese debut with SKZ2020.

Red Velvet consists of Irene, Seulgi, Wendy, Joy, and Yeri. The girl group was the fifth most-streamed K-pop artist according to Spotify Wrapped. They debuted in 2014 and have since gained a large global audience. In 2020, they appeared as the K-pop trolls in the animated movie Trolls World Tour. Their 2020 EP The ReVe Festival: Finale peaked at number 3 on Billboard’s World Albums chart. Members Irene and Seulgi also had their debut as a unit with their EP Monster.

SEVENTEEN, a 13-member boy group, is best known for their jaw-dropping synchronicity best seen in their 2017 hit single “Don’t Wanna Cry.” They were the seventh most-streamed K-pop artist in 2020 according to Spotify Wrapped. The group has found great success in the US since their debut in 2015, most recently appearing on The Late Late Show with James Corden to perform their new single “Home;Run” from their new album ;[Semicolon].

NCT, a 23-member boy group divided into teams including NCT U, NCT 127, and NCT Dream, released more than 50 songs in 2020, selling millions of albums. Two members, Shotaro and Sungchan, also joined the group this year, appearing in NCT U’s single “Make a Wish (Birthday Song).” Although they are not as popular in the US, NCT will continue to reach greater heights globally in 2021.

ENHYPHEN debuted on November 30th, 2020 after the seven members won the survival show I-Land. The boy group’s debut EP BORDER: DAY ONE immediately broke a first-week sales record, and they won Rookie of the Year at a major Korean award show and performed at another. Listen to their debut single “Given-Taken” here.

Aespa debuted on November 17, 2020, with their single “Black Mamba.” The girl group consists of four members Winter, Karina, Ningning, and Giselle. They have already broken the previous record for the fastest debut track to reach 100 million views on YouTube, setting the new record at 51 days.

Sophomore Clare Ryan, who’s favorite group is BTS, said, “My top 3 favorite songs by… BTS include: ‘Your eyes tell,’ ‘Life Goes On,’ and ‘We are Bulletproof: the Eternal’” because “the melody and the lyrics from each of those pieces are so heartfelt and, as an Army, it really speaks to me and the rest of the fandom.”

“I’m looking forward to whatever they have to offer next in their journey,” Ryan continued. “Every time they release a new track or album, I’m always excited.”

Junior Catelyn Arnold said her favorite groups are Stray Kids and SEVENTEEN because, “Their lyrics are always very meaningful, and they’re both self-produced groups, so they personally put so much effort into their music, making it tell stories and connecting to people’s emotions.” She said, “A few of my favorite songs from each group would be, Stray Kids: ‘Sunshine,’ ‘Blueprint,’ ‘Mixtape #3,’ ‘Grow Up,’ and ‘Ex’… For SEVENTEEN: ‘Hug,’ ‘Smile Flower,’ ‘Pinwheel,’ ‘Kidult,’ and ‘My My.’”

“I think in 2021 I’m just looking forward to more music and watching them have fun on variety or reality shows,” she said, also adding, “I also want to see them have free time because I know that the industry puts so much pressure on them, and I want them all to take time to rest and relax and recharge.”