The Conference Championship Happens Despite COVID-19 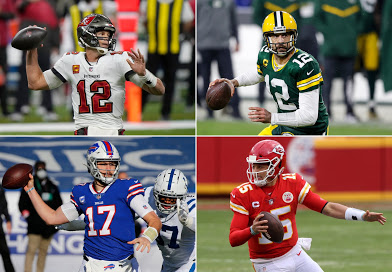 Tom Brady (top left), Aaron Rodgers (top right), Josh Allen (bottom left), and Patrick Mahomes (bottom right) have all led their teams to the doorstep of Super Bowl LV each with fantastic seasons in their own right.

Many did not believe that the NFL could play a whole season during the devastating COVID-19 pandemic. But here we are at conference championship weekend with four teams fighting for two spots in Super Bowl LV. It was a bumpy road at times to get here, with delays and postponements of games being commonplace and battles with COVID-19 ravaging team rosters at points throughout the season. But we have made it nonetheless. NFL fans expect The AFC and NFC championships this year are expected to be some of the most exciting and close games of the season. The Buffalo Bills will travel to Kansas City to play the defending champions, the Chiefs, to decide the AFC victor. Meanwhile, the Tampa Bay Buccaneers and Green Bay Packers will battle in Lambeau Field in Green Bay to see who will punch their ticket to Tampa for the Super Bowl.
The Buccaneers and Packers game will occur at the earlier time at 3:05 PM EST, and the Bills vs. Chiefs matchup will take place at 6:40 PM EST. Both games offer separate and intriguing storylines coming into Sunday. The NFC Championship gives us a matchup of two legendary quarterbacks who have surprisingly barely met head to head. Tom Brady and Aaron Rodgers have met three times throughout their careers, with Brady winning two of them. Most recently, earlier this season, the Bucs blew out Rodgers and the Packers in Tampa. The Packers are favored at home. They will return to the big game for the first time since Aaron Rodgers’ first and only Super Bowl appearance when they defeated the Pittsburgh Steelers. On the other side, the Bucs would have the first Super Bowl home game in history waiting for them if they can win this week, which would also keep the dream of Brady’s seventh Super Bowl ring alive. The AFC Championship game offers a different intrigue from the other game. It features two of the game’s best young quarterbacks, with Buffalo’s Josh Allen taking on Kansas City’s Patrick Mahomes. The Chiefs are looking to be the first team to repeat as champions since the Patriots in 2003 and 2004. The Bills are looking to rewrite a tortured past of failure and disappointment. They hope to improve an 0-4 Super Bowl record and over two decades without a playoff win before this season. The combination of Josh Allen and wide receiver Stefon Diggs has emerged as an offensive duo. They look to defy all critics and expectations by bringing the crazed fanbase of the Bills, known as Bills Mafia, their first Super Bowl title. All four teams have a great shot at the title and are all very evenly matched, which should make for some entertaining football this weekend.
When asked who he thinks will play in Super Bowl LV in Tampa, Hingham High School junior Pierce Bromley said, “I think it will be a matchup between Rodgers and Mahomes because they are the two best quarterbacks in the league and the Chiefs and Packers both have great wide receivers in Tyreek Hill and Davante Adams”. Junior at HHS, John Choueiri has a slightly different opinion as to when asked the same question, he said, “I think the Bills are going to make it because they haven’t been to the Super Bowl in decades so I think it’s their year and I think they’ll play the Packers”. Regardless of who wins either game, NFL fans can rejoice in seeing some of the game’s best players compete over a spot in the Super Bowl.