Amanda Gorman: Rising to the Occassion 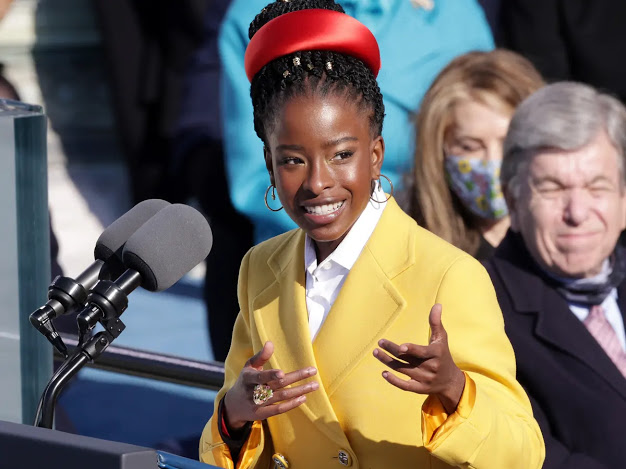 Gorman performing "The Hill We Climb" at the inauguration of Joe Biden on January 20th, 2021.

“When day comes, we can ask ourselves where can we find light in this never-ending shade?” Amanda Gorman opened her impactful poem as she gazed upon the Capitol lawn and a new dawn for the United States of America on January 20th, 2021. Gorman inspired and enthralled the nation with her recitation of “The Hill We Climb” at the Presidential Inauguration of Joe Biden.

The first National Youth Poet Laureate delivered a resounding piece to the American people, emphasizing the hope and unity of the nation’s past, present, and future. While the poem lasted five minutes and forty-three seconds, its words will persist long beyond the afternoon at the Capitol building.

Born in Los Angeles in 1998, Amanda Gorman discovered a passion for the written word and performance as early as second grade. Throughout her career, Gorman faced and continues to face a speech impediment, an affliction she shares with her idol Maya Angelou and President Joe Biden. Gorman told the LA Times, “I don’t look at my disability as a weakness, it’s made me the performer that I am and the storyteller that I strive to be.” Titled LA’s youth poet laureate at 16, Gorman went on to attend Harvard University as a major in sociology.

Handpicked by President Biden in late December to perform at the Inauguration, the 22-year-old prodigy from Los Angeles tells BBC she “screamed and danced her head off” upon hearing the news. Throughout her writing process, Gorman researched previous American figures such as Frederick Douglass and Abraham Lincoln who were tasked with drawing a divided nation together through spoken word. The author also drew upon Hamilton lyrics by Lin-Manuel Miranda, and completed her poem on the day of insurrection by supporters of former President Donald Trump at the Capitol.

Gorman addressed the effect of the attack on the Capitol in her work to LA Times, saying, “I wasn’t trying to write something in which those events were painted as an irregularity or different from an America that I know… I crafted an inaugural poem that recognizes these scars and these wounds. Hopefully, it will move us toward healing them.”

Furthermore, Gorman remarked in an interview with CNN that the Capitol riot encouraged her to convey a message of unity in her performance, creating “the type of poem I needed to write, and it was the type of poem the country and world needed to hear.”

Through watching the CNN interview, sophomore Lily Ehler was glad to “learn more about her and how she overcame her struggles with her speech impediment.” She continues that upon hearing Anderson Cooper call Gorman awesome, she thought “it was the perfect description of her.”

Mrs. Roth, an English teacher at Hingham High School, was overjoyed that Gorman was provided a platform for the world to consider her message at the presidential inauguration. “I was thrilled to see that a young-adult poet was chosen,” Roth says. She admires Amanda Gorman as a “powerful, vibrant, and well-informed voice of her generation.”

Succeeding literary legends such as Robert Frost and Maya Angelou in the role of inaugural poet, Gorman fulfilled the job of saying the right words at the right time at a turning point of the nation. Before Joe Biden, the presidents with an inaugural poet performance were Barack Obama, Bill Clinton, and John F. Kennedy.

Tess Driscoll, Hingham High School senior and student of Mrs. Roth was also inspired by Gorman’s inaugural presentation. “I tried to see if her book was out yet but it wasn’t, so that was a bummer,” Driscoll says, in reference to Change Sings, Gorman’s upcoming release. An avid fan of language arts, Tess Driscoll is amazed that “[Amanda Gorman] is just out of college and already so successful.”

The inaugural performance catapulted Amanda Gorman into the worldwide spotlight; Gorman signed with IMG models a week after her performance. The Hollywood Reporter claims the agency will provide editorial opportunities and focus on brand endorsements for the newly renowned poet. In the same week, the NFL announced Gorman’s upcoming recitation at Super Bowl LV.

Amanda Gorman’s three upcoming books, including Change Sings and The Hill We Climb and Other Poems scheduled to publish on September 21, climbed to the top of the bestseller list on Inauguration Day. A collectable edition of the inaugural poem is scheduled for release in March. Penguin Random House announced the initial publishing run for the three books totals to 1 million copies each.

As Gorman transitions from presenting at venues of the nation’s highest officials to those of riled football fans and beyond, her genius and well-placed themes in her works will resonate with even broader audiences. Undoubtedly, Gorman will continue to rise to the occasion.