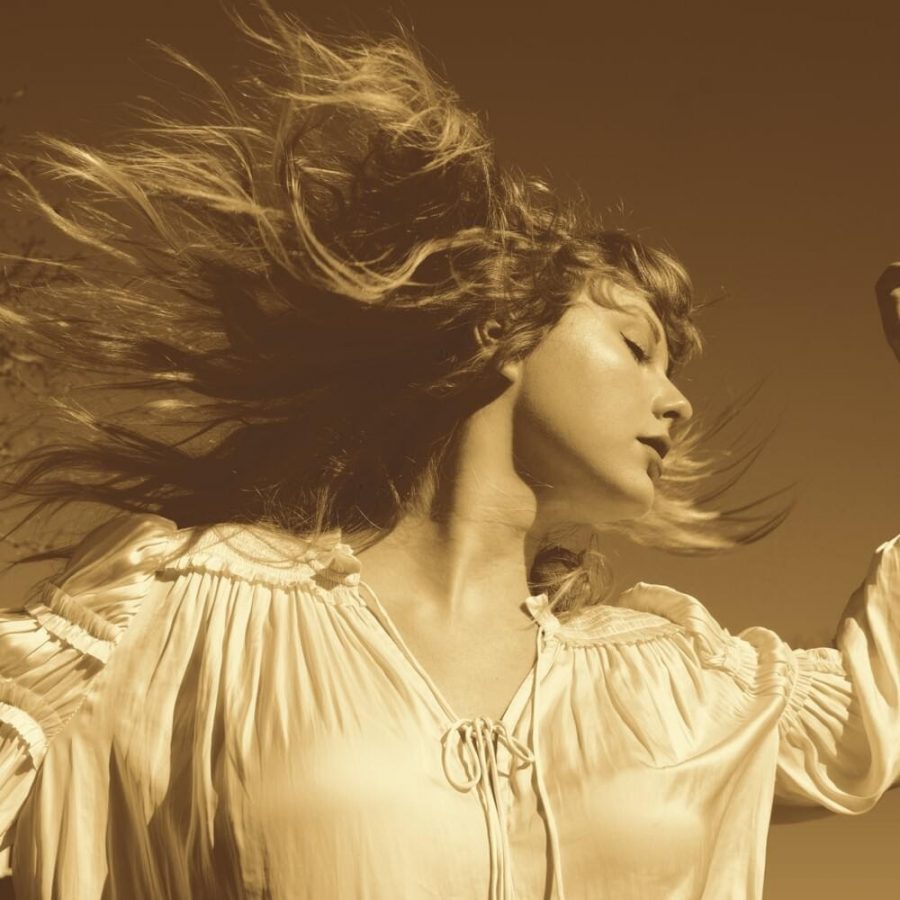 Taylor Swift's "Fearless (Taylor's Version)" is now available to pre-order on her website taylorswift.com. Her album cover for the re-recorded "Fearless" (2008) nods to the original album cover.

Last Friday, at midnight, music icon Taylor Swift released her first re-recording, “Love Story Taylor’s Version)” sending fans, commonly referred to as Swifties, everywhere into a flurry of excitement. Swifties know the significance of this step and are elated for the 31-year-old singer to embark on her journey to reclaim control over her music.

Senior Julia Burm commented, “I was so excited about “Love Story (Taylor’s Version)!” It will be so nice to listen to her music without feeling guilty and contributing to Scooter Braun’s bank account.”

What Burm is referring to is Swift’s legal battle over her masters. Signing onto Big Machine Records at 15-years-old, Swift handed over the rights to her music, something very common for young musicians; however, years later once she had the resources and desire to buy her old catalog–her music from her self-titled 2006 debut album up through her 2017 reputation album–she was given very limited options.

In a Tumblr post in 2019, Swift, who split from BMR in 2018, explained, “For years I asked, pleaded for a chance to own my work. Instead, I was allowed to sign back up to Big Machine Records and ‘earn’ one album back at a time, one for every new one I turned in.”

Knowing that taking this deal would only further push her away from owning her music, Swift walked away from BMR and their negotiations. Once she did, Scott Borchetta, of BMR, sold Swift’s catalog to Ithaca Holdings and Scooter Braun for $300 million–allegedly without Swift’s prior knowledge–crushing Swift, who had never imagined anything as cruel as this. Swift called the sale “my worst-case scenario” further explaining in the Tumblr post that “Any time Scott Borchetta has heard the words ‘Scooter Braun’ escape my lips, it was when I was either crying or trying not to. He knew what he was doing; they both did. Controlling a woman who didn’t want to be associated with them.”

Although devastated, Swift was not going to give up. In July 2019, singer Kelly Clarkson tweeted an idea to Swift to re-record her entire catalog to devalue her masters.

For this to work, fans would have to abandon her original work and only listen to her re-rerecords. As risky as it is, Swift has a strong fanbase whom Swift knows will devote its time to encouraging others to listen to the re-recorded versions. Over time, the transfer of streams from her old music to her re-recorded music will translate to Swift essentially owning her work.

In a Good Morning America interview in August 2019, Swift announced that her contract would allow her to re-record albums from her debut Taylor Swift until 2014’s 1989, starting in November 2020. (2017’s reputation will not be re-recorded now, likely because according to Rolling Stone, most contracts only allow artists to re-record either until “the later of two years following the expiration of the agreement or five years after the commercial release.” Reputation has met neither requirement.)

Senior Nathan Lavoie shared, “As a huge Swiftie and feminist, I stan Tay Tay for stepping up and re-making her old music which started her career, to actually get money out of it which she so deserves!!”

Senior Hope Thompson added, “I grew up listening to Taylor, and when I heard she was re-recording her old albums, the little kid in me sparked up again! Her music was honestly the basis of my childhood.”

Already on Twitter, fans promise to stick with Swift and listen strictly to her new music once it becomes available. User @hauntedidea tweeted, “Can we all pls collectively agree not to stream her the old versions when Taylor’s version drops??”

(Note: Listening to hard copies such as previously purchased albums will not harm the re-recording process, but continuing to stream Swift’s old music on music services such as Spotify will. Fans should to only listen to “Taylor’s Versions” of songs from Taylor Swift to Reputation to devalue what Scooter Braun and Ithaca Holdings own.)

Ever since November, fans have been wondering when Swift would drop her first re-recorded song or album. On December 2, actor Ryan Reynolds, a friend to Swift, released a commercial for Match that sampled some of the re-recorded “Love Story.” Fans were ecstatic but continued to beg for more re-records. Many thought something would happen soon. Then, on December 11, Swift surprised everyone with Evermore, her ninth studio album.

This pacified Swifties for a while, but because the Taylor Swift fandom is speculative. Swift likes to play with clues, with re-recording conspiracies continued to circulate for months. When Swift started posting in February with two yellow hearts, the speculation picked up. Fans all over social media agreed that the recent, repeated usage of two yellow hearts meant something Fearless related since Fearless’s signature color is yellow and is also Swift’s second album. Many fans felt confident that Swift would be releasing some sort of re-recorded news, either the entire Fearless album or “Love Story” around Valentine’s Day.

Then, on Wednesday, February 10, Good Morning America tweeted that Swift would be on their show the following morning with a “new surprise announcement.” Ready for some sort of re-recording news, fans tuned in for Swift’s appearance. Swift came on at 8:13 a.m. announcing that she would be releasing “Love Story (Taylor’s Version)” at midnight, but she would also be releasing the album Fearless (Taylor’s Version), complete with six, unreleased songs from the Fearless era, “very soon.”

A little after the GMA announcement, Swift posted on her social media about the re-recordings of Fearless. Swift explained, “artists should own their work for so many reasons, but the most screamingly obvious one is that the artist is the only one who really *knows* that body of work.”

Swifties also quickly recognized the capitalization of certain letters in the post spelling out “APRIL NINTH.” Fans hoped this would be the date when Swift would release the entire re-recorded Fearless, and the pre-order option on her website now confirms this date. The website also features the tracklist which confirms that her new version will include all 19 tracks off of her 2009 Fearless Platinum Edition, “Today Was A Fairytale” from the 2010 film “Valentine’s Day”, and the six songs from “The Vault.’

Junior Maddie Aylward shared, “I think that the news about Taylor re-recording her albums is a whole new level of excitement that is different than any other announcements of hers. Her new albums were an amazing surprise, but I think the re-recording will affect people differently.”

Twitter user @andstolenstarez chimed, “I can’t wait to replace all the fearless songs on my playlists to Taylor’s versions and never give these greedy men any of my streams.”

Junior Lexi Nolan also commented, “It’s great to have something to look forward to in these colder, more sad months of quarantine. So much of her music was a big part of my childhood and revisiting that will be so happy.”

After dropping “Love Story (Taylor’s Version)” at midnight, fans rejoiced at the beginning of something very important to Swift and themselves.

Burm loves the re-record and shares, “It is so exciting to hear the song for the first time again. I cannot wait to hear all these songs with her evolved voice and style. I am happy to switch to only ‘Taylor’s Versions.’”

Thompson elaborated, “Even just hearing the newly released version of “Love Story” made old memories of dancing in my room flood back in. I can’t wait for the rest of it all, especially the new songs coming out of ‘The Vault.’”

The world now has some closure with news of Fearless (Taylor’s Version) and a budding friendship between Dionne Warwick and Taylor Swift, so hopefully, this will hold fans over for a while. As a fellow Swiftie myself, however, I can confirm that long story short, this is very unlikely. Swifties have a difficult road ahead to convince the world to only listen to “Taylor’s Versions,” but, if her fans are as passionate as Swift is–we are–, these things will change.