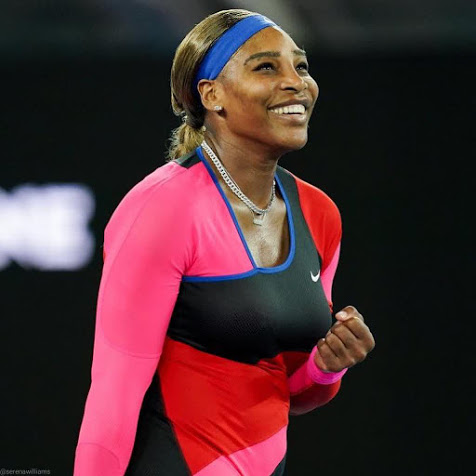 Serena smilies through her loss with grace.

For the second time, Serena Williams lost to Naomi Osaka 6-3, 6-4 in the 2021 Australian Open semifinals in front of 7,000 spectators, about half the Melbourne stadium’s capacity, due to COVID-19. Japan’s Naomi Osaka also defeated Williams at the 2018 U.S. Open Final. She later claimed the title of champion by defeating Jennifer Brady this year in the 6-4, 6-3 women’s singles final.
Williams’ and her older sister, Venus’s father, taught the two Compton sisters how to play tennis on the Los Angeles public courts. They later became professional stars in 1994 and 1995. Serena won her first Grand Slam singles title at the 1999 U.S. Open. Serena and Venus both won gold medals in doubles at the 2000 Olympics and many more, establishing themselves as fierce competitors and changing the game of tennis on and off the court to include more diverse players.
39-year-old Serena has not let any setback, including age, interfere with her strong presence on the court. However, she lost several crucial matches after returning to the game in 2018 after giving birth to her daughter. Many fans have since questioned how long the 7th ranked player in the world would remain competing.
This year was Serena’s opportunity to reach Margaret Court’s record of 24 Grand Slam singles titles. Serena started the 75-minute match strong with a 2-0 lead, but 23-year-old Osaka brought her A-game with six aces. In an emotional post-match press conference, Williams admitted, “I just made so many errors.” After Williams was asked if she would retire after her crushing defeat, she left fans on a cliffhanger by responding, “If I ever say farewell, I wouldn’t tell anyone.”
Like millions of fans, many Hingham High students anxiously watched the 2021 semifinal and were saddened to see Serena’s defeat. Kate Radulski, a sophomore on the Hingham High Tennis Team, remarked, “I was super surprised that Serena lost because she’s the face of the Australian Open. I grew up watching her and seeing her dominate on the court, and it was disappointing to see her not making it to the finals. However, I believe that she will do better in the next tournament.” Local freshman Grace McCoy also said, “I was super shocked to hear about Serena’s loss because she is such a strong tennis player. ”
Serena Williams showed remarkable resilience and strength after the loss and captioned a smiling picture of herself on Instagram, saying, “This proud mama marches on.”