How to Improve Major League Baseball and Enhance Fan Experience 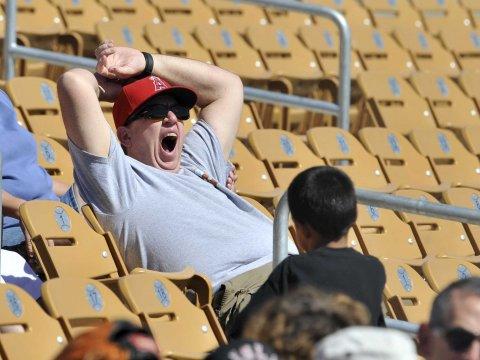 Here is a look at a fan yawning while in attendance of 3 hour and 28-minute long game that featured a 1-0 win by the Tampa Bay Rays over the New York Yankees.

Baseball is known for being “America’s Pastime”, as the sport is filled with traditions, foods, ballparks, music, and teams that have all been around since the 1800s. However, despite all of the classic features of America’s game, the sport cannot succeed without one major thing: fans. For a sport that was already experiencing a loss of popularity due to the slow pacing of the game, the COVID-19 pandemic caused even more baseball fans to vanish away.

Both baseball fans and non-baseball fans always enjoy attending live games at ballparks. Every ballpark provides fans with an atmosphere like no other, mouth-watering food, exclusive giveaways, warm weather during the summer months. Additionally, unlike other sports, each ballpark has different dimensions and unique elements that separate themselves from the rest such as Fenway Park’s Green Monster and Wrigley Field’s iconic ivy-lined brick walls. All sports fans love seeing their favorite team play right before their eyes, and baseball is a slow-paced and relaxing sport, so fans can easily follow along with the game when they are at the ballpark.

However, watching baseball on television is very far off from the in-person product. When fans were prohibited to attend live games because of the pandemic, TV ratings began to plummet. While baseball is a classic sport, in my opinion, the lack of modernization and stubbornness of Major League Baseball’s ownership will prompt more fans to disappear from the game.

The average time of an MLB game has steadily increased since the sport’s genesis, and this season the length reached 3 hours and 9 minutes. Baseball needs some fresh changes to fix the slow pace, draw fans back to the sport, and attract a younger audience. Luckily, baseball has an extensive network of minor league teams to test their new ideas before they are implemented in the Major Leagues. In my opinion, right now is the perfect time for the MLB to execute these new ideas, as almost all ballparks are lifting restrictions and allowing fans to attend games at full capacity. So, without further ado, here are some changes that I believe will improve Major League Baseball and enhance the experience of the fans.

While in between pitches, pitchers have to read the signals of the catcher behind the plate, who decides which type of pitch to throw and where to throw it. In Minor League Baseball, the pitch clock is limiting this process to 20 seconds and even 15 seconds in one league. Overall, the pitch clock has been one of the most anticipated changes in baseball for years now and while some players will experience a learning curve, the amount of time it will save throughout the game makes it a must-have in the Major Leagues right now.

Hingham Middle School 7th grader Will Carr elaborated on Boston Red Sox pitcher Nick Pivetta’s fast-paced pitching style, “As a Red Sox fan, I believe that Nick Pivetta is a perfect example of what the Major League pitchers should be doing. Even without a pitch clock in the Major Leagues right now, Nick doesn’t waste any time in between pitches and the games go by a lot quicker when he is on the mound.”

2. Add A Designated Hitter to the National League

In Major League Baseball, there are two leagues, the American League and National League. The American league has a designated hitter position, in which the player is only allowed to hit and cannot play in the field. In the National League, however, pitchers have to hit. While it can be a funny sight to see an inexperienced pitcher step up to the plate and try to hit a blazing 100 mile-per-hour fastball, ultimately this rule is bad for the game and I never understood why it was in place. Instead, I believe that there should be a designated hitter position in both leagues as it is very rare to see a pitcher get multiple hits in a game. Baseball fans have seen players like David “Big Papi” Ortiz, Edgar Martinez, and Frank Thomas make hall-of-fame careers as designated hitters in the American League, so why not have this rule in place in the National League? This rule change would increase the number of high-scoring games and home runs in the National League, which is what the fans love to see, so I believe that this rule would help the MLB tremendously.

Every other sport does a great job of marketing the super-star players and big personalities within their leagues, but the MLB has not been successful in this aspect of the game. Have you seen many baseball players in commercials lately? The answer is most likely no. The best player in baseball, Mike Trout, would probably not be recognized by most people in public despite playing for a big-market team in Los Angeles.

The billionaire entrepreneur and Dallas Mavericks owner Mark Cuban calls this the “Happy Gilmore Affect.” Just like Adam Sandler in the “Happy Gilmore ” movie, Cuban believes that sports fans love or love to hate athletes with personality and they will watch them play and buy their jerseys as a result.

In my opinion, the MLB has some of these types of players: Los Angeles’s Trevor Bauer pitched a game while purposely closing one eye, San Diego’s young-stud Fernando Tatis Jr. is known for his high-energy play and constant display of emotion and celebratory moves, and the two-way Japanese supertsar Shohei Ohtani was a league-leader in both home runs and earned run average as a pitcher and hitter. However, the MLB needs to market these players better by showing more of their games on national television, adding these players to commercials, and pushing out their merchandise.

Mark Cuban also believes that the only true rivalry left with national interest in the sports world is the famous Boston Red Sox versus the New York Yankees rivalry. Hingham High schooler Tommy Barnet agreed with Cuban as he said, “I always enjoy watching these games and it is truly the best rivalry in sports.” As a longtime Boston resident and Red Sox fan, I always appreciate watching the big personalities in these games and believe that they always provide fans with the looming possibility of a benches-clearing fight breaking out among both fans and players. In my opinion, the MLB needs to take advantage of this age-old rivalry and showcase more of the Red Sox versus Yankees games on national television.

Honorable mention suggestions: limiting the number of games in a season, adding events to all-star weekend (pitching contests, etc.), adding an international series, and moving the MLB draft to the offseason.