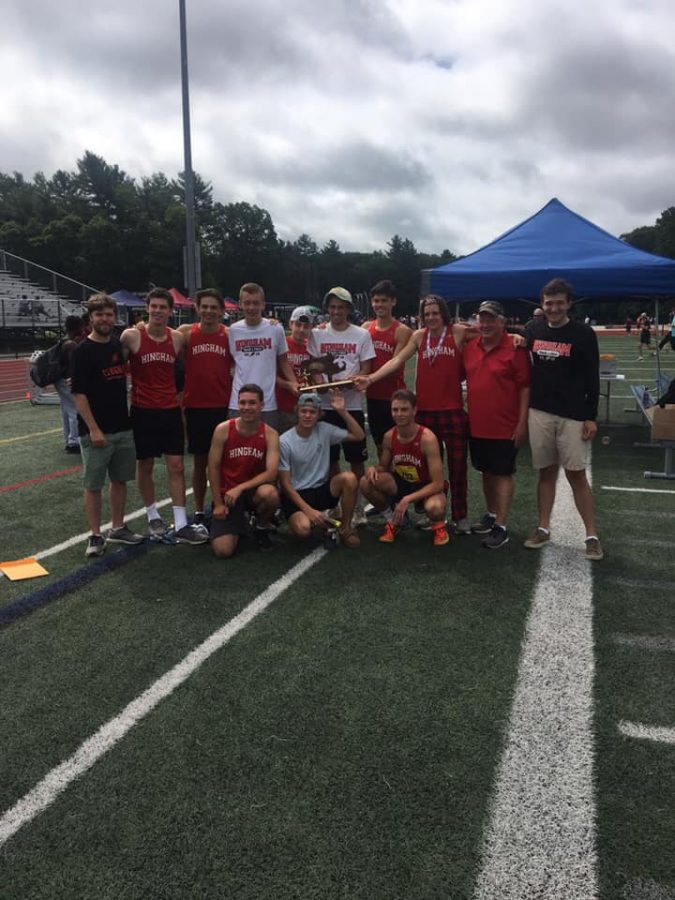 The HHS Boys' Track Team poses with their trophy after being named D1 South State Champions.

On Friday June 18th and Sunday June 20th, 56 Hingham track athletes ran at the MIAA D1 South State Championships at Hingham High School. Competing against the top athletes from 30 other schools, both the boys’ and girls’ track teams performed incredibly well, with many athletes setting personal records and meeting long-term goals. Though it was Hingham’s first year competing in Division 1, the boys’ team placed first, making them the MIAA D1 South state champions.

Hosting the meet was an enormous undertaking for Hingham, and many athletes volunteered to help coaches and officials run the meet. One of the volunteers, junior Alex Denning, remarked that, “I had a lot of fun volunteering with the hurdles events, as well as when I was watching everyone compete. It was great to be part of the team this year, and all my teammates did great on Friday and Sunday.”

Captain Pria Parker, who placed 4th in the mile on Friday and qualified for All-States, said that, “It was great to have the meet in Hingham, and props to all of the volunteers for making it run so smoothly! I’m so proud of everyone who ran– there were some great performances across the board.” Parker, along with Maeve Lowther, Sydney Driscoll-Gannon, and Sarah Burke, also ran in the 4×800 relay and qualified for All-States in that event as well.

To see the complete list of results from Friday and Sunday, click here and here. Based on their performances at the D1 South meet, 18 Hingham athletes qualified to compete at All-States, where they will run, jump, or throw against top athletes from across the entire state.  Congratulations to all who competed on Friday and Sunday, and best of luck to the All-State qualifiers!