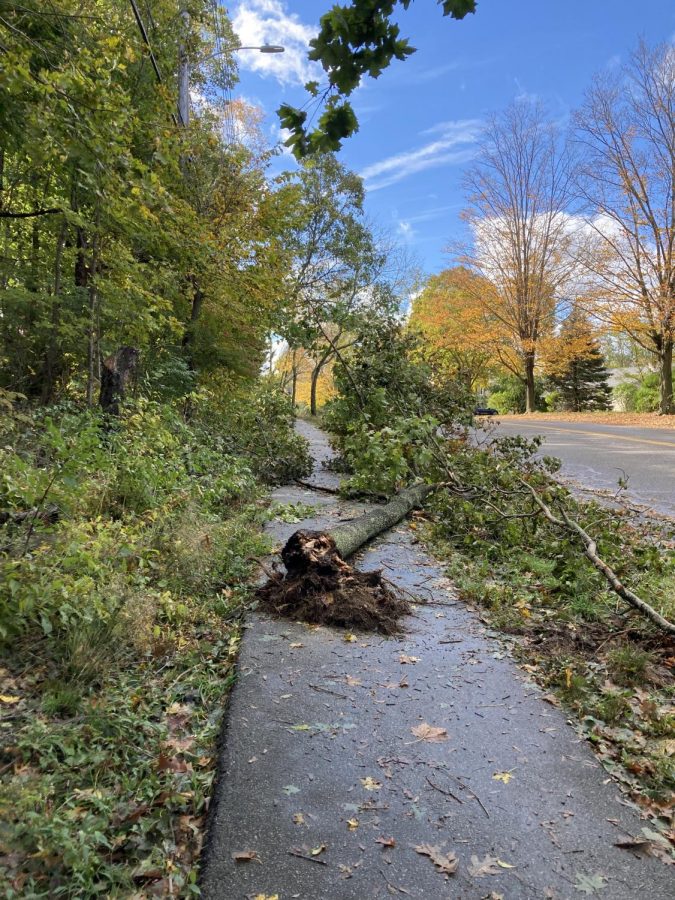 A fallen tree with visible roots bloks the sidewalk on Downer Avenue.

On the morning of Wednesday, October 27, 2021, students and their families woke up to a day off from school. School was canceled for the day because of a nor’easter, and heavy rain and strong winds were already underway. As the storm progressed, many families, as well as the school, lost power. By mid-afternoon, school was called off for the next day — Thursday, October 28, 2021.

By Friday, October 29, 2021, students and their families emerged from their homes to find uprooted trees and piles of branches scattered on every street. Cleanup efforts were already underway as landscapers worked hard to clear away damaged and potentially hazardous tree branches. The greatest challenge was clearing away branches that had fallen in the way of power lines, which required the electricity to be turned off. This resulted in power outages well into Thursday and Friday.

Senior Dominic Kanter echoed this sentiment stating, “It was crazy seeing the extent of the damage caused by the storm, especially when driving around town and seeing all of the uprooted trees.” Of the power outages, Kanter said, “I was lucky enough to only lose power for a handful of hours, but I think the call to cancel school was definitely in the best interest of the safety of all students, and I certainly enjoyed a couple of days off!”

Senior Kate Schembri agreed, “Unlike many, I actually had a pleasant two days off from school.” She explained, “My house never lost power so I got to catch up on some homework and snuggle up on the couch.” She continued, “After a stressful fall, it was a much-needed break, and I most definitely lucked out with my situation though I feel for everyone who had to deal with the complications from the storm.”