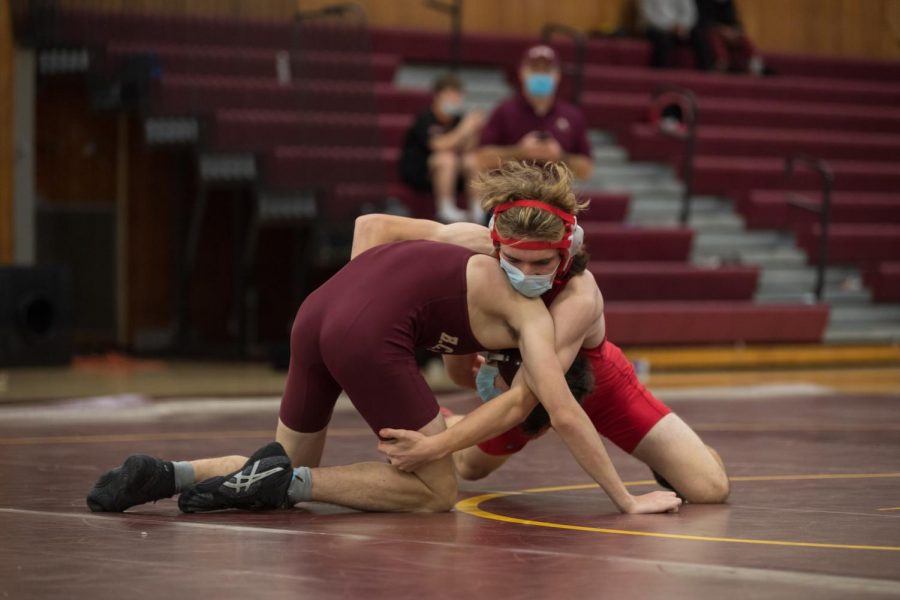 Danny Phillips in his first ever varsity match.

The wrestling team kicked off the season last week with wins in a Wednesday night duel in Pembroke and a quad last Saturday in Weymouth, against BC High and Weymouth. For the first time since the pandemic hit, the team has returned to normal competition, with the only noticeable effect of Covid-19 being the use of masks.

On Wednesday, the team won the season opener 54-10, with wins from almost everyone. Yet, it was two of the losses that were the best matches of the night. Senior Sam Marwill, after not wrestling last year, pushed an extremely challenging opponent to the brink in his match. Additionally, captain Jasper Henly dropped down a ton of weight last second to wrestle one of the top 5 kids in the state, really doing everything he could for the team. When asked about the match, Jasper said  “It was a good start to the season following that win to Pembroke. Although a majority of our varsity lineup had graduated, a lot of the new and returning kids, including myself and the other captains, wrestled our hearts out that night. Even though we’ve only been practicing for a couple weeks now and just had our first meet, I believe that each and everyone of the kids on the team this year are here to prove something and cheer each other on.”

The team took this momentum and rolled into Weymouth on Saturday to face off against Weymouth, Stoughton, and BC High. The Harbormen dominated, beating Weymouth 32-6, Stoughton 42-0, and BC High 70-0. It was kind of bittersweet though, as both Weymouth and Stoughton, although they still had good kids, were extremely depleted because of the pandemic and couldn’t fill out a lineup. Despite this unfortunate reminder about the effects of the pandemic on the sport, senior captain Kyle Gidman stated  it was “a great way to kick off the season. This year has a lot of potential and it was the perfect way to start off.” Notable wrestler in this meet was sophomore Danny Phillips, who because of one of the varsity starters being out stepped up to the plate and won his first ever varsity match in a 1 point thriller.

Looking forward, the team has an absolute barn burner coming up against Franklin, Sharon, and Norton this Thursday, who are some of the better teams in the state. This year the Harbormen look poised to be able to beat any of these teams. Senior captain Quinn Fleeming noted his praise for the team as “A lot of really good wrestlers graduated last year and the team this year relies heavily on our seniors. However, many of our new recruits looked very good Wednesday and I’m looking forward to and am confident in the future of the program.”