Why “Happy Nation” is so brilliant 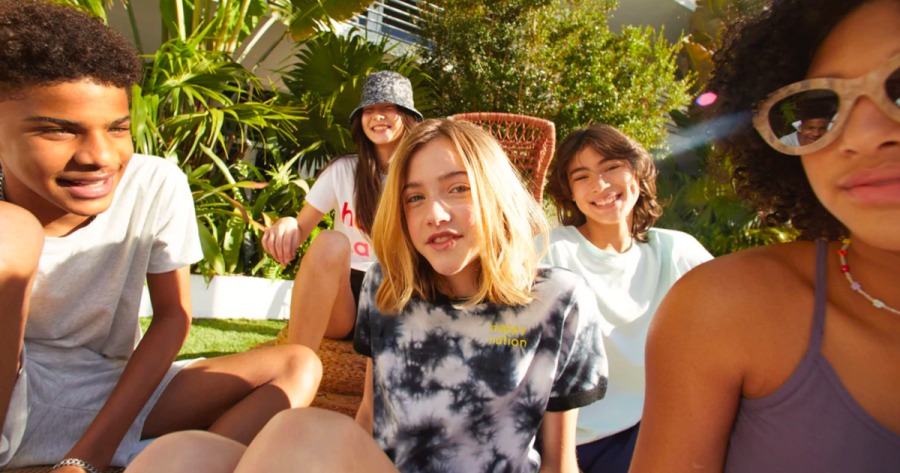 Happy Nation is Victoria’s Secret’s newest, all-inclusive underwear company for tweens (ages 8-13). Victoria’s Secret holds many identities in the minds of consumers, both good and bad. Happy Nation seems to be a step in the right direction for the brand for many reasons. This is the first time Victoria’s Secret has introduced lines for men, and this new line of tween undergarments is meant to include all genders and identities. This is not just a philanthropic move on Victoria’s Secret’s part but an expert marketing tactic to repair their brand image as they move away from a standard model body type and advertisements that reflect women’s bodies of all shapes and sizes more accurately. From a business standpoint, Victoria’s Secret can also expect to see consistent sales, assuming Happy Nation is all it’s chalked up to be.
For the first time in VS history, the company is offering products for men and tailoring its line to accommodate all genders. In a 2018 interview with Vogue, chief marketing officer Ed Razek put out a very alarming statement regarding transgender models in the Victoria’s Secret Fashion Show. In response to whether or not transgender models should appear in the show, Vogue quoted Ed as saying,” No. No, I don’t think we should”. When asked why not, he responded with,” Because the show is a fantasy,” implying that transgender women cannot effectively fulfill the dream of the VS Show. For Victoria’s Secret, a company with a controversial past, including all gender identities, seems like a step in the right direction. Not only is Victoria’s Secret providing for underserved gender identities, but it is now serving the male gender, which they never had previously. This new inclusion of men is stirring up some controversy. Victoria’s Secret has always been a woman’s company, and some female consumers wish it would stay that way. However, it’s essential to consider the demographic is 8-13. Everyone, regardless of gender, can empathize with the awkwardness of the teenage years. It is interesting to see if Happy Nation can help young men feel more secure in themselves, the same way Victoria’s Secret has for some young women.
Although it is nice to think that Victoria’s Secret is becoming more inclusive simply out of goodwill, it’s more than likely that this is their attempt at repairing its sullied image. Victoria’s Secret has not just had problems with gender. They are notorious for promoting an unobtainable body type, discrimination of gender, and all sorts of other head-turning scandals. So will this venture with Happy Nation repair their image? I don’t think so, at least not entirely. Victoria’s Secret’s brand image before the last few years was unforgettable. Gorgeous models with thin bodies and a “fantasy” only obtainable by a few. Victoria’s Secret is a company that every woman is familiar with, and most have a story or two about their first time in a store. All the rebranding in the world can’t erase whom VS used to be, but I almost don’t want it to. Victoria’s Secret was a confident and risque brand regardless of all the bad. I didn’t look like the models, but their apparel made me feel good. Junior Audrey Nolan recalls that as a teen,” Going to Victoria’s Secret was like a coming of age experience.” As VS moves toward a more body-positive movement, I hope they maintain the sexiness that proved integral to their brand image. It’s a common trope of brands to move toward body positivity but simultaneously unsexing their campaign because of it. I hope that Victoria’s Secret does not fall into the same trope.
Happy Nation is brilliant on Victoria’s Secret’s part as a business decision. Not only is it changing their brand image, but hooking customers in their preteen age ensures Victoria’s Secret their loyalty for the rest of their life. Junior Erin Packard claims,” I’ve worn Patagonia since elementary school, and I still wear it now.” Not only is Victoria’s Secret claiming a consistent customer base, but this is a way to ease parents into Victoria’s Secret brand. If I had a penny for every time, my mom expressed discomfort with me going to Victoria’s Secret as a young girl, I’d be rich. This sentiment holds amongst most parents who find their young tween shopping at Victoria’s Secret inappropriate. Happy Nation is an underwear brand, not a lingerie brand like Victoria’s Secret. In the past, Pink has been Victoria’s Secret’s buffer company for young girls (since its demographic is 13-22), but their demographic is still too high to include younger girls who also need bras and underwear. Happy Nation garners trust for the VS brand amongst both tweens and their parents.
Overall, Happy Nation is an exciting prospect for Victoria’s Secret. It has the potential to repair their tarnished image and improve gender visibility in the underwear market. Nearly no other companies with the same products and services target this niche demographic. Happy Nation is a significant interruption to the world of lingerie and undergarments, and I fondly anticipate their success.