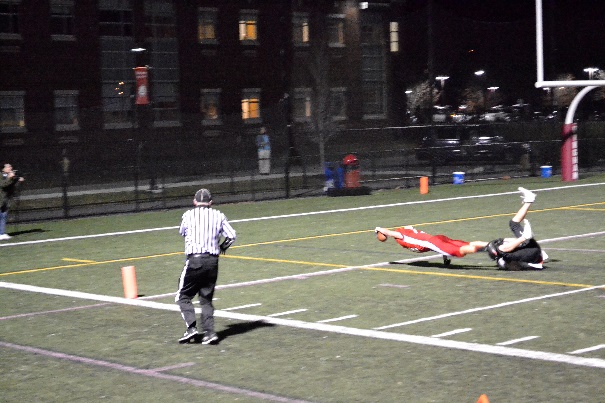 A quick tackle is not enough to prevent this player from completing a successful touchdown.

HINGHAM HIGH SCHOOL – The Hingham Harborman football team defeated their North Quincy High rivals in an astounding 33-0 shutout Friday night. The boys scored touchdowns in every quarter, and gave all in attendance a wonderful game to commemorate the last home game of the season.
North Quincy’s offense gave the team a run for their money, however with every turnover Hingham fought back tenfold. With every point scored, the Harbormen’s kickers consistently added on extra points.

While the football team executed a flawless game, other students were contributing to the celebratory air of the night. The Hingham Dance Team entertained the fans in the stands as they performed a rousing dance routine. Their performance was much appreciated and received a great round of applause from the onlookers.

In keeping form with the other home games of the football season, a club from the High School fed and ran the concession stand for the hungry fans at Friday’s game. The 2015-16 HHS Hammerhead Robotics Team manned the snack bar with robotic precision. Students worked the grill and sold Crow Point Pizzeria calzone and pizza, along with soda, drinks, candy and snacks. All totaled, the team rose over 600 dollars in fundraising for supplies and tools for their season, which starts up in January.In true Hingham fashion, Friday night’s game was great fun for all who attended, and a great show of the football team’s hard work and practice. Good job, boys!