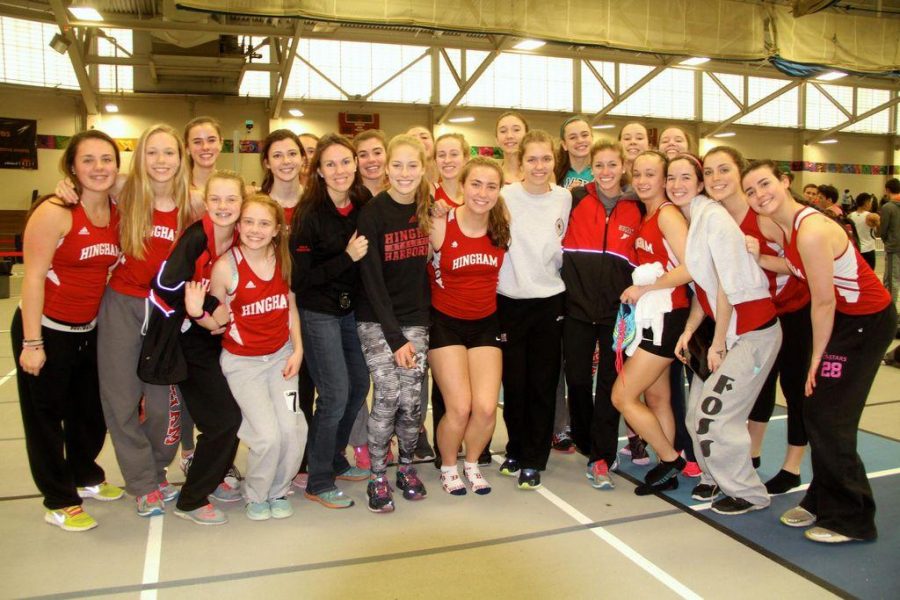 Photo Courtesy of The Patriot Ledger

Members of the Hingham High indoor track and field pose after winning the Division 3 State relay championship at the Reggie Lewis Center in Boston on January 17, 2016.

The Reggie Lewis Center has always been the place Hingham and most other South Shore high schools call home for winter track. It has been so for the last 20 years, prior to, there was no place for high schoolers to compete during the cold winter months for almost four decades. The Reggie Lewis Track and Athletic Center (RLTAC) has had an enormous positive influence, not only on the athletes, but the sport also.

For anybody who has attended an average indoor Reggie Lewis Track Meet, he or she can attest to the adrenaline filled atmosphere with a circus of events going on at the same time. The track is constructed in a way to allow multiple events to go simultaneously. Inside the arena are two shot put areas, a raised two-hundred meter track at a slight incline, and a short stretch of space in the infield for sprinters. Along the perimeter of the track, many spectators can enjoy the high-rise seats perfect for watching some extraordinary running.

To have such a communal place where all the high school athletes can compete together heightens the competition, but it also allows for more camaraderie. Senior runner Renee Noordzij can attest that “there is an air of companionship on the track you just can’t get from dual meets, for example right before a race I always appreciate when competitors tell me good luck and the constant stream of cheers not only from fellow teammates, but from competing teams as well.” The impact has left many runners and spectators with unforgettable memories, and in it, accomplishments that were once thought impossible.

Nothing is comparable to the exhilarating experience of competing with such a huge crowd of people all gathered in one place for running. Even the famous “Reggie Cough” athletes sometimes get after racing has contributed to an impact in itself. Not to mention the excellent staff at the RLTAC that keeps the arena in excellent condition and somehow manages to get all the track events finished in a strict time limit of under three hours. It is quite amazing.

Runners are often very passionate about the sport itself. Every track workout, long run, and race influences runners in some way. When runners step up to the starting line to begin, fellow competitors around them are feeling the same way: nervous, excited, and ambitious. It is this emotional bonding that really allows athletes to connect with one another. In that moment, we are all runners running on the same track at the same time for the same amount of distance. It is essential to we keep this connection between athletes strong not just because it shows good camaraderie, but because it can lead to so many amazing experiences and memories that athletes might never have a chance to experience.