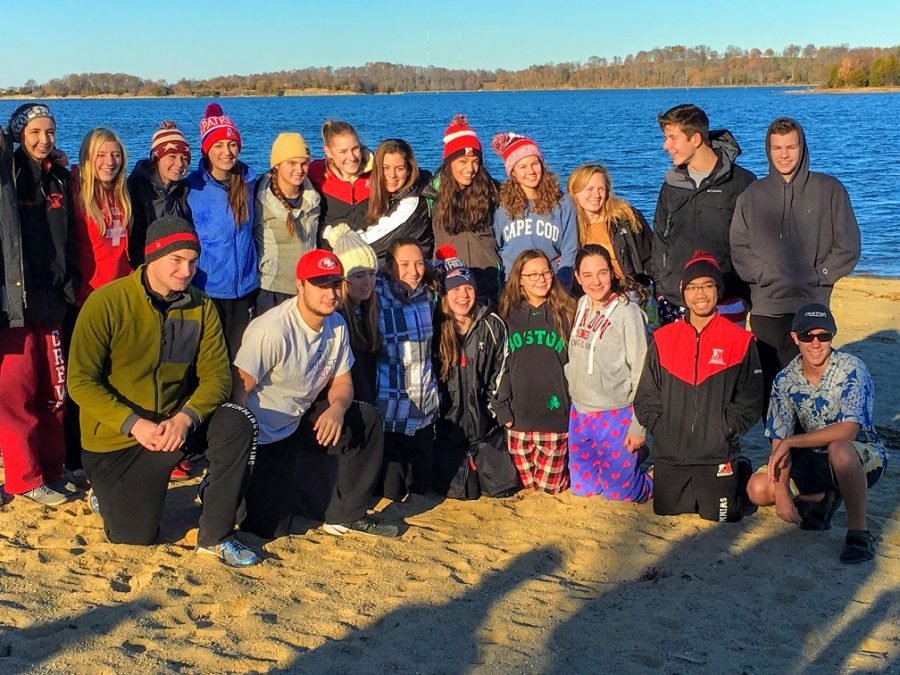 The Boys and Girls Swim Team takes a group photo before they run into the water.

Thirty Hingham High School students jumped into the ocean at the Hingham Bathing Beach under a blue sky. But it wasn’t summer. It was last Sunday, and the occasion was the Swim and Dive Team’s annual Polar Plunge. The Polar Plunge is the biggest fundraiser for the Swim Team, whose members brave the frigid water in exchange for pledges to support the swimming and diving program.

Swimmers arrived at 2 p.m. at the Bathing Beach wearing many layers. A tent was provided for them to put their towels and changes of clothes and to dry off after they ran into the ocean.

A nice and popular addition to the festivities was a fire pit, where people gathered to warm up.  The swimmers got into their bathing suits in the tent and lined up behind a streamer held by two parents.

“Three … two … one … Go!” Spectators counted down and participants broke through the streamer and ran toward the frigid water, which was 46 degrees. The air temperature was 42.

The swimmers dove in, and then quickly made their way out. A few members of the team challenged each other to see who could stay in the longest. “My goal was to stay in for one minute,” said swimmer/diver Jackson Carroll. But the water was so cold that no one was able to stay in for more than 10 seconds.

Swimmers who had done the Polar Plunge before said that this year the water was warmer. “It really wasn’t that bad” said Justin Moczynski.

The team members dried off and changed back into their warm clothing before celebrating their accomplishment. There was a large assortment of sweets provided, including munchkins, cookies, cupcakes, hot chocolate, and coffee.

Also celebrated by the team was girls’ captain Sarah Smith, who celebrated her 18th birthday. “I’m very relieved it’s over,” she said.