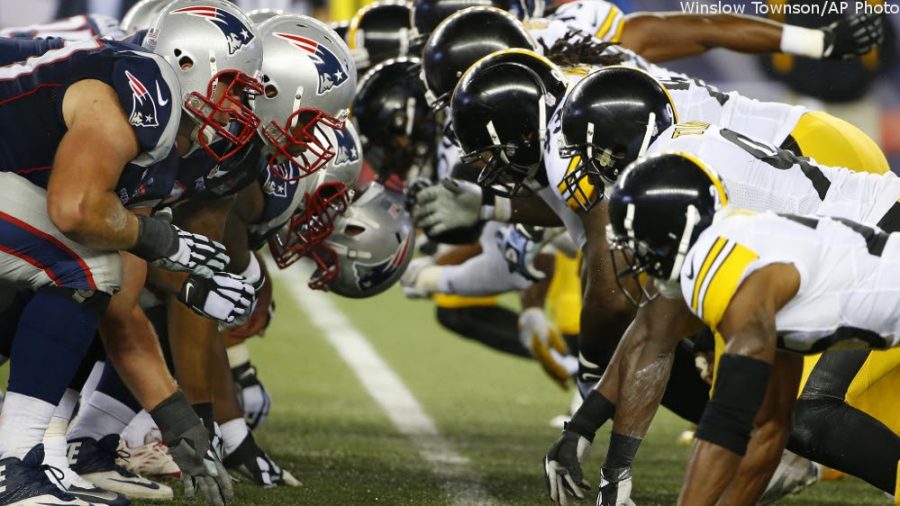 The Patriots facing the Steelers in the AFC championship game.

On Sunday, January 22, the Patriots beat the Steelers in the AFC championship game, securing their place in what will be their ninth Super Bowl game. The New England Patriots and Atlanta Falcons will face each other in Houston on February 4, with all local fans hoping for the team’s fifth Super Bowl win.

Throughout the AFC match, quarterback Tom Brady (#12) threw two of his touchdown passes to wide receiver Chris Hogan (#15), who caught nine passes for 180 yards, and wide receiver Julian Edelman (#11), who caught eight passes for 118 yards. However, the Steelers lost their top running back, Le‘Veon Bell (#26), due to a groin injury he endured during first quarter.

In the first quarter, the Patriots began the game with a field goal from Patriot’s place kicker, Stephen Gostkowski (#3). With a 31-yard field goal, Patriots led the Steelers 3-0 with 13:12 remaining. The New England Patriots ended the first quarter with a 10-0 lead over the Pittsburgh Steelers  after quarterback Tom Brady made a 16-yard touchdown pass to wide receiver Chris Hogan (#15) with 2:47 remaining.

In the second quarter, because of Steeler’s Le ‘Veon Bell’s (#26) injury, the Pittsburgh Steelers substituted D’Angelo Williams (#34) in his place. The running back scored a touchdown from five yards out and brought the score to 10-6 with 11:31 remaining. Towards the end of the quarter, the score was 17-9 Patriots. The New England Patriots used a trick up their sleeve to score their second touchdown of the match. The “flea flicker” play resulted in quarterback Tom Brady (#12) passing a 34-yard touchdown pass to wide receiver, Chris Hogan (#15), with 7:48 remaining. Freshman, Isabella Mac Naughton, claims that “the flea flicker move that the Patriots did was amazing and [I] had to rewatch like ten times to understand the play.”

In the third quarter, the Patriots upped their lead over the Steelers to 20-9 after a 47-yard field goal made by Steven Gostkowski (#3) with 9:59 remaining. Towards the end of the quarter, however, it was clear that the Patriots would win the AFC championship after New England’s lead grew to 33-9. Quarterback Tom Brady (#12) threw his third touchdown pass to wide receiver Julian Edelman (#11), with 1:39 remaining. New England fans’ excitement exploded with the 24 point lead, and a little help from singer Jon Bon Jovi who led the stadium in a sing-a-long of the song “Livin’ on a Prayer,” suggesting the Steeler’s chances of winning were slim.

During the fourth quarter, Stephen Gostkowski (#3), made a 26-yard field goal, upping the score to 36-9. With 3:36 minutes remaining in the game, the Steelers’ quarterback, Ben Roethlisberger (#7) made a touchdown pass to Cobi Hamilton (#83), partially filling the gap to 36-17., but ultimately everyone knows the Patriots won the game with a 19 point lead.

Who will win? The New England Patriots or the Atlanta Falcons? Obviously, most HHS fans are rooting for the Pats.  Whatever happens, it is nice we can watch the game over a “no homework” weekend.