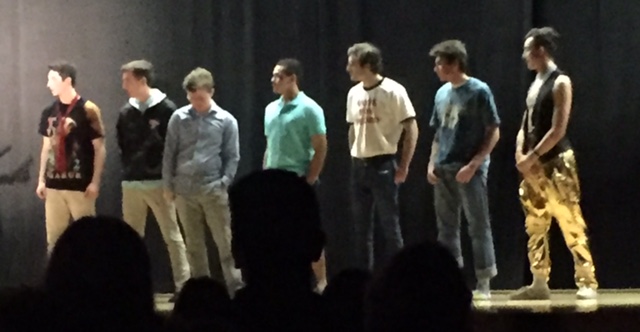 On the evening of Thursday, April 6th, Hingham students and faculty gathered together in the auditorium for the annual pageant, Mr. HHS, which is a competition for senior boys and an opportunity to show off their capabilities in a range of acts. Before the show began, the excitement in the room was intense. Junior Bella Chiparri said, “I had tears in my eyes from laughing so hard”.

Junior Oliver Dupee was, “expecting the greatest showdown of all time. Cutthroat competition”. And the show definitely delivered it With a bang, the contestants all strutted in style. A total of seven: Dylan Lindsay, Al Ferrara, Jack Muldoon, Josh Brown, Scott Myers, Max Giarrusso, and John Mills. Sadly, one of the contestants, Jack Metzger was home sick, but wished his contestants luck.

The first event was formal wear. Jack Muldoon displayed a nice salmon coat and white jacket. Al sported a nice bow tie with some spectacular dance moves. Scott donned a traditional suit with sunglasses. Dylan played off of his romanticism and gave senior Teresa Bandera his one red rose. Josh played off his sporty look with Superstitious, and Max took great strides on stage and then walked right off. John carried a cane demonstrating his superior ability.

The second category featured beach wear. Al showed off his Hawaiian outfit with a weight and beach ball. Muldoon embraced his mermaid nature, and Josh played it safe with his traditional towel and cap. Scott brought out a chair to amuse the audience and laid down for a bit. Max glided across the stage for his entrance, while Dylan dressed as a lifeguard and John surfed through the crowd.

Quickly segwaying into the third part of the competition, the contestants demonstrated their talent. Al interacted with the audience using his card skills to impress Senior Caroline Roddy, but had difficulty competing with Scott’s impersonations. Josh swept the crowd with his smile poem, but Dylan wowed with his dance moves. John blinded the audience with his flashing gold pants.  Ending on a high note, Aidan Leonard joined Jack to sing a duo about dreams, but halfway through Jack was abandoned to sing a solo on his own.

The rounds stacked up with questions and hand raising along with hilarious answers and outrageous responses. People in the audience could not help cheering and creating a storm of laughter. As part of the competition, the competitors called up teachers for appreciation and, out of thin air, gave them red roses. Claps and appraisal followed and the audience could not have been more infatuated.

It was a close call as to who should be crowned Mr. HHS, but the crowd could not be pleased with all seven contestants. Only one would win. To the audience’s content, Dylan Lindsay won Mr. HHS 2017. Junior Michael Hill said, “good choice, nailed it on every category.”