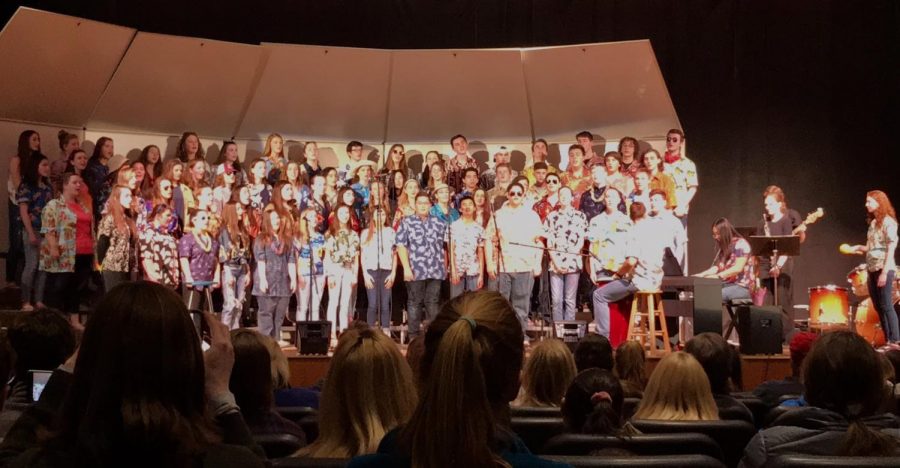 Both choruses join to perform "Can You Feel the Love Tonight?" from The Lion King.

Walt Disney once said, “You can design and create, and build the most wonderful place in the world. But it takes people to make the dream a reality.”

A Disney phenomenon hit Hingham High School on this past Monday, the 18th, when Hingham High School hosted its annual Talent Expo for the thirteenth time. This year’s theme was Disney, featuring songs from the favored old classics like Cinderella and The Lion King, as well as some of the newer movies like Moana and the live action Beauty and the Beast movie.

The director of this show is Dr. Joseph Young, the chorus teacher at Hingham High. He said in an interview, “Talent Expo is a music concert that celebrates the individual talents of our chorus students and students throughout the school. We go through an informal rotation of themes based on significant historical foundations of popular music. I don’t look for anything in special acts because I’m only one of the people who judge them, the other students audition for each other, and they are the ones who pick. I do encourage that when they vote for the other special acts, that they are entertaining and also high musical value. So they shouldn’t be just entertaining but be good music too.”

“[My favorite disney song is] ‘Feed the Birds’ from Mary Poppins, ‘When You Wish Upon A Star’ is a close second,” Dr. Young continued. “The really beautiful thing about Talent Expo, one of the really great things, aside from the chorus numbers, the students really put everything together. They pick the music, and they prepare it. I give them no help at all, so everything they see on the stage has not been prepared by me, it’s just been the students themselves. They’ve done it entirely on their own, I think it’s a great lesson for all of us. If we leave students to figure things out on their own, they’ll come up with some really great moments.”

This year’s Talent Expo was dedicated to the memory of Gary L. White, Dr. Joseph Young’s music teacher who inspired Dr. Young to run the Talent Expo at Hingham High. Mr. White created Talent Expo to showcase individual talent and the creativity of chorus students, which Dr. Young has done with his shows as well.

The performance on Monday included over fifteen songs, including special acts by chorus classes during the school day. The first performance of the show was from the Chamber Singers, a group that meets every Tuesday night after school.

Nathan Lavoie, a freshman at Hingham High School and a bass in Chamber Singers, shared, “For my first Talent Expo, it was one I will never forget. It was without a doubt the most fun chorus concert ever.”

“Being apart of chorus is so special and amazing and talent expo shows that through the performances of our chorus family. In chambers Dr. Young chose ‘Supercalifragilisticexpialidocious’ because he knew our group is so talented enough to do it and it was the perfect song for us because it brought out our love for singing. Supercalifragilisticexpialidocious also had singing and line solos and I was one of the few people in chamber singers to have one and it brought out the people in chambers love for singing as well. I prepared for the performance by practicing for Supercalifragilisticexpialidocious at Chambers Singers rehearsal every tuesday night and at home to make sure I knew my part for the song really well. My all time favorite Disney song without a doubt is ‘Beauty and the Beast’ from Beauty and the Beast!”

Following up after Chamber Singers’ amazing performance were a few special acts. One of the comically entertaining songs performed was ‘Your Welcome’ from the film Moana, sung by Andre Lavoie. Andre Lavoie is a senior and a bass in both Mixed Chorus and Choral Spectrum.

Andre Lavoie said, “Having a special act is such a fun experience to express a unique talent that you can’t show in a regular classical choral way, sometimes stepping out into modern music is always a thrilling experience. I picked my song based off of what captured the theme the best and never failed to entertain and include the audience at the same time. I prepared by meeting with the band members once every couple of weeks to refresh the song and make sure we still have it down very well, consistency is always key. Honestly there’s such a wide variety of Disney songs it’s really hard to choose, but one I always love hearing is ‘A Whole New World’ from Aladdin.”

Another performance was by Concert Chorale. Concert Chorale is a class that meets first thing in the morning, with both freshman and sophomore students. Concert Chorale sang the classical Disney song ‘A Dream Is A Wish Your Heart Makes’ from Cinderella, featuring a solo from freshman Colleen Keohane.

Colleen Keohane later commented, “I thought the Talent Expo was so much fun. Everyone was so supportive and was cheering everyone on. there was such a supportive atmosphere, it was great. I really enjoyed hearing other people sing that I don’t often get to hear. I thought our song was pretty good. My solo was fine but everyone is their own worst critic. Everyone else’s singing was so great! My favorite all time Disney song is easily ‘I Can Go The Distance’ from Hercules.”

Disney was such a wonderful theme and the fact that all students knew and could sing the songs made the concert even better. Talent Expo is an amazing show that lets students take center stage and sing their hearts out. It puts a smile on everyone’s faces. This year’s Talent Expo was fantastic and featured stellar performances that touched everyone’s hearts. But remember, Disney is not only for the kids. As Walt Disney once said, “You’re dead if you aim only for kids. Adults are only kids grown up, anyway.”