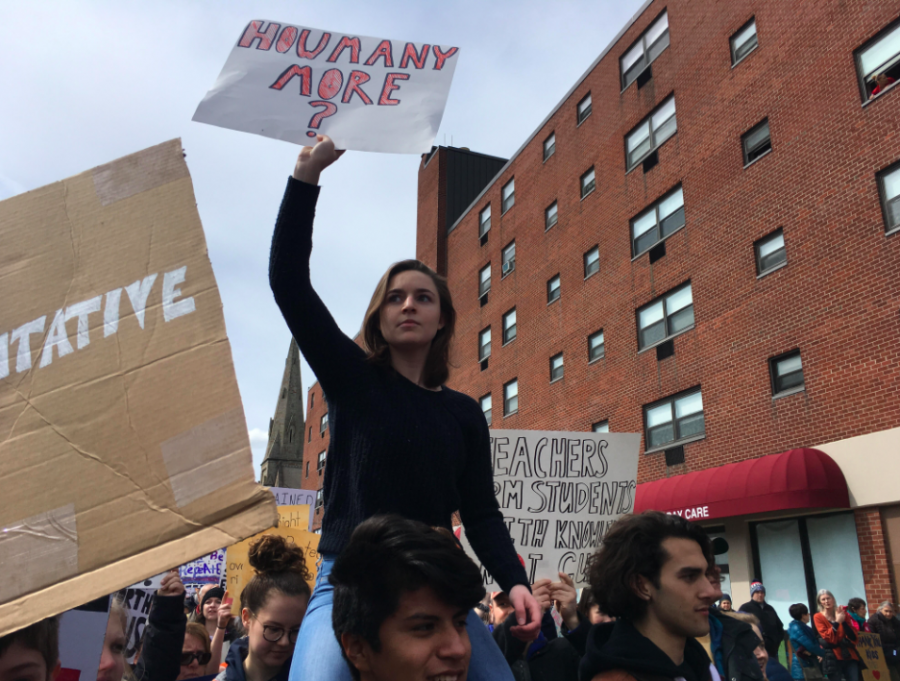 Hingham High Senior Lauren Mitchell during the March for Our Lives this past Saturday.

On Saturday, March 24th, an estimated 50,000 people marched to and rallied at the Boston Common for the March For Our Lives, an event calling for tighter gun control on a Congressional level. Parallel March For Our Lives events occurred in every major city in the United States, from Providence, Rhode Island, to Jackson, Mississippi, and San Diego, California. The movement even carried across the ocean to cities including Paris, Mallorca, and Berlin.

In Washington D.C, the March For Our Lives, which included speeches from student activists who helped to organize the event as well as celebrity performances by Lin Manuel Miranda, Ben Pratt, and Miley Cyrus, possessed the highest number of protestors to date in D.C. at a staggering 800,000 participants. The number counts 200,000 higher than the amount of protesters who marched on Washington in 1969 to protest the Vietnam War (USA Today), making Saturday truly a day for the history books.

In Boston, the events began Saturday morning at Madison Park High School in West Roxbury at 11am, where protesters began to march down Columbus Avenue. The march brought thousands of people of all ages. There were toddlers holding onto their mothers’ arms, countless elementary, middle, high school, and college students, mothers wearing red “Moms Demand Action” t-shirts, and dads and grandparents who all postured signs that featured statements of protest such as “Schools are for Learning, Not Lockdowns” or “A Fish Needs a Bike As Much As You Need An AR-15.”

Spectators watching from the sides of Columbus Avenue cheered on the marchers with balloons and signs of their own. In the windows and balconies of residential buildings lining the street, people stuck their heads out and gave thumbs ups, waved, or recorded the march on their phones. In response, the marchers cheered.

Chants of “hey hey, ho ho, the NRA has got to go!” and “show me what democracy looks like!” followed by the response of “this is what democracy looks like!” echoed in the streets. The ever-present energy of activism, unity, but also concentration on the cause rushed through the veins of participators. Senior Justin Hull explained, “I think the sound [of the cheers] reverberates off the buildings and it’s just this insane energy you can’t really feel anywhere else. There is so much solidarity.”

The thousands arrived at the Boston Common around 1:30pm. The rally, which included powerful speakers such as Leonor Munoz, a student at Marjory Stoneman Douglas High School, and her sister Beca Munoz as well as multiple others, took place from between 2-5pm. Besides listening attentively and cheering for the speeches, participants also sung, danced, laughed, and cried with others around them when music played during the breaks in between speakers. Massachusetts Senator Elizabeth Warren and U.S. Representative Joe Kennedy III both shook hands and spoke with those gathered during the march and at the Common.

Every participant possessed his or her own reason for marching that morning. Senior Lauren Mitchell said that she was “marching in solidarity with the victims of Parkland, victims of mass shootings in the past decades, and victims of gun violence in under-represented communities.” Others declared they marched for their younger siblings’ and future children’s safety or for family members they lost to gun violence. Despite the range of backgrounds gathered on the Common, all desired that their actions spark one thing: change.

Junior Abby Fennelly expressed that she thinks the march in Boston as well as the marches across the nation “will show Congress that we are not going to stand for representatives who serve organizations instead of their constituents.”

The creators of Never Again and the March For Our Lives had one concrete goal when they started the movement a day after the shooting that left 17 dead in Parkland, Florida: to never again face the atrocities of a mass shooting. Since then, the cause has spread to promote the prevention of gun violence as a whole through Congressional action, even though the leaders of Never Again do not yet possess the right to vote.

With more than a total of one million protesters estimated to have marched on Saturday, the event ultimately proved to American politicians that passivity towards gun violence is a thing of the past. Now, Americans of all ages will raise their voices, signs, and votes until their demands are made policies.