Inside the Lockdown: Student Voices 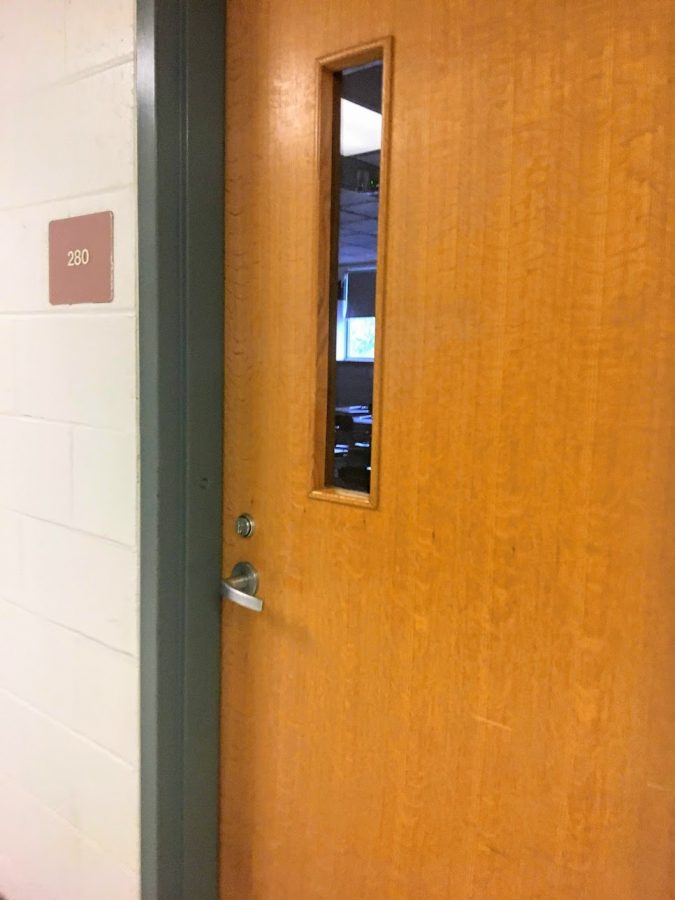 During lockdown procedure, classes must lock doors, turn off lights, and students must shelter in place or in the far corner of the room.

Freshman Kaylin Ryan arrived at Hingham High School on Monday morning having just returned from getting her braces removed. Her car pulled into the parking lot at around 9:30 AM, and she excitedly prepared to enter her B block class and tell all of her friends about her good news. But as she got out of her car, she noticed her phone blowing up with texts from her friends. And they were not about Kaylin’s braces.

What Ryan had missed was an announcement over the loudspeaker at around 9:15 AM instructing all classes to conduct a “lock in place.”. Since the semester had started just a few weeks ago, students assumed this to be a routine lockdown drill. However, as the bell indicating the end of B period was stalled, students began worry.

At approximately 10:03 A.M., just one minute after the bell for the next period was scheduled to ring, Principal Swanson sent an email to the entire school community to inform the community on situation. The email read,

“I am writing to let you know that Hingham High School is currently in a lockdown. After we received a phone call about an alleged threat, we immediately contacted local police and placed the school in a lockdown. Police are at the school now and we are convinced that everybody is safe. We expect the lockdown to end soon, at which point the school day will resume. I will share additional details as soon as possible.”

After receiving this update, a number of concerned parents began texting students to share the information and check that they were safe. Upon finding out the reality of the situation, some classes went into full lockdown mode, turning off all lights and hiding in the indicated classroom corner. Other classes who were not informed of the situation continued to use class time to complete work, which is done during a shelter-in-place.

Midway through the lockdown, students on the top floor in the building observed news helicopters flying above the school, suggesting the severity of the situation. Others on the first floor heard the SWAT teams and police officers in the hallways. Junior Adeline Van Buskirk, who was in her study hall on the first floor at the time of the lockdown, recalls, “we could see some of the police officers outside. We also heard them slamming the lockers outside of the classroom, which was really alarming.”

Just after 11:00 A.M., Principal Swanson came over the loudspeaker to announce that the lockdown would conclude at the next transition bell and students should report to their E period classes. Swanson clarified that the lockdown was brought on just after he received a phone call reporting an alleged threat to Hingham High School at 9:04 A.M. He ensured students and faculty that police had conducted an investigation and had searched the entire school, coming to believe that there was no real threat to the school in the first place. This was all the information shared at the time.

At 12:04 P.M., Swanson sent the following update to the HHS community,

“Shortly after 9 AM today, I received a phone call from a person who suggested the existence of a threat against Hingham High School. All classrooms immediately “sheltered in place” while members of our local police investigated the details of the alleged threat.  Police officers then conducted a thorough search and interviewed the appropriate people. We were able to ensure the safety of our building and end the lockdown at approximately 11 AM. We are convinced that the safety of our students was never actually in jeopardy today, but we are grateful for the support of local police in helping us to address this situation.  We regret the stress and worry that was generated by what we now believe was nothing more than a hoax. If there is a silver lining to this, it lies with the swift and effective response from all parties (police, school administrators, teachers, students and parents alike) who, together, helped to maintain order and properly execute our safety plans. We can all take some comfort from the competence and teamwork displayed by law enforcement and our own school community.”

Throughout the next few days, Hingham police conducted a thorough investigation that proved the call to be a hoax. The police reported that the anonymous caller, who has yet to be identified, suggested that a student in the building was carrying a weapon. Principal Swanson immediately called police and ordered all classes to “lock in place.” The police interviewed and searched the student reported by the caller to allegedly be carrying a weapon, finding that the student had no relation to the incident and posed not threat to the school. Following the interview with the student, police conducted a search of all lockers in the building to search for weapons or any threat to the school. After an hour-and-a-half search, the lockdown was lifted.

Although Principal Swanson and the Hingham Police conveniently conducted the investigation in just an hour-and-a-half, most all students agree that communication could have been improved. Swanson’s announcement to “lock in place” was perceived differently by some classes due to what Swanson blamed on his own poor wording; “lock in place” indicated a full lockdown to some teachers and a shelter-in-place to others. Swanson had intended a shelter-in-place, which calls for teachers to lock their doors but continue teaching.

Junior Riley Potter, who was in her ceramics class when the lockdown began, reported, “We didn’t even lock the door at first since we thought it was a drill, but once the bell didn’t ring for the next block, we locked the doors because we figured out it was real.” Other classes misunderstood the announcement to be an order to enter full lockdown procedure and took shelter in the corners of the classrooms.

At Friday morning’s Student Council meeting, members had the opportunity to reflect on what they thought could have been improved in the lockdown, most agreeing on communication to be a weakness of the incident. Senior Elizabeth Hennessey shared, “We shouldn’t have found out through Twitter.” Many members agreed, as most were unsure of the seriousness of the situation before finding out through parents or the Hingham Police Department’s Twitter page.

Some members mentioned that they were unaware of the situation throughout the entire lockdown. Sophomore PJ Harrington shared, “I didn’t receive my mom’s texts about the lockdown because my teacher was still teaching a lesson.”

Though confirmed a hoax, the lockdown on Monday frightened many students, as school violence and threats are an unfortunate reality today. Freshman Kaylin Ryan, who worried about her friends while unable to return to school, reflected, “I was updated by my friends the whole time, and calmed down knowing everyone was safe. With all the school shootings happening and it being my assumption that that had been the threat, I could only pray that our school wouldn’t be the next one on the news.”

After the bell rang following the hour-and-a-half long investigation, the day resumed at HHS, yet the lockdown remained a popular topic of discussion throughout the rest of the school day and week. Many students began to question the possibility of the event as well as the legitimacy of the threat. On the weekly Friday Show broadcast during homeroom, Principal Swanson addressed the student body, stating that he was grateful the threats were just a hoax, and he was proud of the police officers and administration who handled the situation. He also included that he believes that there were many misunderstandings when he called for classes to “lock in place,” yet believes that this lockdown was a good learning experience for all.