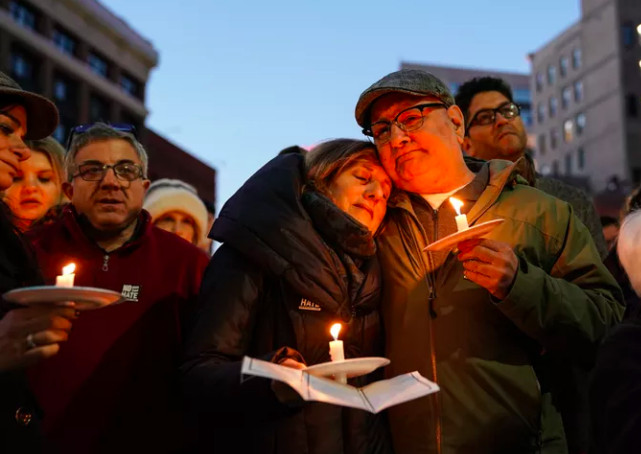 On Saturday, October 27th, at 9:54am, the Tree of Life Synagogue in Pittsburgh, Pennsylvania, was attacked by a man who entered the temple yelling “all Jews must die.” He was armed with an AR-15 and handguns, according to Pittsburgh CBS. Eleven were killed and six more were injured, making this the deadliest attack on Jewish people in the history of the United States.

Just a few hours after the attack, at Congregation Sha’aray Shalom in Hingham, a police officer stood outside during a Bar Mitzvah service to ease anxiety of those attending the Jewish ceremony. That night vigils were held across the country. People mourned the lives lost and the message this attack presented.

The suspect Robert Bowes pleaded not guilty of the forty-four charges against him, several of which could entail the death penalty, according to the BBC. Bowers was an active user of Gab, an alt-right social media page onto which he posted anti-Semitic speech. After the tragedy, Congress and the public questioned section 230 of the Communications Decency Act from 1996 that does not hold mainstream social media sites accountable for the content users post, according to The Washington Post.

President Trump responded to media interviewers in a video posted on CNN, saying, “If they had some sort of protection inside the temple, maybe it could have been a very much different situation… I think one thing we should do is we should stiffen up our laws in terms of the death penalty. When people do this they…deserve the ultimate price.”

Seniors Rachel Ader and Emma Khan are the founders of Jewish Club at HHS. Rachel Ader said that moving forward, “I would like to see monitoring hate speech on social media.” Emma and Rachel both responded negatively to President Trump’s suggestions because, in their opinions, “armed guards make everyone more nervous.”

In terms of Jewish Club, Emma spoke, “Our goal is to just educate people on the culture; we’re not trying to convert anyone. We want people to openly explore a culture that is different from theirs. It’s also another place that we can talk about the event that just happened.” They hope to do so through baking nights, movies, speakers and monthly meetings.

The mourning for those affected by the shooting and trial for Robert Bowers will continue this week.