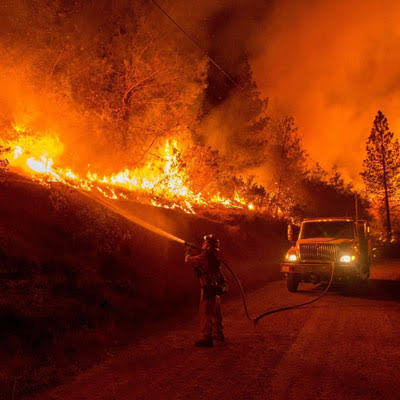 The Woolsey Fire and Camp Fire in California have left hundreds of thousands homeless and at least 63 dead. Photo via California Community Fund.

Record-breaking fires continue to scorch much of California, displacing over 250,000 people and polluting the air all across the state. The two larger fires, the Woolsey Fire in Southern California and the Camp Fire in Northern California, have charred hundreds of thousands of acres of land and left residents without homes.

The Woolsey fire in Southern California broke out on Thursday, November 8. The fire began in the cities of Malibu and Calabasas, later extending to Thousand Oaks, California, where a gunman killed 12 people on November 7. Nearly all residents of Thousand Oaks were ordered to evacuate their homes just a day after tragedy struck the city.

Burning in premier residential areas, the Woolsey fire put many celebrities in the national spotlight as they lost their multi-million dollar homes. Miley Cyrus, Robin Thicke, Neil Young, and a number of other celebrities lost their Malibu or Calabasas homes to the wildfires. Some celebrities received criticism for their efforts to protect their homes, including the Kim Kardashian and Kanye West, who hired a team of private firefighters to prevent the fire from reaching their Calabasas home. The involvement of celebrities in the Woolsey Fire promoted this fire to the top stories on a number of news networks. However, sophomore Lindsay O’Neil comments, “I’d rather hear about the millions of people who have died and are missing and by the fire in north than the few celebrities who are losing their homes in the south.”

As of Friday, November 16, the Woolsey Fire is 69% contained and has burned 98,362 acres. 616 structures have been destroyed, and three civilian fatalities have been reported. Two bodies were found in a burned car in Malibu, and the other body was found outside a home. The cause of the fire remains under investigation.

To the north of the Woolsey Fire, the Camp Fire continues to rage north of Sacramento and has become the most destructive wildfire in the state of California. The fire completely devastated the retirement community of Paradise, where 80-90% of homes were destroyed. The Camp Fire burned over at least 130,000 acres and is almost 40% contained.

The Camp Fire also shattered the California state record of highest number of fatalities in a wildfire. The record was previously held by the 1933 fire that killed 29 people in Griffith Park. As of Friday, November 16, 71 people are confirmed dead. Junior Siena Palese says, “71 people is so many, and it’s probably going to go up since there are so many people missing, which is really upsetting.”

Most of the human remains have been found in the town of Paradise, where few structures remain standing among the miles of burnt-out homes and businesses. Paradise residents had not been ordered to evacuate until nearly 20 minutes before flames reached the town on November 9. As a result, a number of residents frantically fled, while others may not have been so lucky. Over 1,000 residents of Butte County remain missing.

Although the cause of the Camp Fire remains under investigation, the Pacific Gas and Electric reported a power line malfunction minutes before the fire erupted, however, they did not alert nearby towns of the malfunction until after the fire destroyed the town of Paradise.

A third fire, the Hill Fire, broke out in Ventura County last week, burning 4,500 acres before being 100% contained as of November 15. The fire caused no fatalities and minimal property damage. The suspected cause of the fire is human activity.

Although firefighters believe they will be able to have all fires 100% contained by the end of the weekend, the lasting effects continue to worsen conditions for millions of Californian residents, many of whom are without homes. The air quality across the state has been weakened by the toxic smoke, causing many people to be hospitalized and schools to close.

Despite the relative containment of the fires, the effects will likely be seen for many years into the future. With a town nearly burned out of existence and the loss of a number of homes statewide, the rebuilding process will be grueling and long-lasting.