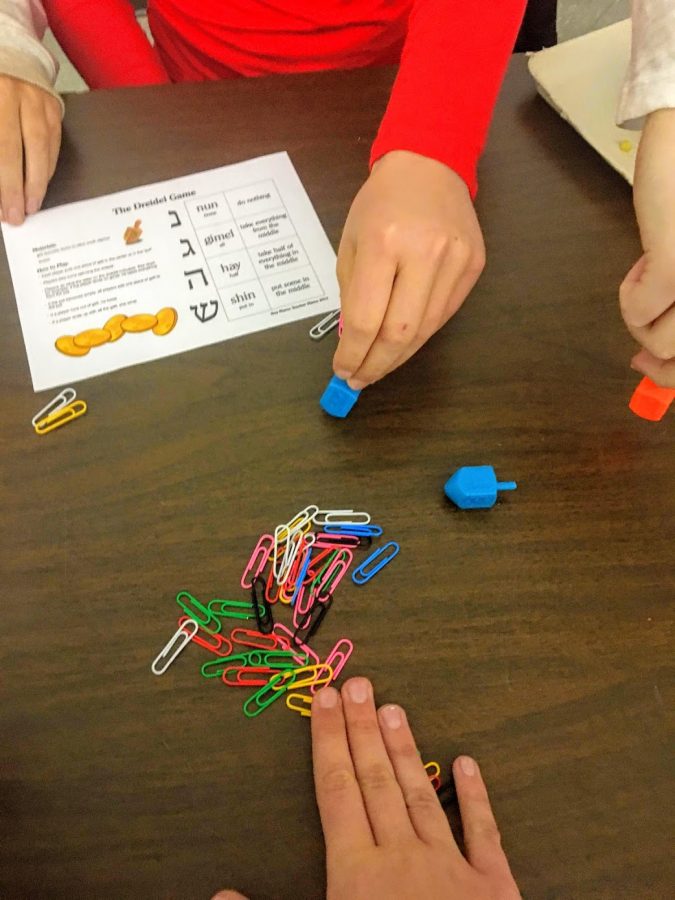 Members of the Global Citizenship Program play Dreidel during the Hanukkah Lunch Bunch on Monday.

My family’s annual celebration of Hanukkah squeezes a brief candle-lighting ceremony between my afternoon track practice and stacks of homework assignments. The past two years, Hanukkah has fallen during Winter Vacation, or what many call “Christmas Vacation.” When my family’s Hanukkah and Christmas celebrations coincide, I lend my attention to Christmas, as the holiday buzz across the school makes me feel excited to celebrate this favored holiday. This year, however, Hanukkah falls during Hingham High School’s celebration of “Inclusive Schools Week,” which I believe serves as an opportunity to truly appreciate my Jewish faith and the celebration of Hanukkah.

I am a member of Hingham High School’s small Jewish population. Most of the student body knows who the Jewish students are in their classes, often leading us to be the target of sympathetic glances during the Holocaust unit in World History courses and the discussion of the term “anti-Semitism.” Once I adjusted to receiving these looks after two years of discussing anti-Semitic topics, I accepted the fact that I would be subject to such sympathy when learning about Jewish history.

However, the events of this year have proven that anti-Semitism is not just a thing of the past.

11 members of the Jewish community were killed in a Pittsburgh synagogue in an attack driven by anti-Semitism just last month, earning the title of the largest mass shooting targeting Jews in American history. Similar anti-Semitic incidents have been happening all over the world, but this one strikes particularly close to home. Sophomore Danielle Harris, a fellow Jewish student, said, “the Pittsburgh shooting was simply devastating because the people in the temple only wanted to pray to God, and for doing this they were killed.” With this tragedy happening just a few states away, Jews all across the world may be subject to persecution.

Despite my constant reminders to take pride in my Jewish faith from my family members and former Hebrew School teachers, I fear being a member of a community that is so often targeted. This partially contributes to why I rarely mention that I celebrate Hanukkah, nevermind that I am Jewish.

The reason I refrain from discussing my Jewish faith with my peers has nothing to do with being discriminated against or being ashamed of my religion, because the Hingham community is extremely accepting and inclusive. I fear the exact opposite- the sympathetic glances from classmates while watching a film on the Holocaust because they see me as a member of a group that has been targeted for so long.

After the shooting in Pittsburgh this year, however, I determined that fearing my religion was giving in to the persecution. So I decided to proudly celebrate my religion during Inclusive Schools Week.

To kick off Inclusive Schools Week, I hosted a Hanukkah themed “Lunch Bunch” as a monthly event for the Global Citizenship Program on Monday. Club members who attended were given instructions on how to play the popular Hanukkah game Dreidel.

Watching the club members turn a game unfamiliar to them into an intense competition was entertaining to me. But the part that impressed me the most was watching students get involved in learning and celebrating the Jewish faith, even if it was just for a short 26-minute lunch period. They turned the game into a competition involving cheering, yelling, and sportsmanship, which allowed them to form a connection with Judaism and a better understanding of Hanukkah traditions. Senior Molly Schwall, President of the Global Citizenship Program, reflected, “I loved watching everyone become so interested in Hanukkah.” She added, “students were able to learn about a different religion that other students subscribe to, which is an important part of having and inclusive environment.”

With this week being Hanukkah, Jewish traditions were highlighted throughout a number of holiday activities, which is especially unusual in the midst of pre-Christmas season anticipation. The school’s new Jew-ish club hosted a Hanukkah party on Friday, where students could learn more about Hanukkah traditions.

Throughout Inclusive Schools Week, I noticed a sense of appreciation across the student body for Hanukkah, as a number of students attended Hanukkah themed events. As I realized how many members of the student body truly were interested in learning more about the Jewish faith, I gained a strong sense of pride in being able to be a part of this religion.

With a new-found sense of pride in my Jewish faith, I was able to fully appreciate Hanukkah this year.

Instead of mumbling the candle-lighting blessing while devoting my attention to my homework on my computer as I have done in the past, I observed the candle-lighting ceremony each night of my Hanukkah celebrations this year. Though I never used to bring the holiday up in conversation before, I now enthusiastically describe my nightly celebrations to my intrigued friends because I am proud to be able to say that I am Jewish.