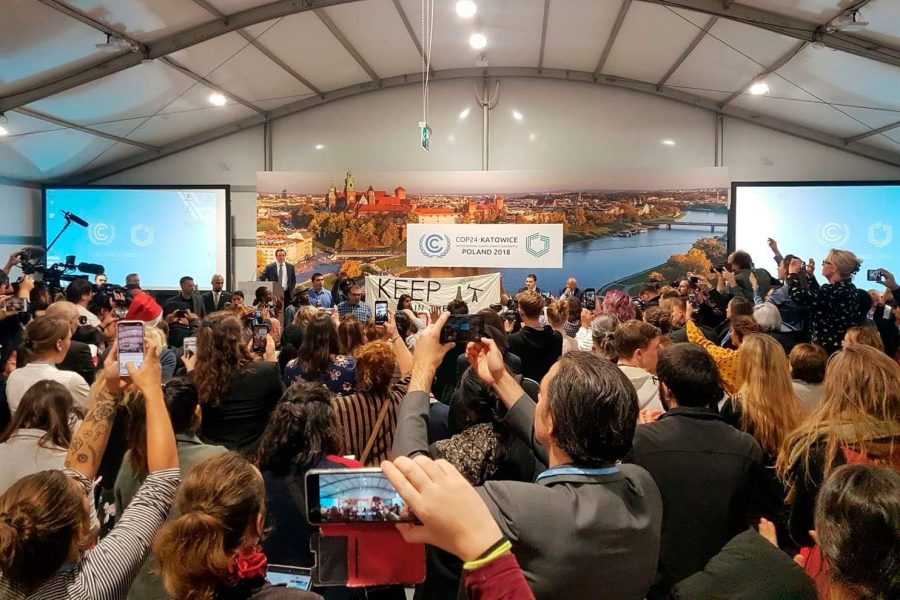 Organized protesters interrupting the Unites States' presentation at the Katowice Climate Conference on Monday. Photo by Karolina Jonderko for The New York Times.

“These fossil fools are a joke,” an activist shouted at the Trump administration’s delegation to the United Nation’s 2018 Climate Change Conference. “But the impacts on our frontline communities are not.”

The activist’s cry kicked off a ten-minute, coordinated protest of Trump’s only planned public contribution to the two-week conference in Katowice, Poland: a presentation on the benefits of fossil fuels and fracking. Protesters laughed at the delegation, lead by President Trump’s leading advisor on climate and energy, Wells Griffith, before chanting, “Keep it in the ground!” and “Shame on you!” After the demonstration, the protesters left the room in an orderly fashion.

However, the U.S. delegation appeared unperturbed by the disturbance, and Griffith launched into a pitch for “cleaner” coal, hydraulic fracking, and nuclear energy plants. He was adamant about the crucial role that the fossil fuel industry plays in providing millions of jobs for American citizens and questioned the viability of “clean” energy, such as wind and solar power. “We strongly believe that no country should have to sacrifice economic prosperity or energy security in pursuit of environmental sustainability,” he said. “It is important to the overall climate discussion that we consider what’s realistic and pragmatic. Energy innovation and fossil fuels will continue to play a leading role.”

This position stood in direct opposition to the aim of the conference, which was to “limit global warming to well under 2°C this century” by reducing use of fossil fuels and to “ensure that climate action is transparent” and “send a signal that governments are serious about addressing climate change, according to the COP24′ official website.

The presentation at the conference is in line with the Trump administration’s prevailing, skeptical stance on climate change. Trump has openly dismissed concerns about climate change, most notably when he announced his plan to draw America out of the Paris Climate Agreement of 2015. He amplified his stance this November by refusing to formally acknowledge the fourth and latest National Climate Assessment, which predicted disastrous human casualty and economic loss as a result of climate change. This follows a similar dismissal of the UN’s climate report, released in October, which warned that the world has only twelve years left to cut carbon emissions to avoid catastrophic warming. Indeed, at the conference, Griffith briefly addressed his and the Trump administration’s condemnation of the two reports, saying, “Alarmism should not silence realism.”

In light of Trump’s history of climate change denial, Monday’s presentation did not come as a surprise.

The Trump administration also announced its plans for a fossil fuel pitch at the start of the conference, on the third of December. The early news gave the protesters plenty of time to prepare. However, they weren’t the only ones working to subvert Trump’s plans. Although many of the delegation shared Trump’s and Griffith’s stance on climate change, a number of scientists and local government officials who sought to address climate change’s validity and discuss solutions to its threat also comprised the US delegation. Among this number were officials from California, Washington state, and Pittsburgh, Pennsylvania.

One scientist in the delegation, Carla Frisch, told the National Public Radio, “I think [our participation] reminds them that the U.S. is serious about reducing emissions.” She added, “We do have, maybe, a peer pressure role on the international scene.”

Despite the optimism of this group of climate change believers, others were less confident in their ability to make real impact on the U.S. delegation’s overall message to the conference and to the world. “They don’t have credibility and leadership capacity and leverage,” explained Todd Stern, the United States’ chief negotiator at the 2015 Paris Climate Agreement.

As Trump cannot legally exit the Paris Climate Agreement until after the 2020 election, his administration will maintain its stance steadfastly in climate change negotiations until the end of Trump’s term. The impact of the United States’ dismissal of climate change and sustainable energy sources remains to be seen.