For the Fore River Basin: The State of Compressor Station Opposition 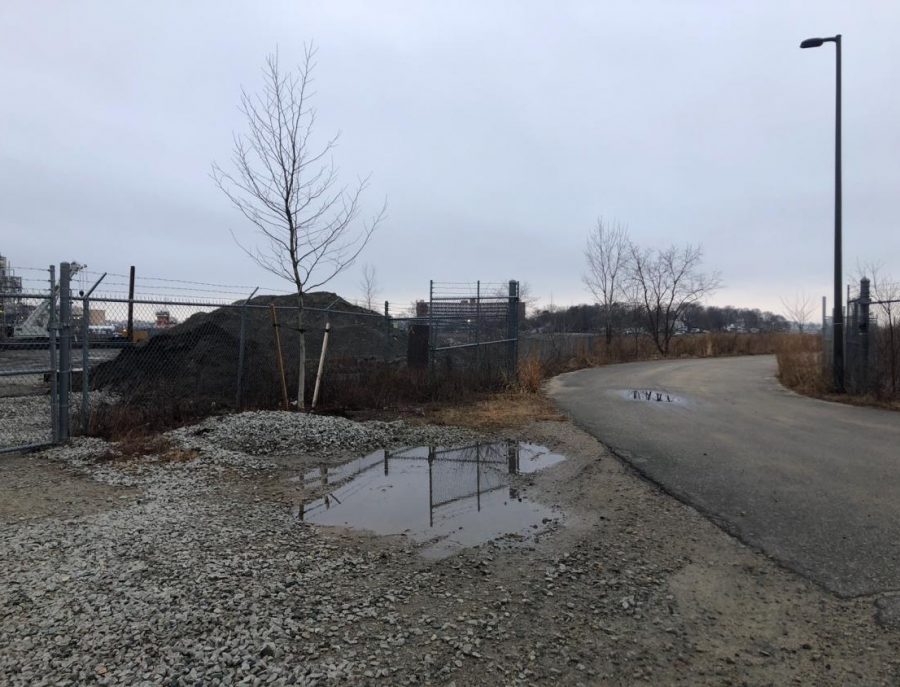 The proposed compressor station would occupy some of the empty land near the Fore River Bridge- an area, opponents argue, that is already highly industrialized.

Nearly a month ago, the Massachusetts Department of Environmental Protection approved air quality permits for the proposed compressor station in the Fore River Basin of Weymouth. The Spectra Energy-Enbridge compressor station, which would facilitate the transport of natural gas to Beverly, gained approval from the Federal Energy Regulatory Commission (FERC)  in January 2017.

The Baker administration’s recent issuing of permits is the first step the state has taken in approving the project. The action came after a Metropolitan Area Planning Council assessment predicted “…no substantial changes in health from direct exposures from the station itself with the exception of sound levels during construction.”

This development, however, does not sit well with the lawmakers and community activists who have long opposed the establishment of the compressor station in Weymouth. They state the compressor station will damage quality of life for residents by bringing air, odor, and noise pollution to the already heavily industrialized Fore River Basin area, which sits in Weymouth but is close to Braintree, Quincy, and Hingham.

On their website, community activist group Fore River Residents Against the Compressor Station- one of many organizations formed by concerned citizens to combat the proposal- claim the project “…poses a serious threat to the health, safety, environment, and economy of the South Shore.” Republican State Senator O’Connor, who represents Weymouth and Hingham, told the Harborlight in a September interview, “…there is absolutely no price tag that you can put on quality of life, quality of air.” In addition to grassroots activism and lawmaker opposition, local officials in surrounding towns of Weymouth, Braintree, Quincy, and Hingham have also expressed concern for the environmental impact of the project. 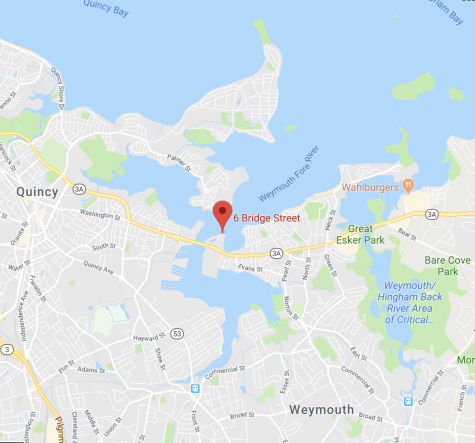 The proposed location of the Spectra Energy-Enbridge Compressor Station. The Weymouth site is in close proximity to Quincy, Braintree, and Hingham. (Image via Google Maps)

The Baker administration’s approval is a major blow to the opponents of the Spectra Energy-Enbridge station. Jennifer Mathien, who leads activism group Hingham Residents Against the Compressor Station (HRAC), characterized the move as “a major disappointment.” In a statement released after the permits were issued, Rep. James Murphy (D-Weymouth) called the decision “reckless and irresponsible.”

Though the project must receive coastal zone management and waterways permits before construction can begin, this first round of permits signals the governor is willing to move forward with the proposed station. In response, activists and lawmakers alike have entered a new phase of opposition. As Sen. O’Connor acknowledges, “[The permits] have definitely shifted our focus a little bit.”

In response to the Baker administration’s action, community groups and local activists have increased the urgency of their message and advocated for appealing the air quality permits.

Andrea Honore, a Weymouth resident and opponent of the station, has restarted her lunchtime sit-ins at Governor Charlie Baker’s office. From February to July 2017, Honore spent 82 lunch breaks waiting for a face-to-face meeting with the governor, according to the Patriot Ledger. She ended the sit-ins after Baker in 2017 ordered the aforementioned environmental impact study, but returned January 15, 2019 after he approved the air quality permits.

In a written statement, Honore claimed Baker’s administration underfunded the Health Impact Assessment (HIA) on which the administration based its decision. She also argues that the HIA was not quantitative and did not adequately include “…investigation of safety and security, and addressing coastal resiliency as it applies to the siting of the compressor in a FEMA flood zone.”

In a email, Jennifer Mathien compounded these arguments, explaining, “…the HIA was extremely limited in time and scope, used data from the gas company itself instead of unbiased data, and, even with those flawed inputs, showed significant levels of unhealthy, carcinogenic pollutants already exist in the area, which would only be exacerbated by the addition of the fracked gas compressor.”

Honore hopes to pressure Baker into denying future permits for the project. In a letter to Governor Baker, Mathien and HRAC voiced a similar belief in the need for Baker to deny future permits. All told, community activism seems honed in on stopping the project in its tracks; Mathien maintains, “Opposition groups will continue to fight the proposed compressor at every angle possible.”

Braintree, Weymouth, and Quincy have already filed appeals against the air quality permits. On January 31st, the Hingham Board of Selectmen voted unanimously to join these towns in filing an appeal. Still, there has been little word from the Baker administration that points towards him caving. Baker generally claims the problem is a federal one, and has previously stated that he “basically had no choice” but to approve the permits.

On both Beacon and Capitol Hills, Massachusetts lawmakers are pursuing multiple avenues to oppose the project. State Senator O’Connor, who is on record opposing the station as early as 2015, has largely spearheaded opposition efforts within the state legislature. He is joined by vocal opponents Democratic Rep. John Murphy of Weymouth, Weymouth Mayor Bob Hedlund, and a slew of South Shore lawmakers that have joined the efforts against the project. Hingham’s Representative Joan Meschino has played a supporting role in the opposition.

Already, O’Connor has proposed several bills that would effectively halt the construction of the compressor station, including restrictions on building stations in residential areas and mandatory air monitoring stations within a one mile radius of a station. He has also proposed guidelines in order to ensure that future projects, if they are proposed, must automatically undergo Health Impact Assessments.

The senator also told The Harborlight he is planning to propose a Massachusetts Senate resolution in opposition to the project. “I really feel confident that we have a lot of folks behind us in the Senate leadership that are going to join us and support the bills and resolution,” he explained.

In recent weeks, U.S. Congressman Lynch has also made moves to oppose the station. As he told Wicked Local, “While I was hopeful that common sense would prevail, I continue to believe that the public health and safety is threatened by this project and we have no choice but to continue to fight against its completion.”

Where does this end?

As mentioned before, federal court case is one possible end to the compressor station fight. Under that scenario, Baker would cave to activist pressure and reject one of the permits not yet approved. This would, in all likelihood, trigger a federal lawsuit in which a circuit court would decide in Baker’s rejection had merit under federal law. In all likelihood, the circuit court’s decision would be final.

Sen. O’Connor says he is “very confident” that a federal court would rule in the state’s favor, citing a 2017 Second Circuit Court of Appeals decision. In Constitution Pipeline Co. v. New York State Department of Environmental Conservation, the court ruled against the construction of a natural gas pipeline in the state. While the facts of that case were substantially different from those surrounding the Fore River Basin project, O’Connor argues, “This whole structure of federal preemption, and ‘what they say goes’… all that is going out the window right now. Courts are siding with states, and now’s the time to really capitalize on that.”

The aforementioned laws proposed by O’Connor that would effectively block the project have not been voted on in either the MA House or Senate. If passed, they could also trigger a federal lawsuit. This case, however, would likely be argued on Constitutional grounds- most notably, the Supremacy and Interstate Commerce Clauses. Federal cases dating back to McCulloch v. Maryland (1819) have affirmed the supremacy of federal laws and projects over state statutes. Opponents of the compressor station would face a much tougher path to victory in this scenario.

The recent flip of the U.S. House of Representatives from Republican to Democratic provides another path to halting the project. Democratic Congressman Lynch now has avenues and allies with which to pursue a stop to the federal project.

Lynch serves on the Transportation and Infrastructure Committee, which has some jurisdiction in the area of natural gas projects. He also is a member of the Committee on Oversight and Reform, and this committee seat gives him new possibilities to affect change on a federal level. Lynch has already called for a federal review of the compressor station proposal, which could result in the halting of the project. That being said, FERC projects are notoriously difficult to combat without litigation.

Despite a difficult path to victory, the opposition is far from over. And on Thursday, February 7th, the Metropolitan Area Planning Council (MAPC) Executive Director Mark Draisen broke ranks with Baker when he told WGBH he was not in support of the station. MAPC was responsible for the HIA that Baker based his decision upon.

Sen. O’Connor cites the community activism as his inspiration for continuing the fight on a legislative level. “They have led this fight, tooth and nail, with passion and with dignity,” asserted. Meanwhile, grassroots activists show no sign of giving up. As Honore told the Harborlight, “It ain’t over until it’s over.”

Jennifer Mathien and HRAC will be presenting to the HHS Green Team on Thursday, Feb. 14.