Off to the Races: A Guide to the 2020 Presidential Candidates 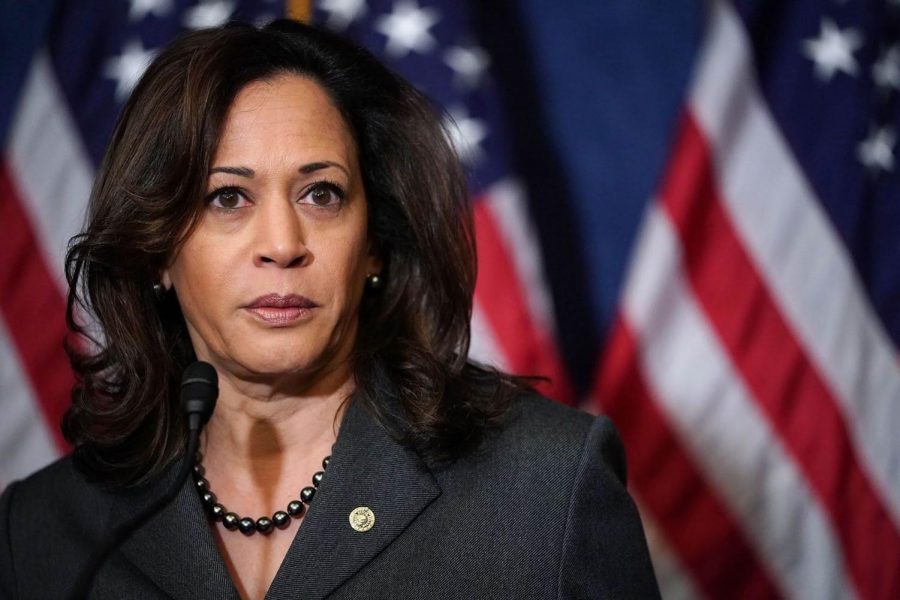 Sen. Kamala Harris is an early frontrunner in the Democratic primary race. Pictured here during a 2017 news conference. (Photo by Chip Somodevilla/Getty Images)

The primaries are now just over a year away, and for 2020 presidential hopefuls, the time has come to begin campaigning. So far, more than 500 Americans have filed their bids with the Federal Election Commission, the agency overseeing campaign finances, and, although experts speculate that the Democratic field could be the largest ever, the landscape continues to ebb and flow; 56% of Democrats report having no candidate preference yet, and Republican challengers to Trump, who decided to re-run in 2017, remain few and far between. With Election Day so distant and so many candidates vying for their party’s nomination, few have started to consider the candidates yet.

“I haven’t started following it,” explained freshman Aly Chang. Fellow freshman Kalyna Wilkin echoed this sentiment, adding, “It’s going to be interesting to see if the future president will change anything that Trump did.”

But even this early on, as opinions are just beginning to form, a handful of figures have already pushed to the forefront of the race.

Hailing from New York, the Harvard graduate and former governor of Massachusetts announced on February 15th that he had formed a presidential exploratory committee. He aims to take the Republican party in new directions, explaining that he hopes to see it “assume once again the mantle of being the party of Lincoln.” As the sole contender, at this point, to Trump’s bid for re-election, Weld will face an uphill battle as he attempts to secure the Republican nomination; within the party, Trump’s approval ratings are at 89%, and historical precedent strongly suggests that this makes him the favorite Republican candidate for the 2020 election.

Booker announced his candidacy on February 1st. With a law degree from Yale, experience as a mayor, and a role in the Kavanaugh confirmation hearings, he already has a strong political platform. He has been a vocal advocate of several egalitarian bills, including some aimed at expanding affordable healthcare, alleviating poverty, and raising the minimum wage. He has been the subject of some controversy for a column he wrote while an undergrad at Stanford, in which he explains an incident of sexual misconduct after realizing he was “basking in hypocrisy.”

This popular Indiana mayor and Rhodes Scholar announced his plans to run on January 23rd. In addition to studying at Harvard and Oxford, Buttigieg has served as the mayor of South Bend and as part of the Naval Reserves, and has expressed support for a single-payer healthcare system and the Paris Climate Accord. If elected, Buttigieg would be the first openly-gay man to occupy the White House. In spite of his remarkable accomplishments, there is skepticism that he is too young and inexperienced for the presidency.

As a graduate of Stanford and Harvard Law School, Castro has advanced quickly through the political ranks, serving as San Antonio’s councilman and mayor as well as the Housing and Urban Development Secretary under Obama. After announcing his presidential bid on January 12th, Castro expressed hopes that he could be the “antidote to Trump” and explained that, as he sees it, the United States is in the midst of a leadership crisis. He has been criticized for his violation of the Hatch Act; during the 2016 presidential campaigns, Castro explicitly endorsed Hillary Clinton, even though he was serving as HUD at the time.

Having launched two businesses and served in the House of Representatives, Delaney is both a savvy businessman and politician. In an effort to get ahead of other candidates, Delaney cemented his plans to run for office in August of 2017. He has expressed desires to end partisan gerrymandering if elected and faces challenges with name recognition.

Potentially the first Samoan-American and Hindu to serve in office, Hawaiian native Gabbard has experience on the House of Representatives and in the Hawaiian Army National Guard, fighting both in Iraq and in Kuwait. She announced her desire to run on January 11th, and though she is a strong candidate, Gabbard has faced criticism for her young age and relative lack of congressional experience. Additionally, she has become somewhat controversial for her role in the Alliance for Traditional Marriage, a group which, in the 2000s, successfully campaigned to gives states the power to “reserve marriage to opposite-sex couples.”

Gillibrand declared her candidacy on January 15th. As a graduate of Dartmouth and UCLA with experience in both the House of Representatives and the Senate, Gillibrand’s campaign has thus far been characterized by a strong opposition towards what she perceives as institutional racism, greed, and corruption in Washington D.C. She is also anticipated to include postal banking as part of her platform and has faced criticism for her ideological shifts over the past decade.

The former district attorney of San Francisco and attorney general of California announced her plans to run for president on Martin Luther King, Jr. Day, explaining that she feels “a sense of responsibility to stand up and fight.” Her campaign thus far has been promising; on its first day, it raised approximately $1.5 million. Known for her role as a prosecutor, particularly her questioning of Jeff Sessions and Brett Kavanaugh, Harris would be the first African-American and Indian-American person to occupy the Oval Office. She has also, however, been criticized for some of her actions as attorney general. “There were unfortunately situations that occurred where my clients took positions that were contrary to my beliefs,” she said.

A graduate of Yale and the University of Chicago, Klobuchar served as a corporate lawyer and a county attorney before becoming Minnesota’s first female senator. She announced her candidacy on February 10th. Like Harris, she played a significant role in the confirmation hearings of Kavanaugh, and she has faced criticism for having one of the highest staff turnover rates amongst Senate members.

Warren has served as the Massachusetts state senator since 2013. She entered the presidential race on February 9th, and since then has built a strong platform chiefly concerned with rebuilding the middle class. As a Senator, Warren advocated for the creation of the Consumer Financial Protection Bureau and for progressive takes on student loan reform and corporate capitalism. She has been the subject of considerable controversy for her handling of DNA test information, which she made public to prove her distant Native American ancestry after it was discovered that she was listed as a minority at the universities where she taught law. She has since apologized to the Cherokee nation for doing so.