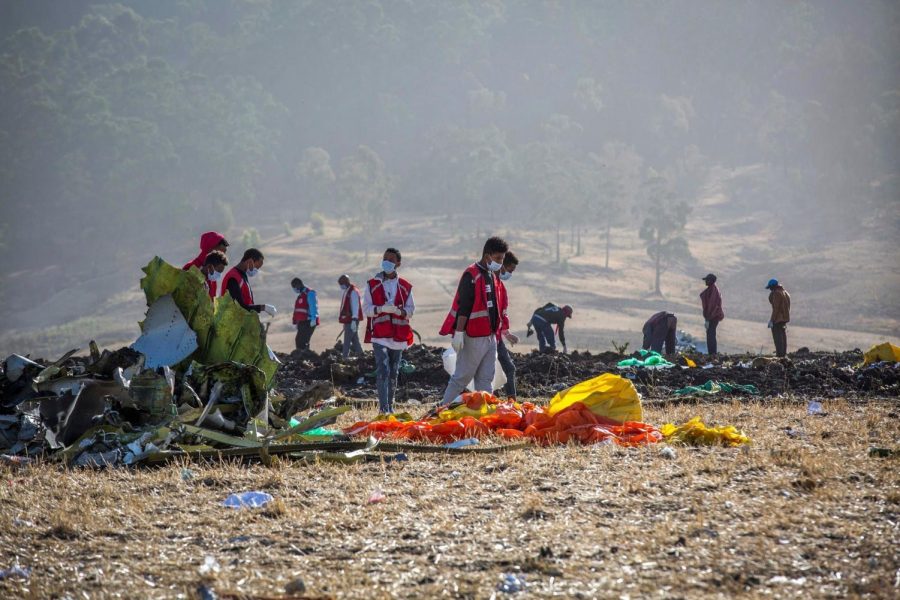 Rescuers clean and look through the site of the Ethiopian Airlines Flight 302 crash. (Mulugeta:Associated Press)

Disaster struck Ethiopian Airlines on the morning of March 10 when Flight 302 crashed in Bishoftu, Ethiopia, killing all 149 passengers and 8 crew members. The plane departed from Bole International Airport in Addis Ababa, Ethiopia, at 8:38 a.m. and was headed for Nairobi, Kenya. On board, there were passengers from at least 35 different countries, including 8 from the United States. Many passengers were headed to a United Nations Environmental Conference.

Once the plane took off, it began to accelerate and tilt up and down in the air. As the crew tried to gain control of the plane, the pilot asked to return back to Bole International. Then they lost connection with the airport, and just six minutes after the original departure, the plane went off the radar and crashed.

This plane was a Boeing 737 Max 8, the same type as the Lion Air Flight 610 plane that crashed in Indonesia back in October of last year. Flight 610 had departed from Jakarta on October 29, and the crew experienced similar problems when trying to fly the plane as the crew aboard Flight 302 did. The crew fought to keep the plane in the air, but the nose of the plane kept dipping, which led to the crash that occurred 12 minutes after departure. The crash resulted in the loss of all 189 passengers on board.

Recently, a new feature has been added to the Boeing 737 Max 8 model called the “Maneuvering Characteristics Augmentation System,” or “MCAS.” The plane is designed with sensors to detect when the nose of the plane points too far upward and starts to stall and then automatically activate MCAS. In this scenario, MCAS should then point the nose of the plane down to prevent the plane from flying dangerously upward. Boeing and the Federal Aviation Association (FAA) did not inform pilots about the new MCAS feature, and, according to the New York Times, the pilot of Flight 302 was not trained to use the MCAS sensors.

Investigators believe the Lion Air Flight 610 crash was a result of a malfunction in one MCAS sensor which caused the plane to dive downward. Though there are similarities between the Ethiopian Airlines and the Lion Air crashes, and they involved the same model, investigators have not announced to the public whether the causes of the two crashes paralleled; however, upward pointed stabilizers located in the crash site in Ethiopia indicate that the MCAS activated, since upward pointed stabilizers are how the MCAS system directs the nose of the plane downward.

The possible correlation between the crashes scares many across the globe. Several countries have taken action, including the United States, to either ground or temporarily ban the Boeing 737 planes. Both Ethiopia and Indonesia have grounded their remaining Boeing 737 Max 8 planes. The United States waited until Wednesday, March 13, to ground all Boeing 737 Max 8 and Max 9 planes. The FAA was criticized for hesitating on grounding the model since other countries made the decision much sooner. Boeing also made an announcement that same day advising the entire globe to ground all Boeing 737 Max 8 planes.

Freshman Richie Sommers asked, “What [would] the economic impact be if they were forced to ground more than this type of plane?” This crisis has already taken a toll on the financials of Boeing just because of the groundings and bans of the Boeing 737. Boeing’s stock value dropped 10% (a total loss of $25 billion) just in the four days after the Ethiopian crash.

Freshman Kalyna Wilkin supports the groundings and bans. She commented, “It could just be a coincidence or there could be a serious undetected problem with the plane model. If they ground the planes they could prevent future crashes if there is something wrong with the planes. And if they don’t find anything, it’s better to be safe than sorry.”

As the world tries to understand the connections between the two crashes and Boeing struggles with the aftermath of these tragedies, the Boeing 737 Max 8 remains responsible for the loss of 346 lives.