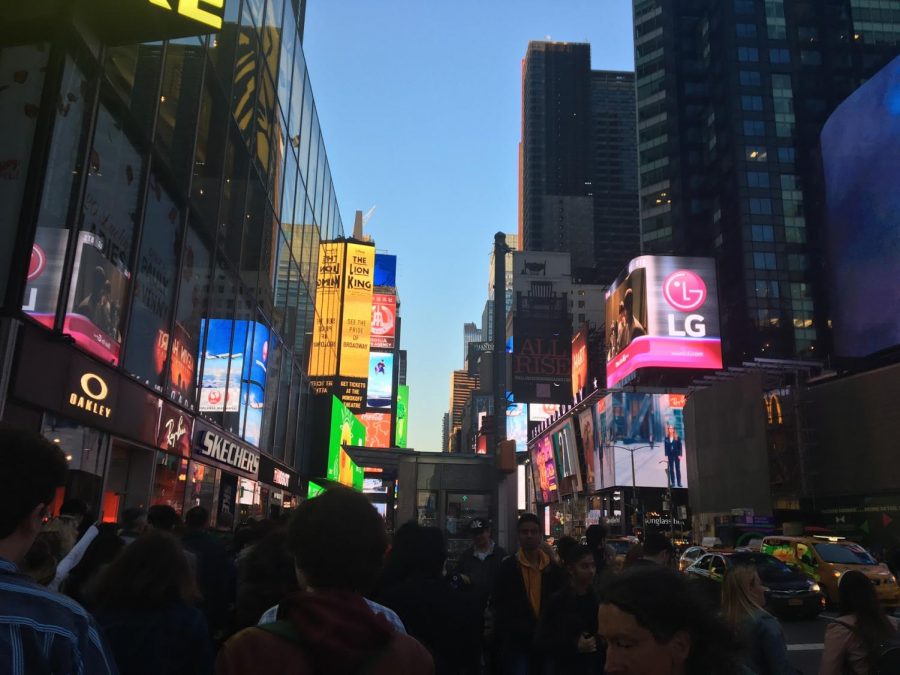 The Hingham High Drama Club students see a sign for To Kill a Mockingbird with the phrase, All Rise, as they leave the show and head for dinner.

The time was 6:15 a.m. on Friday, April 5. Most Hingham High students were still sleeping. Some were just waking up. Not that many were already at school, but 50 theatre loving students were. These students, all part of the Hingham High Drama Club, were headed to the Big Apple for a weekend of theatre.

When the bus arrived to the city, the students first got a quick bite to eat. Afterward, the bus headed to the Museum of Modern Art where they stayed until they went to dinner at Puglia Restaurant in Little Italy.

After dinner, the group visited Roundabout Theatre Company Studio 54 for the first Broadway show of the weekend: Kiss Me, Kate! The show, with the play written by Sam and Bella Spewack and the music and lyrics by Cole Porter, was a hit among the students. Seeing Corbin Bleu, one of the stars of High School Musical, was one of the highlights of the weekend.

The students experienced some more of this show the following morning at the Broadway Workshops. While half of the students received a tutorial from a makeup artist from Broadway’s The Lion King, Christine Cornish Smith of Kiss Me, Kate! taught the other half of the group a dance routine from the show’s number “Too Darn Hot.” After offering her Broadway moves, Smith shared what she loves about her experience with Kiss Me, Kate! She said, “My favorite part of being in Kiss Me, Kate! is being a part of such a positive and supportive community of artists!” Smith dances in the ensemble of “Title Dancers” along with being the understudy for the Lois Lane character.

After the workshops, the group stopped for lunch at a restaurant where the students could choose from ramen noodles, pizza, Mediterranean food, salad, and more. They then departed for their second Broadway show, To Kill a Mockingbird, at Sam S. Shubert Theatre.

The students and chaperones loved this version, as written by Aaron Sorkin, of the classic novel by Harper Lee. Freshman Kate Schembri commented, “After reading the book in class, it was really cool seeing To Kill a Mockingbird on Broadway, and it made me understand it better. It was interesting because they switched around the order of the events, and it made it more engaging and fun! 10/10 recommend!” Freshman Christian Peterson agreed, “To Kill a Mockingbird was amazing. The acting was so good. Definitely worth it.”

Before heading to an improv show, the group went to dinner at Hard Rock Cafe where it enjoyed burgers, chicken, mac and cheese, and cheesecake for dessert. The ambiance of the restaurant fit perfectly for the trip with its music which the drama students sung along to.

The last event of the night was the Chicago City Limits Improv Show, which included a repertoire of musical improv and normal improv with scenarios instigated by the HHS drama group. Their first number “The Birds Blues” came from two suggestions made by members of the Drama Club.

The next and final morning started off with a tour of Radio City Music Hall complete with a visit from a Rockette. The group toured each room including the stage while the guide taught everyone all about the history of Radio City Hall and the events it still hosts today.

After the tour, the bus dropped everyone off at Chelsea Market where students were free to roam around the stores for lunch and shopping. Some of the food available included Mexican food, American food, sandwiches, salads, and seafood.

For the final show of the weekend, the crew attended Be More Chill at the Lyceum Theatre. The show, with music and lyrics by Joe Iconis and dialogue by Joe Tracz, received mixed reactions from the Drama Club. While some were thrilled with the show that focuses on a high school student trying to fit in and date his crush, others found the storyline too weird for their liking.

HHS Drama Director, Anita Levy-Sisk, loves the NYC trip, and she likes the discussions held after each show. She commented, “My favorite part is talking to the kids about the shows we see and hearing everyone’s differing opinions.” Even with Be More Chill receiving these mixed reactions, it was clear the students still had a good time watching it.

The entire weekend was filled with these good times, as the trip always is. Levy-Sisk added, “You know it’s a great trip when even the adults have a great time!” Sophomore Nathan Lavoie noted, “The HHS Drama Club NYC trip was one of my highlights all year. From seeing three fantastic Broadway shows to Broadway workshops and museums, it was an amazing experience and one I’ll never forget!” Based on the raving reviews of the trip, it is no wonder why 50 students woke up so early on Friday.