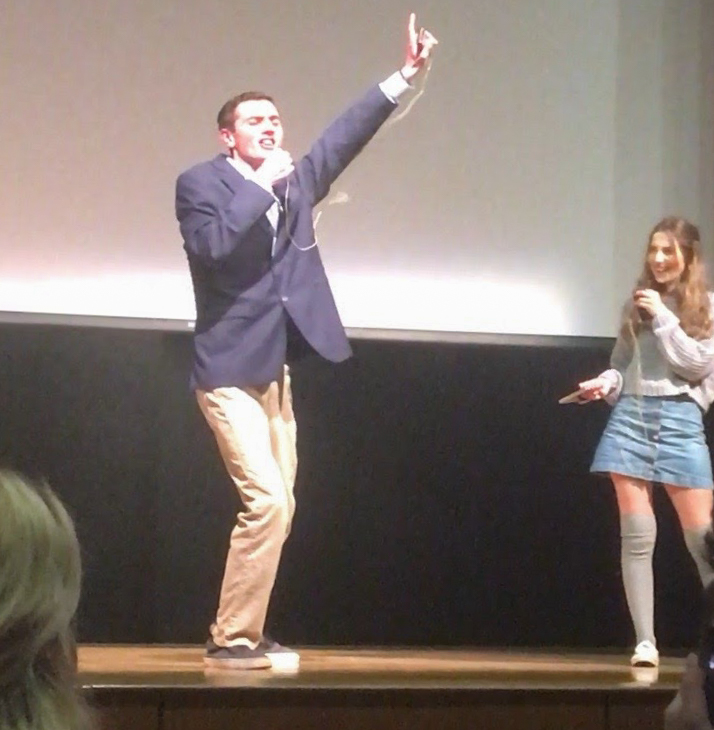 Sophomore Nathan Lavoie and Junior Olivia Barbuto perform their rendition of What I've Been Looking For from High School Musical.

Last Monday at 7 p.m., Hingham High School Drama Club students filed into the school for Thespian Night. This night honors devoted theatre students who have participated in 4+ shows over the course of two consecutive years, working as tech for at least one show. This feat earns HHS theatre kids the title of “Thespian.” Along with Thespian recognitions and some other awards, the night–which to non-theatre students can be described as something close to a sports banquet–is also when Drama Club Director Ms. Levy-Sisk announces next year’s club officers and shows. The night is filled with suspense, anticipation, and lots of excitement, and also serves as a reminder to all who attend regarding how loving the world of theatre is, especially at HHS.

The night started off with a welcome from the current senior co-presidents of the Drama Club: Casey Hussey and Andersson Perry. They announced that they would hint at the upcoming fall musical show throughout the night with three clues. The final clue that caused much speculation was that next year’s musical is connected to Italy, Greece, England, and Sweden.

After their introduction, the attendees watched the traditional senior impressions video that the juniors created, teasing the Drama Club’s seniors. Though hilarious and fun, the video also gave a bittersweet goodbye to the beloved senior members that everyone will miss dearly.

Ms. Levy-Sisk then took to the podium to congratulate the Thespians. The following students are newly inducted Thespian members:

These students are second year Thespians:

And, finally, the following people are third year Thespians.

After recognizing the Thespians, Ms. Levy-Sisk also gave out awards and speeches about particular Drama Club members. The following students won awards which are listed next to their name:

After these students received their awards, Ms. Levy-Sisk announced the results of the 2019 Drama Club Officer Election for the 2019-2020 year:

There then was short snack break, during which the students chatted about the awards and the upcoming show season. Afterward, the cabaret portion of the evening began with junior Morgan Willison singing a beautiful song while she played the guitar. Then, sophomore Nathan Lavoie and junior Olivia Barbuto performed a rendition of “What I’ve Been Looking For” from High School Musical. Nathan then returned to the stage this time for a hilarious improv scene with sophomore Benton Perry and senior Andersson Perry. Finally, the seniors performed a sing-along and brought up underclassmen to dance.

Next year’s drama club co-presidents, Morgan Willison and Lizzy Ford, spoke on their Thespian Night and their excitement for next year. Morgan commented, “I want to say that I’m super super excited for next year and so optimistic about how awesome it’s going to be. Thespian Night was probably one of the best nights of the entire year just because of how many great friends I saw and even if you weren’t in all the shows together, you got to meet your friends!” Lizzy added, “For me, I would say–I mean I think Morgan can relate to this–it was definitely one of the greatest nights of our life because we became the two drama club presidents, and it was really fun!”

Lizzy continued, “It was really spectacular because something that you don’t see often is Ms. [Levy-]Sisk actually being nice to you. She yells at you all year, but the reason that you keep doing it is because she tells you [at Thespian Night] all the good things you did this year and you’re like ‘oh sick, so she actually does respect us and care about us.’” Morgan chimed in, “It’s so rewarding” to which Lizzy responded, “Yeah it really is, and she is like the drama mom… it’s great.”

Thespian Night was quite the event, filled with honors, awards, and entertainment, but most of all, it once again displayed the beautiful relationships formed in Drama Club that continue to drive the club to success.