A Bittersweet Symphony: Band and Orchestra Collaborate for Their Final Concert 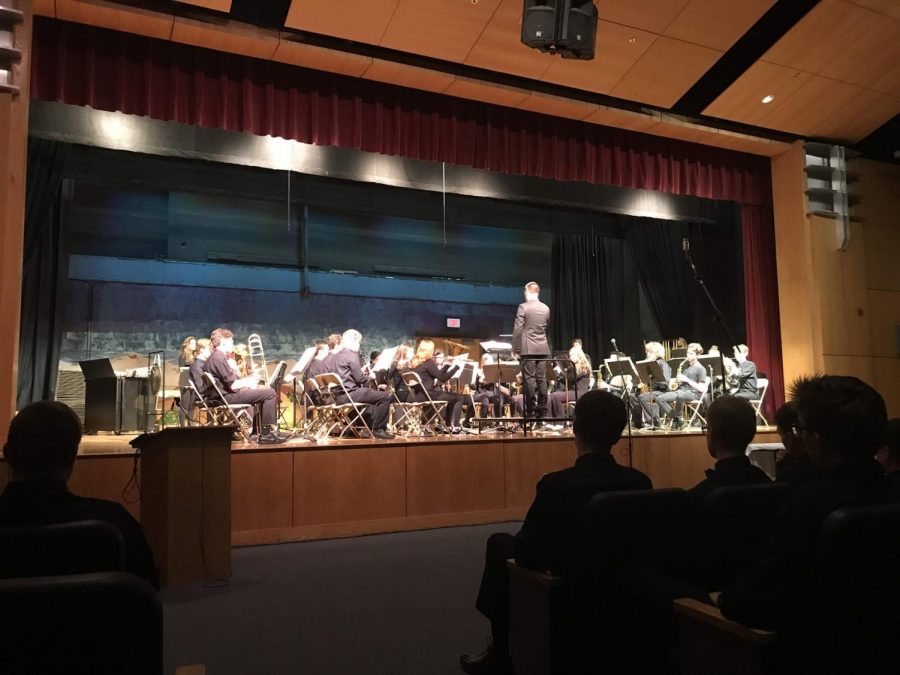 For Hingham High School musicians, spring is a bittersweet season; on one hand, it is a time to celebrate the year’s progress with gusto and flourish, but on the other, it means bidding farewell to graduating seniors. These competing emotions culminated last Tuesday, when the band and orchestra performed in the annual combined spring concert, and later participated in an awards ceremony honoring graduating seniors as well as notable musicians.

Anticipation ran high as the first performers, the Hingham High School Orchestra, filed onto stage; the spring concert is, after all, the year’s concluding event, and for senior musicians it signifies the end of an era. Yet in spite of the evening’s tint of sadness, the opening piece—a rendition of Louis Armstrong’s “What a Wonderful World” by the orchestra’s seniors—did not fail to fill the auditorium with joy. Indeed, the song’s spirit of delight and simple gratitude was a fitting preface to the concert and to the awards ceremony which followed.

Following this poignant opener, the remaining members of the HHS Orchestra joined the seniors for a performance of Rachmaninov’s “Rhapsody on a Theme of Paganin,” a swaying, gentle piece that brought a pleasing sense of tranquility to the audience. Immediately thereafter, members of the Freshmen Orchestra and select members of the band, all of whom had been waiting quietly on stage during the Rachmaninov, put up their instruments for what was arguably the climax of the evening: the Symphony Orchestra performance. This large group, which met a total of five times outside of school to rehearse, played two pieces. The first, Mussorgsky’s “Night on Bald Mountain,” was filled with menacing passages and frightening sound effects, while the second, the fourth movement of Dvořák’s “Symphony No. 9 in E Minor,” was grand and commanding.

In both cases, the performances succeeded spectacularly in inciting sincere, even passionate, emotional responses from parents, peers, and patrons alike. “I loved being able to see the students form various music departments collaborate and celebrate the creation of art,” explained freshman trombonist Maddie Eikinas. Freshman violist Emily Conroy echoed these sentiments, noting that it was “cool to see how the band and strings came together.”

As the audience applauded the Hingham High School Orchestra, its members left the stage and Hingham High School’s Concert Band filed into their seats. The group had prepared three pieces: Scott Watsons “Night Journey,” Larry Daehn’s “Adagio for Winds,” and Michael Giacchino’s “Selections from ‘Incredibles 2.’” The last of these was met with particular enthusiasm from the musicians and audience, since Concert Band members themselves voted to play the piece; given the music’s rousing, catchy melodies and relatively current place in pop culture, it is easy to see why. Still, the other two pieces were by no means disregarded. Freshman euphonium player Ella Niehoff spoke with a hint of bias when she claimed that she “especially loved the euphonium solo in ‘Night Journey,’ [it] could not have been done better.”

Drawing the evening to the close was the Wind Ensemble, which, like Concert Band, played three pieces. The first, Sean O’Loughlin’s “Burst,” was a fast-paced, lively song that contrasted almost comically with the second piece, tellingly titled “Sleep” by composer Eric Whitacre. It was the final piece, however, which proved to be the most moving; composed by Andrew Boysen, Jr., the tonal work was conceived in celebration of the life of Lynn Jones, a peer of Boysen’s and a baritone saxophone player who was killed in a car crash. Jones was also a passionate poet, and just days before his death he had written a poem called “I Am,” after which the musical piece is titled; in this way, the music was intended not to be mournful or morose, but rather a means to celebrate a life well lived. Such an affirmation of life was, in an admittedly dramatic and morbid way, extremely pertinent to the concert and its bittersweet nature. Niehoff summarized the event well, saying, “Although the concert was exciting, it was also a sad day as the orchestra and band said goodbye to their seniors.”

The evening concluded with an awards ceremony that honored graduating seniors, participants in the SEMSBA and Districts regional music festivals, and standout musicians selected both by peers and teachers. The Class of 2019 also presented Phaedre Sassano, the director of the orchestra, and Brian Cincotta, the director of the band, with gifts of gratitude. Freshman cellist Kalyna Wilkin noted that the gifts were “thoughtful” while also expressing her amazement at the level of musicianship on display at the concert. Wilkin was one of several deserving students who won a “Most Improved” award for their efforts in orchestra, and of all possible ways to end the program, honoring students such as her, who suggest a bright future for Hingham’s music programs, seems to be the most appropriate.

The following is a list of students who received awards at Tuesday’s concert:

Congratulations to all members of Hingham’s music programs, and goodbye and good luck to the seniors!