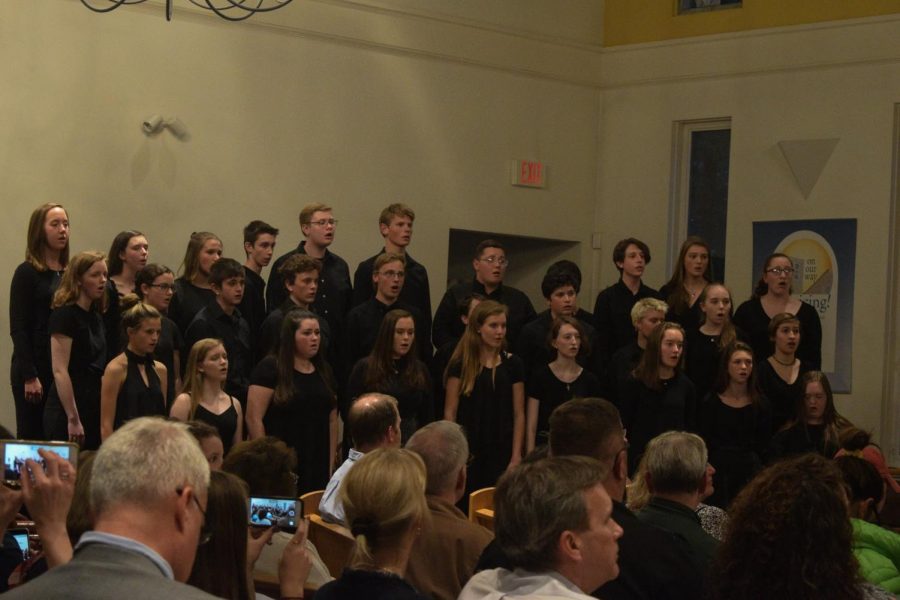 Concert Choral stood on the left side of the church when Mixed Chorus stood on the right and created an incredible performance of A hymn to the virgin by Britten.

Thursday, May 16th, brought an evening filled with the voices of the Hingham High School Chorus. On this night, the annual Major Works concert took place, demonstrating choral students’ years of dedication and practice. Chorus Director Dr. Joseph Young guided both under and upperclassman choirs to celebrate the art of the human voice and the evolution of music. Family and Loved ones gathered in the pews of House of Prayer Lutheran Church to hear this year’s highlighted historical British composer, Benjamin Britten in a concert titled “Across the Pond.”

“It is definitely one of my favorite concerts of the entire year!” explains Sophmore and Concert Choral member Connor Keliher, “ I just love being in a new space that is entirely different than a high school auditorium.” The audience was certainly was not expecting such a high level of musicality and presentation when entering the space. However, the group proved themselves as true musicians as their pristine vocals made this night one to remember.

The Concert was opened by Concert Choral, a choir made up of primary underclassman with the pieces For the Beauty of the Earth by John Rutter and The Sally Gardens arranged by Britten himself. Sally Gardens represented a beautiful blend of soft harmonies and featured solos from Sophmore Sydney Collins and Freshman Cameron Lumbard. Following this was Choral Spectrum, a selected group from the Mixed Chorus. Even though there are only seven members, the groups booming sound left the audience in awe as they performed Five Flower Songs by Britten.

The audience was eager to discover how this Major Works concert could be topped when Chamber Singers, a selected group from Concert Choral, graced the stage. They sang Imogen Holst’s, A Hymn to Christ that demonstrated the groups’ significant growth over the year, as both musicians and a chamber choir.

Then, Upperclassmen Choir, Mixed Chorus performed Hymn To Saint St. Cecilia by Britten, a piece that took over four months of preparation, making this the chorus’s longest time ever spent preparing for a performance. As the Audience witnessed this ten-minute performance, a look of astonishment brushed over everyone’s face.  “I hadn’t heard Mixed Chorus perform Hymn to Saint Cecilia before tonight, and to say I was blown away would be an understatement,” Sophmore Concert Choral member Genevra Donelly expressed her reaction to the group’s performance. The group performed the piece all acapella and will certainly go down as one of the best performances in Major Works history. The piece featured talented solos from Sophmore soprano Rachel Warhaftig, Junior alto Olivia Monarch, Sophmore bass Franco Cacciuttolo, and Senior tenor Shaun Collins.

Concert Choral returned to the stage to perform A Gaelic Blessing by John Rutter before Dr. Younge paused for chorus rewards and Senior recognition. This year was extra special as Junior tenor Nick Capodilupo, Junior soprano Olivia Barbuto, and Sophmore bass Franco Cacciuttolo were rewarded with All-state choir titles, the most in Hingham History. This was also a bittersweet moment for the beloved seniors as these were the final moments they would be singing together as a chorus.

The next performance was sung by a combined group of  Mixed Chorus and Concert Choral in a piece called A Hymn To The Virgin by Britten. Each choir stood on opposite sides of the church and in a way, called back to each other the words of the piece, creating a unique experience for the listeners.

To close off this night filled with milestones and music, Mixed Chorus performed their final piece, Britten’s Rejoice In The Lamb. It was beautifully sung behind the organ played by Frederick Macarther and featured solos from Senior soprano Molly Schwall, Junior alto Abby Meissner, Junior tenor Nick Capidilupo, and Junior bass Devan Kushnir. The contemporary 20th-century piece was the perfect way to close this night and leave the audience with a full representation of the talent in our school.

Dr. Younge showed the listeners that hard work and dedication does truly playoff as these students year-long development transformed them into talented performers. The choir urges new audience members to take part in this experience and witness for themselves the art of the human voice.