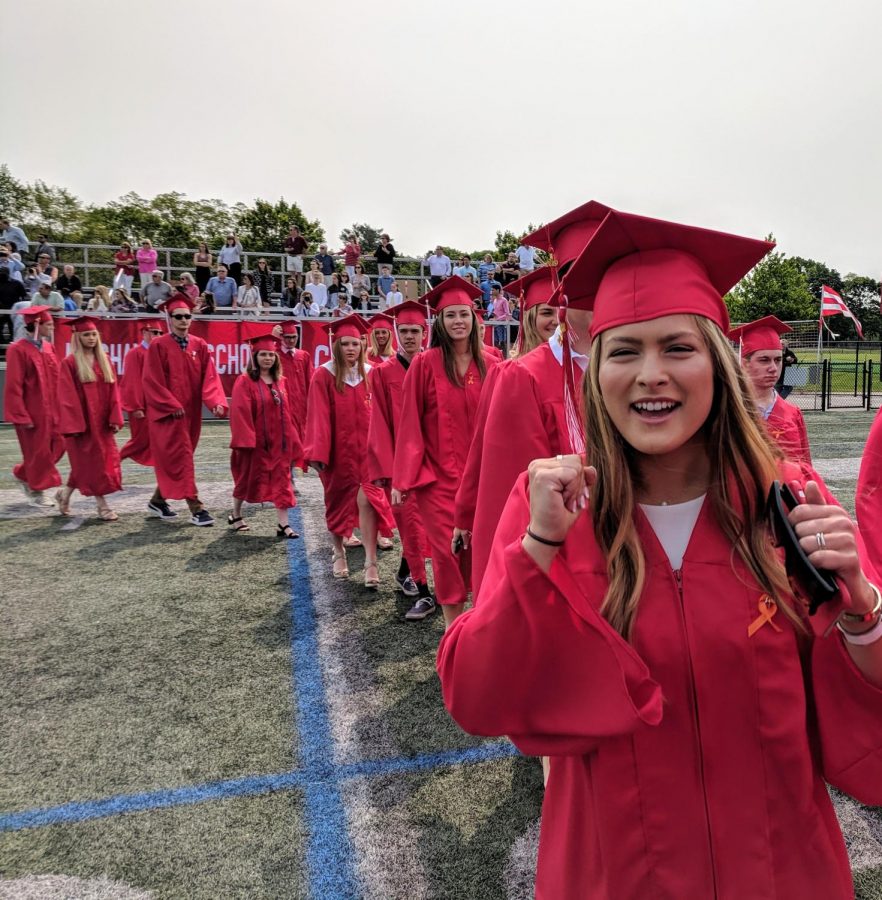 Lizzie Jacobson is psyched to walk out on the field Saturday morning.

The four vigorous years of homework, tests, and essays finally paid off for the graduating class of 2019 who received their high school diplomas June 1st, 2019. Parents and faculty looked out as a sea of red graduation gowns filled the Hingham football field as the school band played the traditional “Pomp and Circumstance.”

This was a proud moment for sophomore Declan Flynn who watched as his Brother Eamon Flynn received his diploma. “I am proud of what he has accomplished and hopefully, in 2 years, I will be standing in the same place receiving my own High School Degree” Declan said.

Once the seniors took their seats, Principal Swanson opened the event with a few words highlighting the student body’s determination and talent. He found a positive way to connect the school’s recent fire with the passion each student has for knowledge and intellectual growth, the “fire in their bellies” that they should never extinguish.

School Committee Head Michelle Ayer greeted the audience, thanking parents for their years of dedication to their newly graduated young adult. A parent herself, Ayer compared the fear parents have watching their child start kindergarten to the similar anxiety that accompanies watching their newly graduated child go off to college, the armed forces, or the work force.

Salutatorian Jess Carr used her infectious humor to share her high school battles with the podium. While she reminded her peers to keep perspective in regards to life challenges, she also quoted her older brother to emphasize that sometimes you have to “risk it to get the biscuit” in life, so you might as well dream big.

Following Jess was Valedictorian Anna Calame who spread the message of never letting go of your true ambitions; choosing a practical path in life is sensible, but you also want to work in something you love, so you might as well start with what brings you joy.

Senior “Class Dad” James Winikoff told his fellow graduates to “kick some butt” in the real world, not in a brutalizing way, but rather in a way that leaves an impression and makes your efforts count.

Finally, Senior Class President Billy Johnston stressed the importance of unity, both in school and in America. He hoped the divisiveness plaguing the country now would be temporary and a problem his classmates could resolve in the future.

After the speeches, students were called one by one to receive their diplomas. When all names were called, students ceremoniously moved the tassel from right to left, indicating their shift from student to graduate.

This day marked a new milestone for the Class of 2019 as they move away from the familiar halls of Hingham high school and off to a future that eagerly awaits them.