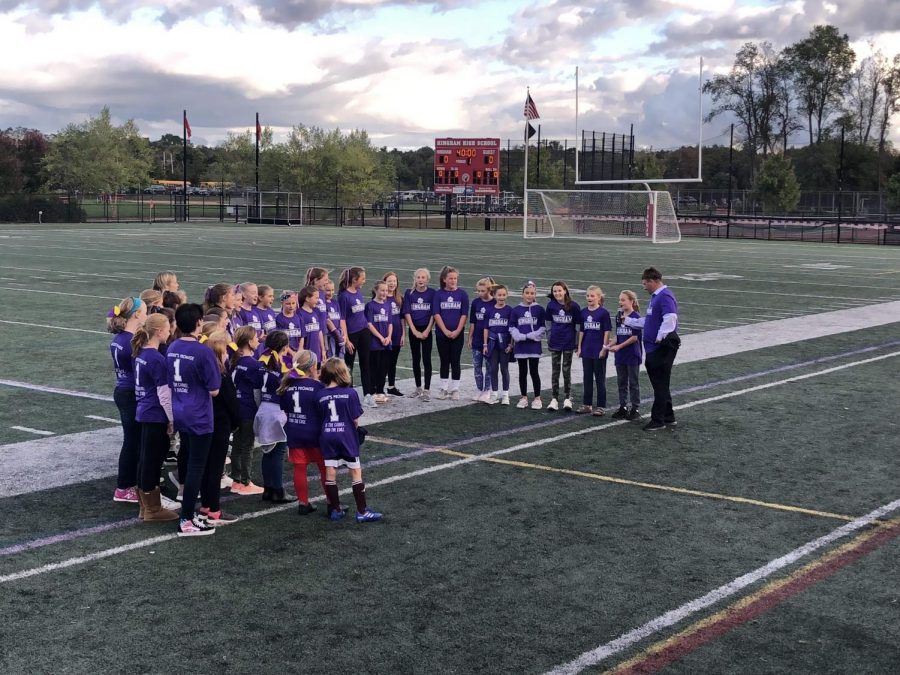 Maddie McCoy's friends from Plymouth River Elementary School and players from her team on Galway Rovers gathered to sing the national anthem at the start of each game.

On Friday, October 4, the Hingham High School Soccer Teams hosted a fundraiser for Maddie McCoy, an 11-year-old girl from Hingham who passed away last May due to a rare pediatric cancer. She attended Plymouth River Elementary School, and was a Hingham Youth Soccer player. In addition, she served as the Hingham Girls Soccer Team’s honorary Team Manager last year.

At the event, many booths were set up to raise money for childhood cancer research, and the stands were packed with Hingham fans wearing purple in support of Maddie’s Promise, an organization founded in Maddie’s name that aims to raise money for pediatric cancer. All high school soccer players also wore purple jerseys with Maddie’s name on the back. Plymouth South came out to our turf for both the boys’ and girls’ games. The boys’ varsity team played first, starting the game with a quick goal. By halftime, the score was three to zero, and the game ended with a Hingham victory, the score being six to one.

The girls’ game was up next, but first coach Puntiri first spoke a few words. He expressed his thankfulness to be a part of such an amazing cause and fundraiser and honored Maddie’s parents. Next, Stephen McCoy, Maddie’s father, gave his speech, thanking families for coming out and donating, and spreading awareness about pediatric cancer. McCoy shared that “only four percent of cancer research goes to pediatric cancers”, and encouraged Hingham fans to not only contribute to Maddie’s Promise, but also to spread awareness of pediatric cancers.

Many of Maddie’s friends then sang the national anthem before the game. The girls’ team started strong, similar to the boys, and had a commanding lead at halftime. The girls walked away with the second win of the night, and the final score was seven to zero.

A win for Hingham was very meaningful at this game. The teams not only proved their strength, but also raised $50,000 for Maddie’s Promise. Congratulations to both teams on their victories, and thank you to everyone who came out to watch the games and support Maddie’s Promise.