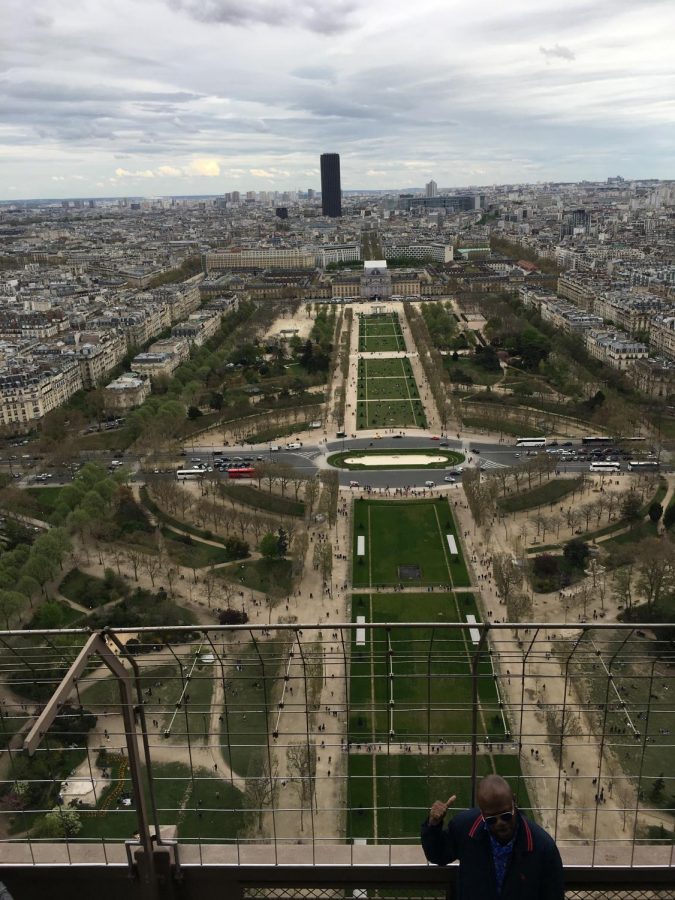 My view of the city of Paris from the top of the Eiffel Tower.

In 2018, I traveled to Paris, France, prepared to conduct research for my Global Citizenship Project by examining the ability of French media to freely participate in protests and contrasting it with the political divide in America that has hindered the ability of media to do so. However, my failure to consider the lasting effects of a pivotal event in the history of French media set me on a completely different path than I originally anticipated.

On January 7, 2015, two brothers managed to break into the offices of Charlie Hebdo, a popular French satirical newspaper, killing 12 journalists and injuring 11 others. The brothers, associated with the extremist group Al-Qaeda, were motivated by a pattern of published cartoons that they perceived to be culturally offensive, supposedly targeting the terrorist group and stereotyping their beliefs. This attack left more than just a mourning city- it left the French notion of journalistic nationalism crushed.

As an increasingly multicultural nation, French journalists and reporters have always struggled to appropriately appeal to all cultural audiences without offending these groups. Especially in the diverse city of Paris, producing satirical publications is risky. Although controversy has arisen over certain publications in Paris, the role of the media has rarely been placed at the forefront of politics as it has in recent years in America.

In the American media, the term “fake news” has led to significant political controversy, and in the past few years, has moved to the forefront of politics. This association is rooted in political division, as publications have been known to lean towards one side of the political spectrum when reporting on the state of politics, leading to backlash from the other side. Despite this constant focus on the “wrongdoings” of the media, the media continues to get involved in nearly every notable event nationally.

Under the United States Constitution’s 1st Amendment, the freedom of the press is protected by the government. Such a right allows for United States publications to publish whatever they may wish, allowing for any publication to interpret events in its own manner. In the increasingly divided political climate in the United States, this right has been debated as claims to some of these publications publishing biased or fake articles surface. President Donald Trump has been a particularly active in making these claims, frequently labeling news articles as “fake.” Such accusations have led to even more of a political divide, which unfortunately resulted in an attack on one such publication in July of 2018. At the Capital Gazette in Annapolis, Maryland, a shooter with the intention of killing every journalist at the publication fatally shot 5 reporters. His motives were later revealed to be his dislike of the publication’s liberal bias.

Nevertheless, the media persisted and continues to cover national events with this freedom.

Without official documentation confirming the protection of the freedom of the press in France, the right has been treated as somewhat of a “given.” However, the issue arising from “freedom of the press” in France is rooted not in political divide, but in the multicultural divide. The attacks on Charlie Hebdo were motivated by cultural misunderstanding. However, the satirical outlet used this assumed right to poke fun at serious issues, which consequently led to the attacks. Without a definitive law establishing the freedom of the press, recovery from such an attack is a more difficult process than it would be in America.

The Charlie Hebdo attacks resulted in the withdrawl of media from a variety of protests. Previously, media outlets covered nearly all protests. This attack halted these efforts, frightening journalists and reporters about crossing the multicultural boundaries that led to the attacks. As a result, media outlets suddenly disappeared from the political scene, and remain in a state of recovery today after the devastating attacks on this unsaid freedom.

The right to freedom of the press is by no means guaranteed in France. However, it is an assumption of any free nation that this right may be available to the press.

Because of the lack of defined freedom of the press engrained in the very legislation that mandates the country’s policies, the French media remains in a state of recovery. Unsure of how to respond to certain situations, the media feels hindered by the threat of attack on the freedom of speech in content, as any work could potentially be perceived as an attack on one of the cultures that makes France such a multicultural nation.

This article is the first part of a five part series that will be featured on the Harborlight during the 2019-2020 school year and will serve as the “Creative Exploration” requirement for the GCP Portfolio.