A Series of Tornadoes Plow Through Texas 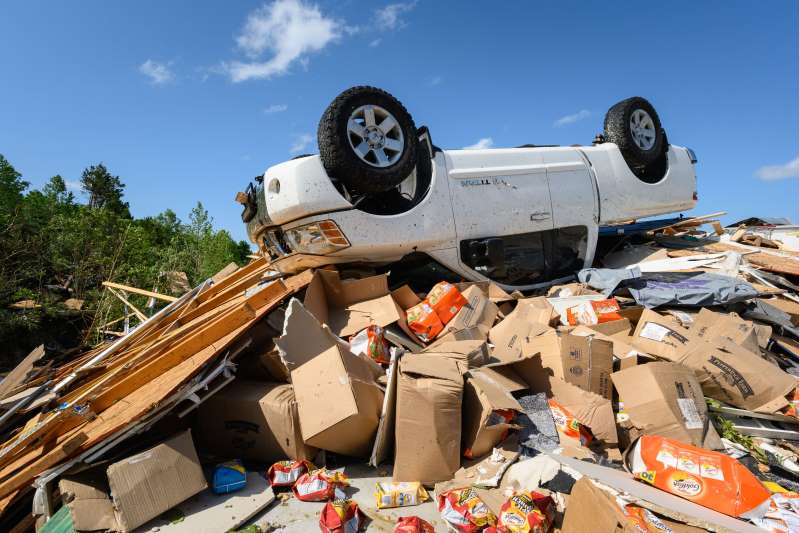 Donnie Braun and Sons Auto Repair in Jefferson City, Missouri is destroyed after a tornado hit the area.

Last Sunday, a tornado plowed through Dallas, Texas, destroying numerous houses and buildings. The winds exceeded 140 mph and the tornado was categorized as an EF-3 (Enhanced Fujita scale). Luckily, no fatalities were recorded and only six people were hospitalized for non-life threatening injuries.

According to city officials, if the tornado had hit during rush hour in Dallas, more problems would have risen since the storm stampeded through two intersections. Tornadoes rarely hit cities because they don’t have a big tornado footprint, but when they do hit cities, many fatalities are usually recorded. However, many civilians received adequate warnings and followed sheltering procedures. Tons of people were packed in the Dallas Cowboys Stadium and could have been injured, but luckily, the storm avoided the stadium.

Recently, when Hingham High School student Alex Denning was on her way home from North Carolina, she witnessed a tornado while in her ca. Although her car was not near the storm, the visibility was very bad due to the strong wind and heavy rain. According to Denning, “This moment was definitely one of the scariest moments of [her] life.”

Throughout Monday and Tuesday, 6 more tornadoes hit Northern Texas, yet no one was seriously injured or killed. Power was restored to almost all of the 130,000 who initially lost power from the storms early in the week.

However, the storm continued to plow through Arkansas and Oklahoma, and unfortunately, one fatality was recorded. For the whole week, many schools were cancelled in all three states affected by tornadoes because of the destruction from the storm, but cleanup and recovery is taking place.

When Hingham High School student Sadie Burm was young, she experienced multiple tropical storms, and can relate to those who experienced such strong storms this past week. Since Burm lives near a beach, the winds are much stronger, causing more damage to take place. Burm recalls, “one time my beach was flooded, and the roof of a storage shack was blown off. Also, a few trees fell down, damaging the area even more.”

The Texas tornadoes caused lots of damage to buildings and people, and many are still recovering from the destruction. As Texas continues to recover, many schools and businesses are beginning to reopen. However, due to the high number of severe weather disruptions that have occurred this year alone, the region could always be affected by other natural disasters at any point in time.