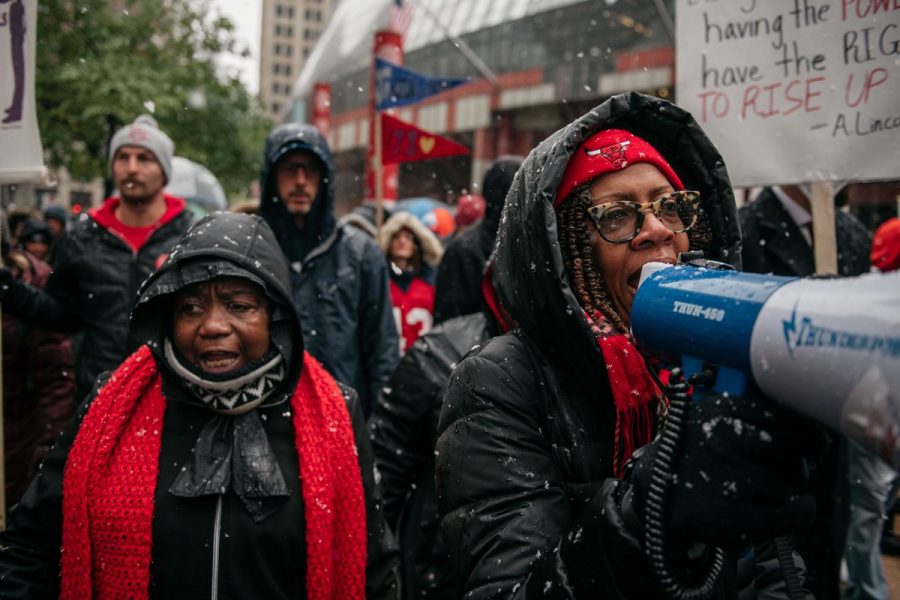 Strikers gather in downtown Chicago, Illinois on Thursday, October 17. About 25,000 teachers took part in the 11-day strike, which they pitched as a fight for equity in a city which has long struggled fiscally.

On Friday, more than 300,000 Chicago students returned to school after an 11-day strike turned life upside down in the district, the third-largest in the nation, and left new mayor Lori Lightfoot struggling to resolve her most serious problem yet.

The strike, which involved 25,000 teachers, appeared to have mixed results. In a deal estimated to cost half a billion dollars, the city agreed to cap class sizes, pay for hundreds more social workers, nurses and librarians, and to increase teacher salaries by 16% over the coming five years. Yet even so, many teachers were left unsatisfied by the agreement, and the vote to accept the deal was noticeably split.

Jesse Sharkey, the president of the Chicago Teachers Union, explained in a press conference that “we feel like we achieved a lot of things… There’s some things we didn’t achieve. But it’s not a day for photo ops.”

Even so, the strike is a momentous demonstration of Chicago teachers’ renewed sense of activism. Stretching nearly two weeks, it was the longest strike since 1987, and seems to have been inspired by a recent series of teacher walkouts in West Virginia, Oklahoma, Los Angeles, and Denver. Additionally, teachers drew attention to matters beyond salary, pitching the strike as a fight for equity and safety on behalf of their students.

The strike also has political significance, as it was the most daunting challenge Lightfoot has faced in office to date. A political novice, she is only five months into her first term as mayor, and while she has positioned herself as an eager reformer, the strikes have pitted her against Chicago Public Schools teachers. Many have spoken of her critically, saying that she has been unable to keep her promises.

Perhaps most importantly, the strikes have had a tremendous impact on the lives of Chicago’s students and families. Elizabeth M., a sophomore at a high school just outside the city, explained that “it’s been difficult for families to organize childcare, especially for families with younger kids. The atmosphere of uncertainty has been really stressful for a lot of people.”

Within Hingham, news of the strikes has earned support from some students and dissent from others. Sophomore Mimi Jiang-Yu empathized with Chicago’s teachers, saying “the low wages for teachers… show the flaws in the education system.” Conversely, sophomore Ella Niehoff argued that “although these teachers may feel as if they are supporting a good cause, the teachers are not thinking of the students they are harming.”

Regardless, the strike’s importance is undeniable, as is the benefit of having students back in school. And while Chicago Public Schools almost certainly will continue to face fiscal struggles, the compromises made during the strike are an encouraging step forward. As Lightfoot said, “It was a hard-fought discussion, took us a lot of time to get there. But I think this is the right thing ultimately for our city. And I’m glad this phase is over.”