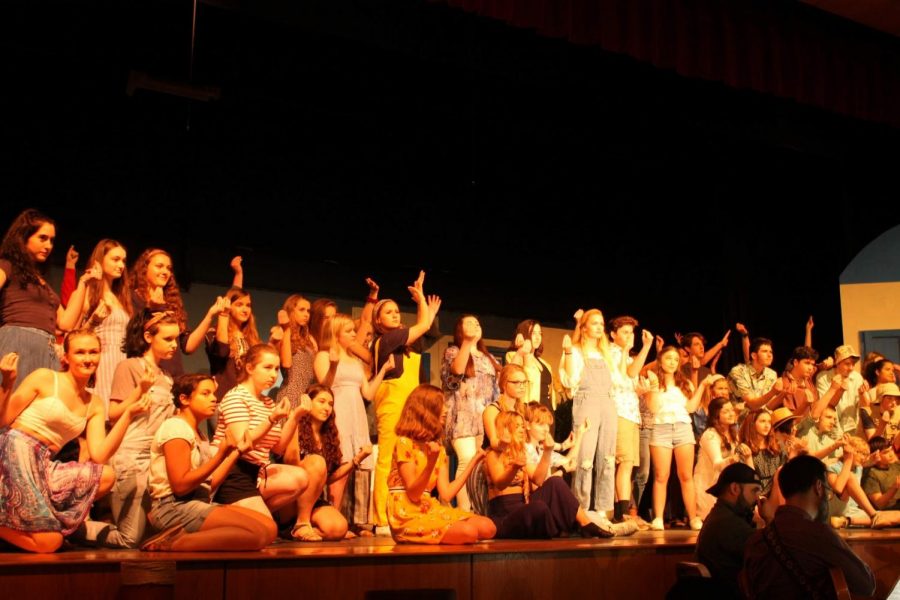 On Thursday, Friday, and Saturday, Hingham High School’s Drama Club put on a production of the musical hit “Mama Mia!” The show was a huge hit, selling out online before the in-school sales even began. On Thursday morning, all tickets sold out, making “Mama Mia!” one of three shows in Hingham High School history to sell out. The abundance in ticket sales was well deserved as every member of the cast, crew, and staff put on an incredible show that delighted its audience.

Most know that “Mama Mia!” is a “jukebox musical,” where every song is from the same band with the story formatted around the songs. Though each song was entertaining to watch, some stood out as exceptional. “Honey, Honey” featuring Kate Schembri, Lizzy Ford, and Elle Cavanaugh was exceptional. “Thank You For The Music” was also a phenomenal number, setting up the relationship between Sophie and her three potential dads. “Mama Mia,” as the show’s title number, was one of the best songs in the play, featuring the entire cast. Furthermore, “Voulez Vous” was a show-stopping final number in the first act, once again, featuring the whole cast. The lead dancers in this number shined with fantastic choreography. Act 2 opened with “Under Attack,” which featured a comical nightmare scene. Junior Kate Schembri described this number as her favorite part of the play. She stated, “My favorite by far is the nightmare scene at the beginning of act two. We had this massive bed sheet that we used as a veil.” She further elaborated, saying, “Also, Aidan Murphy comes out in a wedding gown. That is something that you should not miss.” Finally, “Does Your Mother Know” was also a very entertaining number, featuring Junior Benton Perry and Senior Morgan Willison. It was incredibly entertaining and both soloists offered incredible performances.

Kate Schembri expanded on how theater and drama club has impacted her life. She stated proudly, “Theater has been where I have met all of my best friends, and its a great place where people have common interests. It is a supportive community. I just think the arts are a great place to be.”

Ms. Levy Sisk, the drama teacher and director of the show, described some of the obstacles that the cast overcame during rehearsals, reflecting, “I think in a show where so many people came out to be in our cast because we take everyone, the biggest challenge ends up being, how to find enough room on stage and still let them excel and look good.” She explains that she solved this by “being creative with movement and placement and how you use the setting and trying to make sure you are giving the audience a variety of things to watch.” This worked well, as every number was interesting and featured strong choreography. The set was also beautiful and transitions between scenes were seamless.

“Mama Mia!” was a joy to watch and equally as fun for those involved. Congratulations to the Drama Club on producing an excellent Fall Musical!