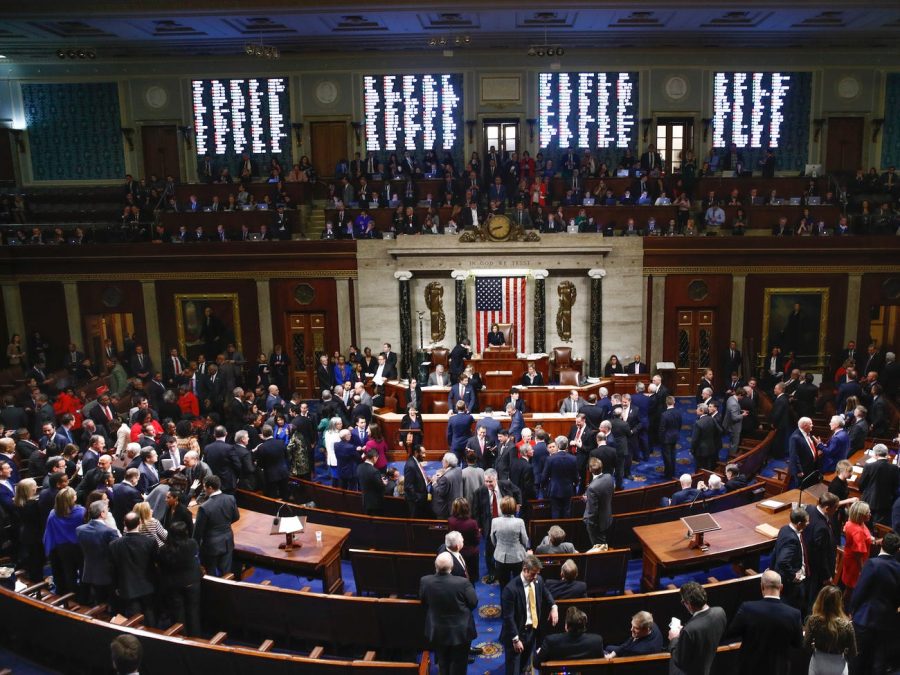 The House of Representatives impeached President Trump last Wednesday, December 18, 2019 on two accounts: Abuse of Power and Obstruction of Congress.

On Wednesday, December 19, the 45th President of the United States of America, Donald Trump, was impeached. After the House of Representatives voted that President Trump violated both impeachment articles, he became the third president in U.S. history, alongside Andrew Johnson and Bill Clinton, to have been impeached. So, how did this happen? What does it mean? And, what comes next?

The House of Representatives first impeached the President for abuse of power. The House voted that President Trump’s quid pro quo with Ukraine was a violation of power because he was using his position for political gain.

Back in July 2019, on a phone call with Ukraine’s President Zelensky, Trump instigated a quid pro quo when he asked President Zelensky to initiate an investigation into the former vice president and now leading democratic candidate for the 2020 election, Joe Biden. For leverage, Trump withheld $400 million of military aid from Ukraine.

What Trump wanted was information on Biden’s activity in Ukraine in 2016. At that time, Biden had pressured the Ukranian government into firing then Prosecutor General, Viktor Shokin–who Biden and many other Western Leaders believed was corrupt–by withholding more than a $1 billion loan. At the time, Biden’s son, Hunter Biden, had been working on the Ukrainian Energy Board, Burisma Holdings. In May 2019, the New York Times published an article that connected Biden pressuring of Ukranian leaders to dismiss Shokin to the fact that Shokin had been investigating Burisma Holdings. This conflict of interest from 2016 could potentially be a key factor in defeating Biden in the 2020 presidential race, so Trump sought out after this information, but in an illegal–and soon to be impeachable–way.

A month later in August, a whistleblower, an anonymous CIA officer, filed a complaint to Intelligence Community Inspector General Michael Atkinson reporting that Trump had used the $400 million in military aid as leverage to gain information for personal and political gain. Atkinson later confirmed this, alarming many.

In September, a rough transcript of the phone call between President Zelensky and President Trump was released. Along with this, the whistleblower complaint became public. Speaker of the House Nancy Pelosi announced she supported an impeachment inquiry and began the process to decide whether Trump’s quid pro quo was an impeachable offense.

As the investigation continued into October and November, Trump coerced his top aides to refrain from testifying, obstructing the congressional subpoenas.

By December, The House Intelligence Committee shared its findings from the inquiry and decided on two articles of impeachment. This past Wednesday, the House voted on each article.

Sophomore Lexi Nolan kept up to date with the impeachment. She commented, “the government has a responsibility to uphold the values of our constitution. If we allow a president to stay in office after several blatant abuses of power once, that’s the first crack in the downfall of our democracy.” Along with Nolan, 49% of American citizens supported an impeachment (Washington Post).

So is Trump still President? Yes–he has only been impeached by the House. In order to be removed from office, Trump will now face the Senate trial. Speaker Pelosi has decided to refrain from choosing Impeachment Managers (the Representatives who will prosecute) and sending the articles of impeachment to the Senate until “we see the process set forth in the Senate” and “we see the area in which we will participating.”

This created much backlash among Republicans. President Trump tweeted, “So after the Democrats gave me no Due Process in the House, no lawyers, no witnesses, no nothing, they now want to tell the Senate how to run their trial. Actually, they have zero proof of anything, they will never even show up. They want out. I want an immediate trial!”

Senate Majority Leader Mitch McConnell also commented on the matter, saying “looks like the prosecutors [House of Representatives Impeachment Managers] are getting cold feet in front of the entire country and second-guessing whether they even want to go to trial.”

Because of all this, the trial will likely be held in January (NBC News). With senators acting as jurors, Chief Justice Roberts presiding over it, and House representatives performing as prosecutors, they will decide whether Trump’s impeachment calls for removal from office. For this to happen, there will have to be a ⅔ majority vote. There are 53 Republicans, 45 Democrats, and 2 Independents in the Senate. This makeup will most likely call for Trump’s acquittal, rather than removal, considering how unified the House of Representatives’ Republicans were (0 Republican representatives voted for impeachment) and how supportive the Republican senators are of President Trump (Washington Post.) 20 Republican senators, along with all Democrat and Independent senators, would need to vote for removal in order for Trump to leave office. According to the Washington Post, only 14 Republican senators seem to be skeptical of Trump’s actions regarding Ukraine, and only three regularly speak out against him (Washington Post).

Though President Trump will most likely remain in office, similar to how Andrew Johnson and Bill Clinton’s trials ended, the impeachment marks a historic stain on President Trump’s legacy.

Sophomore Morgan Hurley remarked, “Trump’s impeachment isn’t the Pats[New England Patriots Football Team] winning another Super Bowl…It’s an extremely historic moment in American history.” She added, “Too bad we can’t get the duck boats rolling for this though.”

Whether you agree with Nolan and Hurley and support Trump’s impeachment, or you would rather see Trump acquitted, this entire investigation has reinforced the values of the constitution and the morals our nation was built on. Our founding fathers included Checks and Balances for this very reason, and it continues to be vital in preserving the integrity of our democracy. As Speaker Pelosi said, in this country, “No one is above the law”–not even the President.