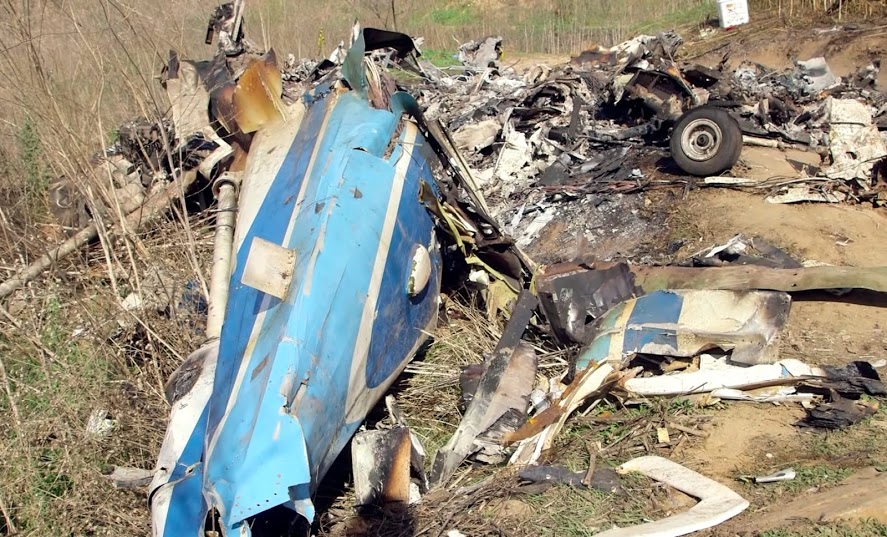 This image taken from video on Monday, Jan. 27, 2020, and provided by the National Transportation Safety Board, shows part of the wreckage of a helicopter crash near Calabasas, Calif. The Sunday, Jan. 26 crash killed former NBA basketball player Kobe Bryant, his 13-year-old daughter, Gianna, and seven others.

On January 26, 2020, the United States sports community lost a memorable figure. Kobe Bryant, aged 41, his thirteen-year-old daughter Gianna, and seven other lives were lost in a helicopter crash in Calabasas, California. The helicopter was scheduled to arrive at Mamba Sports Academy for a travel basketball game. The helicopter reportedly flew into dense fog and lost control after descending at over 2000 feet per minute.

Kobe Bryant was drafted by the Hornets in 1996 after a successful high school career at Lower Merion High School; he was generally accepted as the best high school basketball player at his time. After being traded to the Lakers before the season started, Bryant spent all 20 of his NBA years with the Lakers. He won the NBA Championship five times, made the All Star team 15 times, and was on the Olympic team in 2008 and 2012.

The “Black Mamba” was the youngest player ever to reach 30,000 career points, and holds the 4th greatest all time amount of career points in the NBA. He retired in 2016 after dealing with several injuries. He is widely accepted as one of the greatest basketball players of all time.

Bryant’s death brought empathetic responses across all sports, including a moment of silence at the Super Bowl, a commemoration of his jersey at the Laker’s game, and even Tony Finau, the runner up of the Waste Management Phoenix Open golf tournament in Phoenix, Arizona, wore a Kobe jersey three of his four rounds on the famed 17th hole, bringing large cheers from the crowd.

The National Transportation Security Board (NTSB) is launching an investigation into the death, including double checking the pilot’s background records, weather conditions, and other leads. A preliminary report has been released, but the full report will not be available for the next year. However, The New York Times reported that the helicopter’s charter company has shown to have cut corners concerning safety in the past. This was evident especially in 2009, when the company asked the FAA to replace an agent who had pushed the company to adopt greater safety policies, to which the FAA complied. The company is under new ownership from the 2009 crash.

The crash on the hillside caused a wildfire, which prevented authorities from reaching the scene of the accident until it had been contained. The released victim report includes Kobe Bryant, 41; Gianna Bryant, 13; Payton Chester, 13; Sarah Chester, 45; Alyssa Altobelli, 14; Keri Altobelli, 46; John Altobelli, 56; Christina Mauser, 38; and the helicopter’s pilot, Ara Zobayan, 50.

Several members of the crash have Massachusetts ties, especially to the sports communities on Cape Cod.The Harborlight wishes the families of those lost in the crash their solemn condolences.