Where do the Democratic Candidates Stand on the Major Issues? 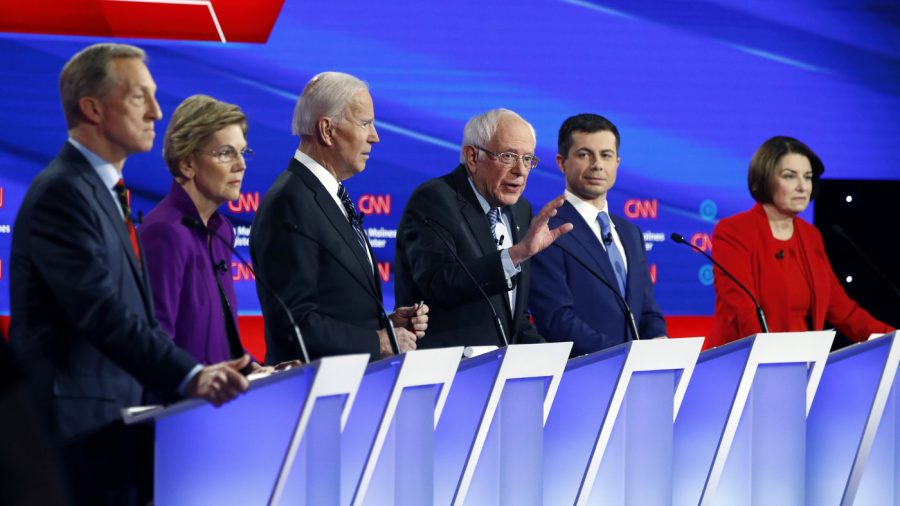 The democratic candidates stand on the debate stage.

With Super Tuesday just days away, many Hingham High School seniors will get the chance to exercise their right to vote for the first time. With so many Democratic candidates on the debate stage, it can be difficult to separate where each candidate stands on the major issues facing the nation. If you are a senior who is still undecided on who to vote for, hopefully, this information can help you figure out whose policies you most strongly agree with. The topics that will be covered are healthcare, foreign policy, immigration, economics, gun control, climate change, and education.

Joe Biden: Biden rejects a Medicare For All system and instead wishes to build upon the Obama Administration’s idea of the Affordable Care Act. His campaign states that his goal is to ensure more than 97% of Americans. He wants to create a public option, similar to Medicare. He plans to do this by increasing taxes to lower premiums and extend coverage to all Americans. He seeks to protect the middle class by giving them a premium to help them pay for coverage. He wants to eliminate the pharmaceutical companies’ hold on America’s current healthcare system.

Michael Bloomberg: Bloomberg feels as though a public option would be beneficial. He plans to expand Medicare and Obamacare. His campaign cites his experience as New York’s mayor and how the health of New York improved under his leadership. As Bloomberg is a new candidate, he does not have a very developed healthcare plan and is relying on his past experience in the topic.

Bernie Sanders: Sander’s healthcare policy is far more radical than the other candidates. Sanders’ campaign website says he will guarantee free healthcare to all people “as a right, not a privilege through a Medicare-for-all, single-payer program”. He feels as though private insurance is not a good plan and it forces the American Public to spend billions of dollars on healthcare bills.

Elizabeth Warren: Warren co-developed the Medicare For All Act of 2019. Her senate website states, “The Medicare for All Act of 2019 would ensure that Americans could get the care they need, when they need it, without going into debt.” She believes that healthcare is a human right that should be accessible to all. Her plan also gives the government the power to negotiate with drug companies over prices.

Keywords: Public plan, Medicare for All

On the issue of healthcare, senior Harriet Wiley states, “I like the idea of healthcare for all since I feel strongly about providing affordable healthcare to the whole population, and while I know that several other candidates advocate for similar programs, I believe Bernie has the ability to implement it”.

Michael Bloomberg: Bloomberg states that he is very pro-immigration. He believes that immigrants help the economy and will create plans to support them in starting their own businesses.

Bernie Sanders: Sanders believes in creating a better citizenship pathway. He wants it to be easy for refugees to be able to enter the country. His goal is to create a cruelty-free immigration policy.

Elizabeth Warren: Warren’s goal is to clean up the mess, as she calls it, that the Trump administration created at the border. She has created a six-point proposal on how to fix the immigration crisis. The plan goes as follows; eliminating abusive immigration enforcement, reduce immigration detention, provide rights to people in immigration courts, welcome those in need of asylum, grow legal immigration and make a fair path to citizenship, and to address the problems in the home countries of the migrants.

Keyword: planned out, cleaning and fixing

Joe Biden: Biden states that he will hold manufacturers responsible. He will ban the sale of assault weapons and high capacity magazines. He wants to require background checks. Set out a campaign against online threats and cyberbullying as they relate to guns.

Michael Bloomberg: For Bloomberg, gun violence is his top priority. He wants to create a better background check system, keep guns out of the hands of dangerous people, protect schools, tackle daily gun violence in low-income communities, and confront the NRA and the gun industry.

Bernie Sanders: Sanders wants to take on the NRA and its influence on Washington. He wants to expand background checks. He also wants to ban the sale of assault firearms.

Elizabeth Warren: Warren claims that she will pass anti-corruption legislation to eliminate the NRA’s hold on Congress. Her goal is to eliminate gun violence from this nation.

Joe Biden: Biden believes in leading by example. By 2050 he wants the US to have a 100% clean energy economy. He wants to create a resilient nation that can survive climate change. He strives to eliminate pollution

Michael Bloomberg: Bloomberg would immediately rejoin the Paris Climate Accord. He would make climate change the top foreign policy priority for him. He wants to provide national security to protect America against Climate Change.

Bernie Sanders: Sanders believes that Climate Change is the biggest threat facing our nation. He wants to instate the Green New Deal. He has many plans on how to combat climate change.

Elizabeth Warren: Warren supports the Green New Deal. She believes that climate change is a big threat to this nation.

Joe Biden: Biden looks to support educators by giving them the respect they deserve.

Michael Bloomberg: Bloomberg cites his experience as mayor as to how he will deal with education.

Elizabeth Warren: Warren’s plan will cancel the student loan debt for most students. She will eliminate tuition costs for two to four-year colleges. She will also increase funding to historically black and Latino schools.