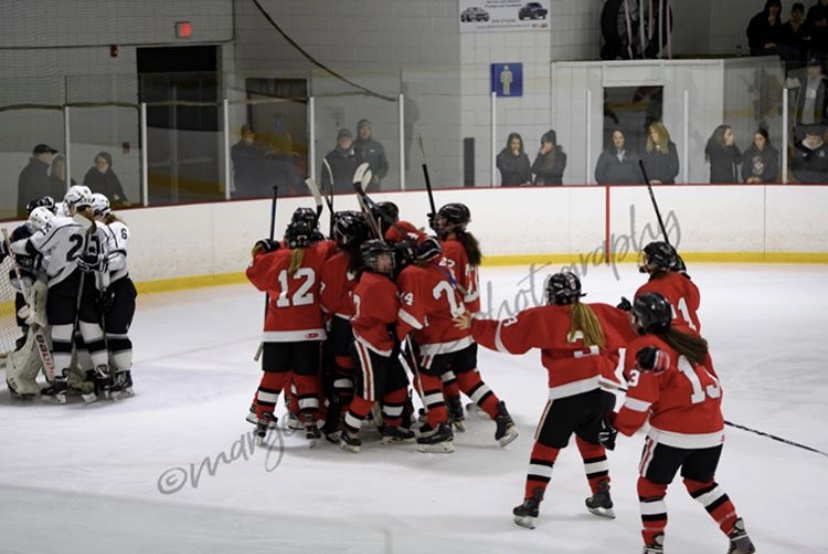 The Harborwomen storm the ice after upsetting the #1 seeded HPNA hockey team.

On Wednesday, February 26, the Harborwomen made Division I MIAA Girls Hockey Tournament history by defeating a #1 seed while being seeded last at #32. The Harborwomen faced the HPNA (Haverhill-Pentucket-North Andover) powerhouse team at Haverhill’s Veteran Memorial Skating Arena, bringing their A-game to the ice and making the 31-seed gap between the teams seem nearly invisible.

However, the Harborwomen refused to give in to the #1 team. Senior goalkeeper Taylor Moynihan saved three shots from HPNA players at the beginning of the period, preventing the team from advancing their lead. After some back and forth play, Sophomore Kathryn Karo scored, brining the game to 3-3. However, 13 seconds later, HPNA took the lead again, bringing the score to 4-3 at the end of the second period.

During the third period, Sophomore Kathryn Karo once again scored, tying the game at 4-4, and sending the game into sudden death overtime. In the nail-biting final minutes, the game was set to four-on-four, and 1:54 into the game and after a scramble at the HPNA net, freshman Piper Jordan scored, officially securing the win for the Harborwomen.

After the upset, Hingham players and fans immediately celebrated. Senior Mary Maffei reflected, “we stormed the ice screaming our heads off and jumping.” She adds, “it was awesome.”

Since moving on in the tournament depended on this game, this win was especially sentimental for Harborwomen seniors, who initially predicted that this match would likely be their last time on the ice in a Hingham jersey. Senior captain Katherine McNally reflects, “storming the ice after we scored the winning goal was the most amazing feeling ever. Every one of us could not contain our emotions.” She adds, “being a senior, this was the perfect experience to wrap up my hockey career.”

After upsetting the #1 team, the Harborwomen unfortunately were defeated by Duxbury in the next round. McNally shares, “although we lost against Duxbury the following game, winning against the #1 seed while we were in last at #32 was irreplaceable.” Nevertheless, the Harborwomen had an incredible season, and despite not progressing in the tournament after playing rival Duxbury, proved that the team will be a force to reckon with next year.