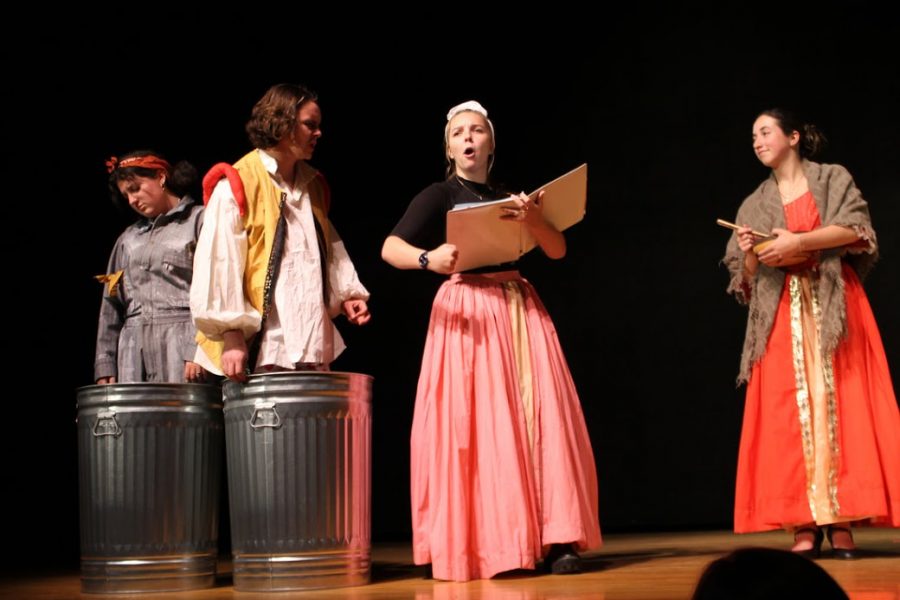 While Senior Lizzy Ford's character doses off, Senior Peyton Semjen and Senior Morgan Willison's characters drag Junior Benton Perry into a scene from "A Man for All Seasons" where the executioner will kill him.

George Spelvin (played by Junior Benton Perry) may have wanted to leave his nightmare of a play behind, but the cast and crew of HHS’s The Actor’s Nightmare certainly are not ready to say goodbye to this play!

Every winter, Hingham High’s Drama Club rehearses a one-act play to perform at the Massachusetts Educational Theatre Guild’s High School Festival. This past Saturday marked the first day of the annual Festival with the Preliminary Rounds. Across the state, 112 schools competed, but only 42 schools were selected to move onto the Semi-Finals.

At 6:30 a.m., Hingham High’s Drama club headed south to Bourne High School. After settling in and sharing words of motivation, the cast and crew headed to the auditorium, where they watched the first performance of the day: Wareham’s production of Almost, Maine.

Junior Evelyn Steiner, who worked as one of the Backstage Crew Heads this winter, commented, “I think Wareham did an amazing job putting their show on. I really loved the different dynamics of all the relationships. The story was really sweet and cute.”

After Almost, Maine, Hingham prepared for their show which would follow Upper Cape Tech. In the hour of allotted preparatory time, the cast changed and rehearsed, the costume crew helped with any quick fixes, the makeup crew applied makeup, the backstage crew transported the set into the wings, the props crew organized the props, the lights and sound crews prepared their queues, and the assistant director answered last-minute questions.

The cast and crew headed backstage for an 11:15 start. After a speedy set up executed by the backstage crew, the curtain opened as the sound crew generated the sound of a car crash and the lights crew focussed the lights on junior Benton Perry. The show followed Perry’s character, George, through a series of disastrous yet hilarious scenes where his confused character struggled to understand the play he suddenly finds himself in. Along with the clever and amusing lines and delivery of senior Lizzy Ford, junior Nathan Lavoie, senior Peyton Semjen, and senior Morgan Willison, both Perry’s verbal and physical humor impressed the audience.

The next performance came from Rising Tide Charter School. They performed a touching and moving show, Same Room, Different Story that centered around four different stories all taking place in the same room. Afterward, the show sequence took a break for lunch.

Back from lunch, the host school Bourne presented their show, The Effect of Gamma Rays On Man-In-The-Moon Marigolds. This show, which fascinated the audience from the start with its unbelievable set, showcased the troubling home situation of a young aspiring scientist with an abusive mother, a narcissistic sister, and an elderly “Nanny.” Junior Nathan Lavoie, when asked about the show, commented, “The Effect of Gamma Rays On Man-In-The-Moon Marigolds was a very impactful show for me. Some things they talked about hit home, and I related to some of their issues within the show. The people at Bourne were amazing and so humble, and their show proved that 100%.”

Sophomore Kate Schembri added, “It was so moving and the actors did an incredible job bringing us into their world. I thought nothing else could possibly compare to Bourne’s Broadway-like production, but then Brockton performed The Skinflint of Shickshinney. A completely different storyline and tone, but just as impressive!”

Brockton’s show wowed everyone from the beginning. Their set included a two-story house complete with a wrap-around porch and a lattice structure that allowed actors to climb onto the roof. Schembri raved, “it was absolutely one of the best plays I’ve seen. It could be straight from Broadway! It was insane.”

Later at the group discussions, the six schools all marveled over each other’s performances. Along with all the compliments, the group discussion opened much conversation on the numerous creative choices both from the actors and tech that shaped the productions so well.

After the judges presented all the individual awards, they revealed which schools would be moving onto the Semi-Finals. Brockton’s The Skinflint of Shickshinney, Bourne’s The Effect of Gamma Rays On Man-In-The-Moon Marigolds, and Hingham’s The Actor’s Nightmare were selected to compete at Semi-Finals.

The Drama Club is ecstatic–rightfully so! Not only is it an impressive feat to move onto Semi-Finals, but none of the current thespians have ever made it to Semi-Finals, as the last time Hingham advanced was in 2016.

Junior Will Maxwell shared, “rehearsing the show this year was a very educational process for me as an understudy, and watching the actors work so hard each day made the experience even more rewarding!”

Junior Benton Perry continued, “it feels so good to be recognized for the hard work we put into our show by so many individuals, and the feeling of ecstasy I got when I heard we would move on to Semi-Finals was so worth taking my pants off on stage in front of the entire high school!”

Hingham will be performing at Joseph Case High School in Swansea, MA at 11:30 a.m. on March 14! For more information, visit the METG Festival page!

In the meantime, go show your support for the most dramatic team around! Let’s go Hingham Drama!