Online and Shortened: The Story of the Changed AP Exams 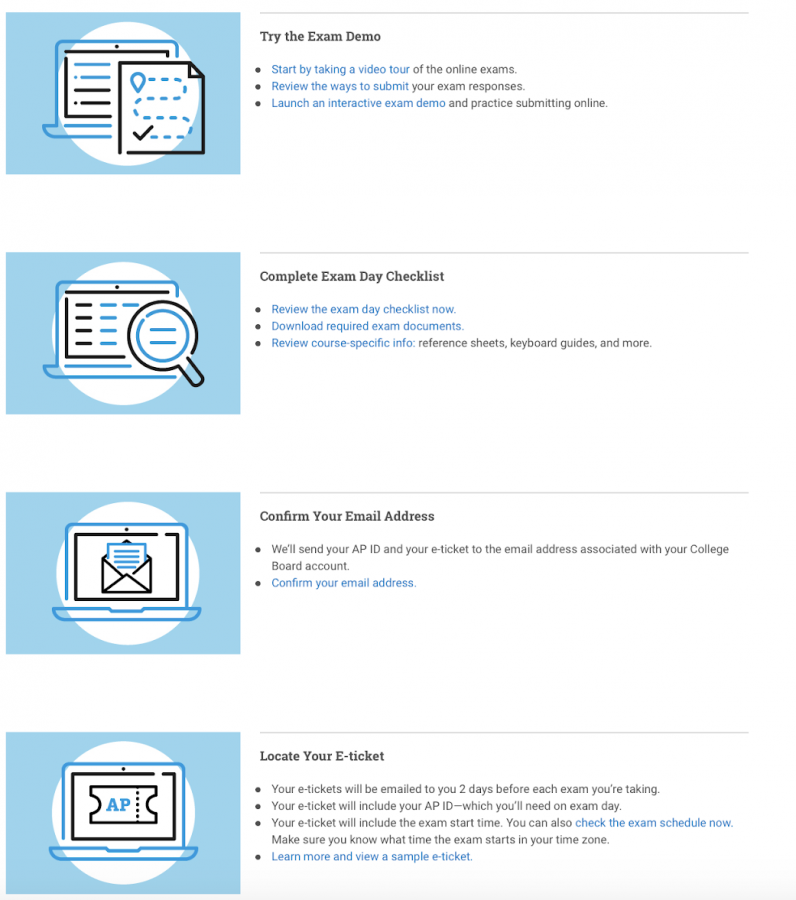 Although the at-home AP exam and classes, the College Board maintained a structured checklist and schedule. This was backed by an Exam Demo, allowing students to get a taste for the new testing experience and Youtube videos, announcing changes, and reviewing material on several courses.

With the cancellation of in-school classes due to the coronavirus, most schools had to quickly find a solution to resume classes and learning. The solution has varied from Zoom classes, posting work on forums such as Google Classroom, Edmodo, Edpuzzle, Quizizz, and others. However, the College Board, the organization that offers AP Exams,

The College Board found themselves in a very precarious situation because they had to find some solution to the AP Exams. Offered to high school students, AP classes are college-level courses that have an accelerated program and end with a final exam, usually recommended for high-level students. The AP Exam score is an important piece of a student’s transcript, as it provides important information as to how the student will perform in the college’s courses. As a result, the choice to remove such a score from a student’s transcript would have been detrimental to the student’s admission and unfair when compared to previous years and the easier classes in the grade. Additionally, many schools have canceled their finals, including Hingham High School, leaving many students without an end of the year test.

The major problem in holding the AP Exam would be ensuring equal opportunities for all students, whether that related to technology or to the time of the test. Every student needed a device, a quiet testing place, and no prior knowledge of the questions. In addition to these benchmarks, there was also the massive issue of cheating. An at-home, online test opens opportunities for students to gain an unfair advantage by searching the web or looking at notes. In order to counter such actions, the college board made the exam open note, although shortening the time to take the test to reduce reliance on notes mid-test.

Usually, the test is an in-person, two or three-hour test with multiple-choice questions, and essay questions, based on which exam is being taken. The exam is scored using a five-point system, with a five as the highest score possible. The altered exam has only one or two questions, with a generalized emphasis. This has also brought changes to many rubrics, such as the AP World History course, where the seven-point essay rubric was changed into a specialized ten-point rubric, used for this year only.

Additionally, the medium for the exam has differed from previous years. Most would assume since it is an at-home exam organized through a website that it would be a strictly online exam. However, the College Board has adapted several different submission methods, allowing students to submit handwritten work through a photograph. This has been especially important to various different exams, as for those who prefer to handwrite essays have benefitted from this change, as well as science-heavy exams, as it can be difficult to do work out in Google Docs.

Overall, students at Hingham High found the AP Exam easy to access and fair. William Bernstein, a sophomore who took AP Modern World History, described the exam as going, “pretty well, and I did not experience any technical difficulties.” However, students around the country did experience occasional technical difficulties. A Florida Junior, Maggie McLauchlin, experienced a black screen as she attempted to submit her AP Chemistry Exam, requiring her to schedule a retest. Such occurrences, although easily fixed by a reschedule, email, or complaint, bring added stress to the student, as students have been preparing for the test since the beginning of the school year. To see hours of work be wasted because of spotty wifi or other basic technical difficulties is disheartening to the student.

Due to the lack of control students have over technical difficulties, the College Board allowed email submissions containing the online document or photo of the exam. This was implemented several days after the beginning of the testing, benefiting those who had a later exam day. Along with email submissions, the College Board released suggested browsers on which to take the exam, allowing students to anticipate technical difficulties and change their testing plans.

However, considering the three million students who took AP Exams, the startling lack of glitches, bugs, and technical difficulties, supported by various failsafes, made the changed testing program a success.