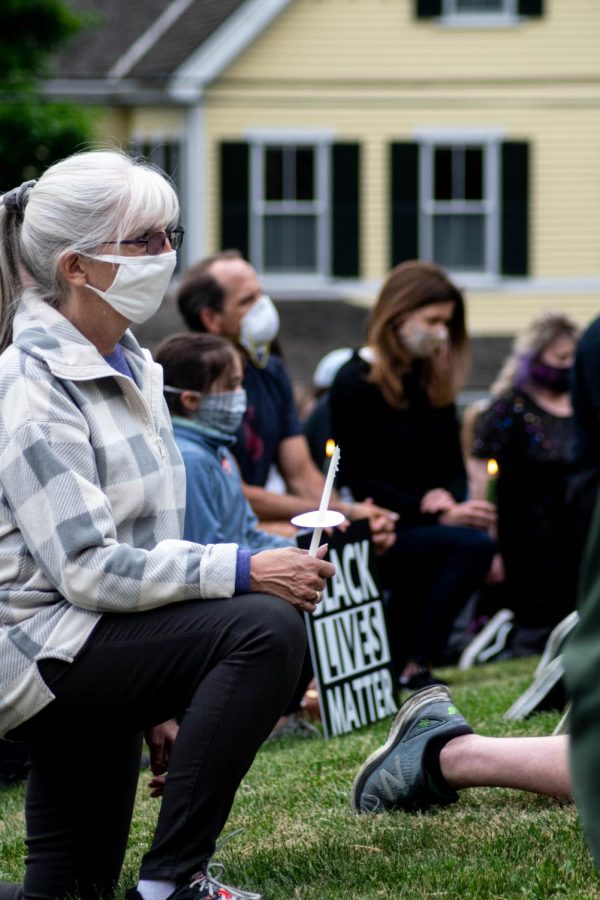 More individuals kneel during the moment of silence.

On Tuesday, June 2nd, residents of Hingham gathered together at St. Johns church to stand in solidarity for George Floyd, victims of police brutality, and the Black Lives Matter Movement. On May 25th, George Floyd, a 46-year-old black man from Minneapolis, Minnesota, was killed when Officer Derek Chauvin, a white police officer, kneeled on his neck for eight minutes and 46 seconds. Floyd’s dying words, “Officer, I can’t breathe,” now serve as the nation’s battle cry for justice.

Watching these events unfold, the University of St. Andrew College student and HHS alum Claire Taylor verbalized her frustration, stating, “George Floyd’s death was disturbing, but not shocking to me. Policing has been a historically racist institution and in recent years this racism has been showcased by the horrific deaths of many black men, women, and children murdered by police officers. I think George Floyd’s death scene on video was so extreme and distressing that it woke a lot of people up about the need to be actively anti-racist for this systematic issue to be solved.”

Protests against racism began in the streets of Minneapolis shortly after Floyd’s death, but they soon spread across the country and beyond. Activists representing all races share a common plea for the end of police brutality and systematic racism to the Black Community, calling for concrete legislation to ensure that equality will be enforced and a demand for better police training.

The majority of protests remain peaceful, but some have escalated into violence through agitation from both the police and protesters. Looting and destruction have filled the streets while police respond with tear gas, rubber bullets, and pepper spray to break up protesters.  Through these demonstrations, many plead for leadership, answers, and justice, while a neglected dialogue about white privilege is finally entering the mainstream.

Through Hingham’s June 2nd demonstration, citizens stood in silence for eight minutes and 46 seconds: a powerful reminder of just how long Chauvin pressed his knee on the non-combative and then finally non-responsive Floyd.  Before the moment of silence commenced, Reverend Tim Schenck, Rector at St. John’s Church shared, “The problem with vigils, of course, is that there is potential for the action to stop here. This event is only meaningful if it leads to deeper connections to action, to deeper conversations, and ultimately to change within the wider Hingham community.”

What happened next proved to strike many with an intense sense of compassion and understanding for the Black Lives Matter Movement. Teachers, students, and community members alike stood together, bowing their heads or kneeling in solidarity, actively changing perspective on our community’s own embedded privilege.

Junior Laura Dodd was one of the many high school students who showed up for the cause, reflecting, “I am so glad I got to be a part of such a beautiful event. It was amazing to see so many people come together and show their support for not only George Floyd and his family, but for every person of color and the Black Lives Matter movement. It was one of the most beautiful things that this town has done.”

Another Hingham resident, Sonya Fairhurst, spoke about the next generations’ prominent activism, explaining, “As a person of color seeing the support and recognition of issues that black people face, made me proud to be apart of this community. It gave me hope to see so many young faces in the crowd and to know they will be the voice and allies needed to bring about change.”

Hingham social studies teacher Mrs. Susan Petrie attended the vigil with her children, explaining the importance of educating the next generation on both activism and our history with racism: “As important as I felt it was for me to participate and show my support for the Black Lives Matter movement, I felt it was even more important to bring my own children. We have had many conversations and read many books about issues around race and racism, but I wanted the boys to be able to actively participate in an event where they could show their support and see that there are many others who care and want to make the change as well.”

The enlightening events have sparked a new dialogue addressing our own communities’ lack of diversity, for its population is over 96% white. However, it is not a coincidence that Hingham is the way it is. Many have debated there is a direct correlation with “Redlining,” a process established decades after the Civil War where banks and mortgage lenders drew red lines to mark neighborhoods as desirable and undesirable, using racially influenced tactics to refuse certain families from qualifying for loans, purchasing a home, or receiving health care. While these systems have been long abolished, racial neighborhoods still define the greater Boston area today.

While these topics are not readily talked about in all classes, some selective history and English Classes like American studies and Modern Dilemmas do touch upon these topics. Even so, many participants at the vigil voiced a hope for more black history to be incorporated into the school curriculum at an early age. Taylor explains, “I think as a town we need to acknowledge that racism is the reason Hingham is almost entirely white today and always has been. I think that awareness and discussions of white privilege starting at an early age will allow and encourage younger generations to grow into aware, anti-racist, and empathetic adults.”

Whether anti-racism action is taking place online through hashtags, on the streets through vigils and demonstrations or through donations to prominent funds, a movement is among us, changing long-standing perspectives on how equality is enforced in our government. Prominently white communities like Hingham may not ever truly understand the struggles the black community has faced and continues to face, giving many an incentive to listen to stories of oppression, have uncomfortable conversations about race, and finally begin to change the system that prohibits America from being authentically equal.

Join the Hingham community in their stand on systemic racism, recognizing our faults in the past, and amplifying the voices of the oppressed.

If you want to make a change, but struggling with how to start, here are some helpful resources on how to form meaningful conversations about race and discrimination.

Raising White Kids’ Author on How White Parents Can Talk About Race -NPR
How to Talk to Your Children About Protests and Racism -CNN Article
Education Talking to Kids About Discrimination -American Psychological Society
How Do You Talk with Young People About Police-Related Violence -NPR
How To Talk To Your Kids About Race and Justice -NPR
How Can We Broach Hard Conversations With Kids, From Race To COVID-19? -Liz Kleinrock