The Murder of George Floyd and How the Public is Responding 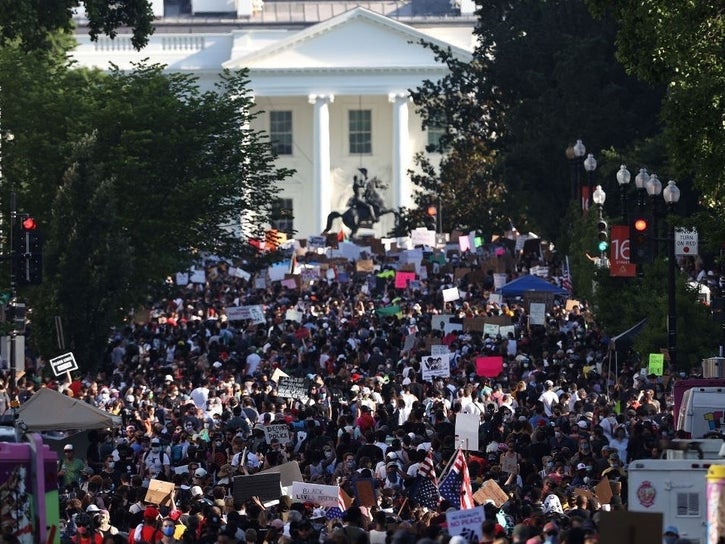 Protests gather outside of the White House in Washington DC.

On May 25th the public was shocked by a video going viral on social media. The video, filmed by a bystander, showed a black man by the name of George Floyd pinned to the ground by a white police officer who was kneeling his neck. The footage displayed Floyd shouting that he couldn’t breathe as he begged to be allowed air.

Floyd eventually lost consciousness as frantic onlookers shouted that he doesn’t appear to be breathing and that his nose had started to bleed. Still, the officer did not remove his knee until one full minute after paramedics arrived, and long after Floyd had lost consciousness. He kneeled on his neck for 8 minutes and 46 seconds. George Floyd was proclaimed as dead later that day. The officer, Derek Chauvin was charged with murder and manslaughter the next day.

This video took the public by storm and spurred a great uproar as it highlighted the issue of systemic racism in our nation. The public responded with a series of protests, many of them led by the organization Black Lives Matter.

Minneapolis-On May 26th, one day after George Floyd was murdered, protesters took to the streets. The protests were designed to display the frustration the people of Minneapolis had with their police department and to call for the arrest of the officers involved. Though the protests began peacefully, they eventually turned violent and led to the vandalism of the third precinct building and rocks being thrown at cop cars.

The protests continued on the 27th as they began to spiral out of control. The police fired rubber bullets and teargas into the crowd of protesters and the police precinct’s windows were smashed in by the protesters. The looting began that day as well and it was also when an unidentified white man with a gas mask and an umbrella was filmed breaking windows of an Auto Zone.

On the 28th, a state of emergency was declared in Minneapolis. Rioters continued to loot and set fire to buildings across the city. On that day, the third precinct building was lit on fire. On the 29th the Governor of Minnesota signed an executive order to send Minnesota’s national guard to stop the rioters. The governor also imposed a curfew from 8:00 pm until 6:00 am. The rioters ignored this curfew and continued protesting until around midnight when the military and police began using force to keep them back.

On May 30th, new information arose that not all of the rioters were from the Black Lives Matter Movement. It is unknown if the rioters are white supremacists trying to corrupt the cause or anarchists who jumped at the chance to cause chaos. The most recent news pertaining to the Minneapolis protests is that the mayor of Minneapolis was booed on June 6th when he announced that he did not support abolishing the police in that city.

Los Angeles-The bulk of protests in Los Angeles took place on June 6th. The Los Angeles Times reported that several thousand people came out to multiple protests throughout LA to show their support for the Black Lives Matter Movement. The protests were largely peaceful and despite the presence of national guard members, a riot did not break out.

New York –The protests in New York City began on May 28th, three days after George Floyd was killed. Around 100 protesters

marched on Union Square. The protests were largely peaceful, though there were some conflicts between the police and protesters. The protesting continued on May 29th around Foley Square in Manhattan.

Though they began peacefully, the protests eventually became more violent as the day progressed. At Barclays Center, protesters clashed with the police and many were pepper-sprayed and tackled. Protesters attempted to break into the 79th precinct, though the majority of them were arrested. On May 30th, a vigil was held for George Floyd on Staten Island.

On May 31st a number of peaceful protests were held with minimal police interference. Events unrelated to the majority of the protests that day took place at Union Square where multiple fires were set and violent riots of looting took place. On June 1st, the mayor of New York imposed an 11:00 pm curfew for the city. Additionally, a candlelight vigil was held.

Despite the curfew, looting and rioting continued after 11:00. Though the damage was minimal, the defying of authority served as a symbolic message that the public has lost trust and faith in a system that fails to protect them.

On June 2, the curfew was moved to 8:00 pm. Protesters carried on peacefully during the day. An interesting event occurred when around 100 doctors went to time square to show their support for the movement and call out how COVID-19 has disproportionately affected people of color.

June 3rd resulted in more arrests of people who violated curfew, although cops waited until 9:00 before making them. On June 4th, Terrence Floyd, the brother of George Floyd gave a speech where he stated that he supported the protesters but condemned the rioting and the violence. For live updates, click here; https://www.nytimes.com/2020/06/06/nyregion/nyc-protests-george-floyd.html

Boston-Protests in Boston and its surrounding towns have been going on for the past week. The major protests took place on May 31st. They were peaceful the entire day until around 9:00 pm. First-person accounts say that police officers drove into the crowd of peaceful protesters once they reached the State House. Police then fired tear gas into the crowd and the violence began. Accounts say that groups of people unrelated to the peaceful protests all-day began to spread the looting and violence. More information about how the event occurred can be found here; https://www.wbur.org/news/2020/06/04/boston-protests-sunday-peaceful-police

Washington DC-Protests in Washington DC have been largely peaceful. Each day, thousands of protesters flood the streets of Washington DC to declare their support for Black Lives Matter and their rejection of the systemic racism that has plagued our nation. There is very little violence on the part of the protesters, though the president has ordered military intervention to break them up. Get live updates here; https://www.washingtonpost.com/dc-md-va/2020/06/07/dc-protests-sunday-george-floyd/

President Trump’s response to the protests has sparked controversy across the nation. Much of the controversy began on May 29th, with him declaring on Twitter that he would send the US military to Minneapolis to quell the riots if the governor of Minnesota would not. He also criticized the mayor of Minneapolis for being weak and unable to stop the riots.

Trump declared in a speech that governors must “dominate” the protesters. This comment sparked public outrage as he ignored their reasons for protesting. Since the beginning of his presidency, Trump called himself a strong “law and order” president. In his speeches, he was clear he wanted to fulfill that role, offering little sympathy or exception for the reason why the people were protesting.

On June 2nd, after Trump made remarks about dominating protesters, he ordered the military to tear gas a peaceful protest so that the crowd would be cleared away. From the Rose Garden in the White House, he walked to St. John’s Church. In front of the church, he posed for cameras, holding up a bible. This purpose of this photo-op confused the public.  Many took to social media, calling the incident hypocritical, since many view the bible as a symbol of peace, yet here the president held it directly after tear gassing his own citizens.

Across the world, people in more than 100 countries have rallied in solidarity with the American anti-racism protests, demanding justice for George Floyd and an end to systemic racism everywhere. Protests were staged in front of US embassies and consulates in Britain, Germany, France, Denmark, Italy, Nigeria, Brazil, Mexico, Ireland, Poland, Russia, Slovakia, and many other countries.

In Australia, protesters gathered in Perth’s Central Business District to show solidarity with US protesters and demonstrate against the treatment of minorities in the country. In Syria, artists Aziz Asmar and Anis Hamdoun created a mural to honor Floyd; in Kenya, artist Allan Mwangi did the same. Ghanaian President Nana Akufo-Addo wrote in a tweet that “black people, the world over, are shocked and distraught by the killing of… George Floyd.”

In Milan, a flash mob gathered outside the US consulate in support of the Black Lives Matter movement. In Dublin, protesters streamed down the streets while chanting “I can’t breathe,” Floyd’s last words. Anna Hervin, who marched in Dublin, told CNN that “The protest was a show of solidarity with our friends in the US but also a united stand against endemic racism, which is a global threat.”

Sarah Neus, a high school sophomore living in Argentina, explained how Floyd’s death impacted her country, saying “Argentina is still on lockdown, so we can’t really go outside. There have been protests, but I haven’t heard much about them.” Despite this, Neus, like many teenagers around the world, has taken action against systemic racism on social media and is deeply angered by Floyd’s death.

Such international outrage is unprecedented, and as unrest continues to grow in the US, more protests are expected to occur worldwide.