The Return: What Sports Are Planning On Doing To Wrap Up Their Seasons 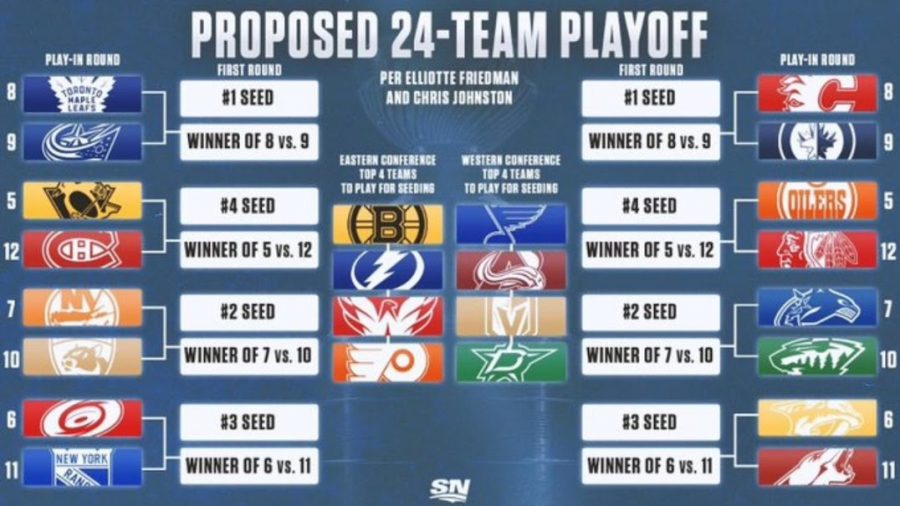 The new format for this years NHL playoffs

For the last few months, most sports have been postponed to unofficial dates due to the COVID-19 pandemic. However, as the cases start to decline and states are starting to reopen, league owners have announced specific details on what the rest of the season will hold.

Beginning on July 31st, the NBA is set to return using a 22 team playoff format instead of its usual 16 team playoff. The whole tournament will be held in Orlando, which will make the playoffs similar to the SuperBowl in the NFL, a neutral setting. The NBA has also announced they will be adding a unique play in-game for the bottom seeds in the tournament.

The NHL is also planning to start sometime in July barring any setbacks in positive Coronavirus tests. The league has decided to hold a 24 team postseason format, including a play-in round. The top 4 seeds will earn a first-round bye to start off the tournament.

For the MLB, the players and owners are not agreeing to any terms. The league will definitely be shortened, but the owners want to pay the players less money. The players are refusing to play unless they get full pay, so the league may take longer to start.

Unlike the NBA, NHL, and MLB, the college basketball NCAA tournament and the XFL have taken some dramatic falls. The NCAA tournament that was scheduled for March was canceled, along with other winter championship events. After what seemed like a successful first season for the XFL, it filed for bankruptcy three days after the league was postponed due to the virus. The XFL has tried multiple times to become a successful league but has never prevailed.

This year’s summer Olympics was to be held in Japan but has been postponed until 2021. In golf, the PGA tour canceled The Players Championship, postponed the Master’s, and canceled the British Open. Horse Racing is scheduled to pick back up on September 5th with the Kentucky Derby, followed by the Preakness Stakes and the Belmont Stakes.

As summer approaches, hope arises for some of the nation’s favorite sports to return. Sports fans around the world will have a chance to watch all of their favorite sports at the same time. How will the new formats and dates affect the players moving forward? Drop your comments below.