Our First Positive Case: What Does This Mean? 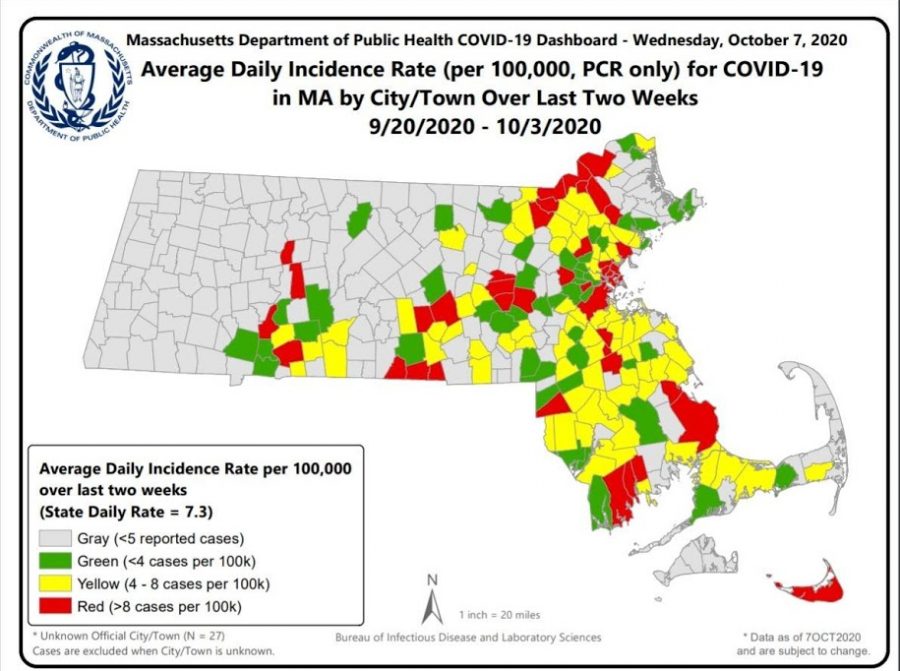 This Map places Hingham in a higher risk territory within Massachusetts. We're within the range of 4-8 cases per 100k.

Within just the first week of the new hybrid system, there’s already a student who tested positive for coronavirus. What does this mean for the remainder of the year, and what kind of decisions does it pose to the student body and staff of Hingham High School? Before we get into all of that, I want to express my sympathy and understanding to the student and their family. Just know that your community has your back.

hat this positive case did not shock anyone. The one thing everyone agreed on was that “it was going to happen eventually.” Which brings up this question: if the school committee was thinking this way too, why did we still reopen? Everyone seemed to know that a student would eventually test positive, and Mr. Swanson even said in his announcement that they “have been planning for this scenario during our reopening planning process and have a comprehensive plan in place.”

No one was caught off guard. Ella Niehoff, a student in the junior class, has some thoughts on this. She supports the argument that our education is at a higher risk than our health and comments that “the US cannot put itself on pause for the <2% death rate”, and even says “the Hingham High School must open back up fully.” On the other side of the spectrum, student Inga Andruszkiewicz believes that we shouldn’t have even “done hybrid to begin with: a bunch of schools started sending kids back before us and had to stop again because of a rise in cases, so why would we be any different?” With such polarizing ideas, there doesn’t seem to be a clear idea for the future. A huge benefit of the hybrid system,

though, is that it allows for students and families to determine their own fate; you can stay home if you want to, or attend school, it’s up to you.

How does the first COVID-19 case from our school impact the course of the school year? I interviewed student Kaleigh Cirafice because she chose to switch to online classes when hearing the news about the case, as I’m sure many others did. When asked what motivated her to specifically make the call and stay home she responded, “I reached the decision to stay home due to my previous health conditions as well as the idea that more people could have been exposed and just aren’t showing symptoms yet.” She brings up the point that she was able to make this switch in her schedule seamlessly, so the hybrid system seems to be working. Let’s say she’s correct, that many other students are already sick. What are people’s general thoughts on this?

I’ve taken a poll in the past week. I asked twenty students how many positive cases they think would warrant a school closure. The answers ranged from just one case all the way up to one student saying “the number of cases that causes hospitals to be overrun should warrant a school closure.” However, a common answer to this question was that it’s not exactly a number of cases; the school needs to close when the rate of students getting COVID-19 goes up too high. One student specifically said that “if above 10 percent of the school gets it, then we need to close.” To sum up, maybe one case isn’t enough to close down the school, or maybe it is, but it definitely starts a conversation.