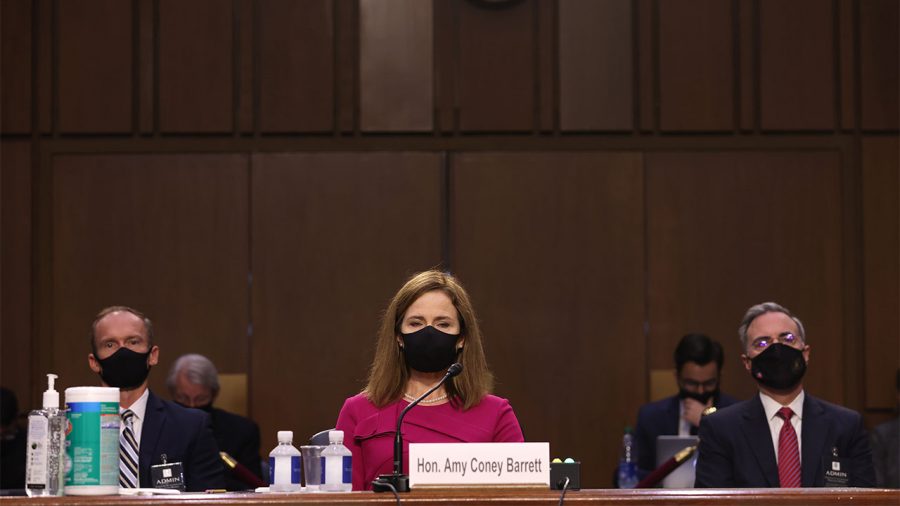 As you might have seen recently, the nomination of Judge Amy Coney Barrett to the Supreme Court has been a hotly contested issue because of the upcoming election. There has been much discussion over whether President Trump should be able to appoint a judge at the end of his first term. The Senate set the precedent when President Obama tried to appoint Judge Merrick Garland during his last term as president. However, Senate Majority Leader Mitch McConnell denied this appointment, stating, “Let the American people decide”. Yet the hearings did not reflect this conflict, focusing instead on the policy of Judge Barrett and views on cases such as Roe v Wade and the Affordable Care Act. When asked what they think about the hearing sophomore Will Baker said, “There is a lot of controversy on her nomination because of her conservative views”. When asked if she should be confirmed at all, Will said “I do not feel like anyone from either party should be confirmed during a major presidential election.”

Throughout the hearing, Judge Barrett repeated how she would not have a political agenda if confirmed, saying ”Judges cannot just wake up one day and say: ‘I have an agenda. I like guns. I hate abortion,’ and walk in like a royal queen and impose their will on the world.” Committee members mentioned statements made by the president about appointing judges that share his views. Barrett denied any influence of the president over her. When asked if he believed that Barret would not be influenced by Trump, sophomore Sam Benham replied “ I think Amy Coney Barrett will not be a pawn of Trump because she is a smart, educated person”.

One of the major controversies of the hearings came when Judge Barrett was asked a question about LGBTQ protection under the law Barrett responded “I do want to be clear that I have never discriminated on the basis of sexual preference and would not discriminate on the basis of sexual preference.” This sparked outrage from the members and supporters of LGBTQ who deem the term as offensive. Barrett then apologized, saying she would never have used the word if she knew it offended anyone.

An emotional moment came when discussing the issue of race. When asked about how the death of George Floyd affected her, Barrett recalled how she wept with her daughter, who is adopted from Haiti and black, about how racism persists in America. They also discussed the terrifying idea that this could happen to her or her brother, who is also adopted, and how things must change.

Barrett did not directly answer many questions throughout the hearing. Instead, making clear that she will use the constitution and only the constitution to make her rulings and that she would be fair in hearing both sides of the argument. There was no drama of the Kavanaugh hearings and little of the issues of confirming before the election or court-packing mentioned. It is unclear what Barrett’s confirmation will mean for cases such as Roe v Wade and the Affordable Care Act. She has assured the committee that whatever she will decide will be based solely on the constitution and previous rulings. Moving forward, as Republicans have the votes to confirm Judge Barrett, and a vote by the Senate judiciary committee will occur next Thursday. Unless Senate Democrats find a way to delay the vote, the United States Supreme Court will soon feature Justice Barrett.